This year’s Isle of Man Classic TT will celebrate the life and career of Steve Hislop, one of the greatest British motorcycle racers of all time. ‘Back to the Future: The Hizzy Years’ takes place 30 years after Hislop set the first ever 120mph lap around the TT Mountain Course, a speed that remains a benchmark for competitors three decades on.

The event will see the career of the brilliant but sometimes enigmatic Scottish rider recognised, with fellow Scot Brian Morrison and a replica of the 1989 Honda RC30 just one of the combinations taking to the 37.73-mile TT Mountain Course in memory and appreciation of their former rival.

With two TT wins under his belt as well as some stunning performances on the Honda RC30 in the 1988 Formula One and Senior TT’s, it was little wonder that Honda Britain retained the services of Steve Hislop for the 1989 season.

The Japanese giant were celebrating their 30th anniversary at the TT in 1989 and had a formidable looking line-up with Joey Dunlop leading the team on a full factory RC30 and ably supported by Hislop, Morrison and Carl Fogarty on the kitted versions of the all-conquering machine.

However, with Dunlop out of the TT due to serious injuries sustained in the Eurolantic Races at Brands Hatch on Good Friday, the responsibility of giving them success suddenly fell on Steve’s shoulders.

Contrary to popular belief, Hislop didn’t receive Joey’s full-factory RC30 for the TT in 1989 but two weeks before practice got underway, Honda flew over a crate with a simple ‘TT F1 – Mr Hislop’ label on it. It was an unexpected surprise and although not identical to what had been assigned to Dunlop, was a hand-built, no-expense spared factory effort with a factory exhaust, full-blown F1 engine, carbon fibre bodywork. In essence, it was everything he could have possibly wished for.

However, it wasn’t until Wednesday of practice week that he rode it as its late arrival meant it was still being painted. The plan was to have it painted in the traditional red, white and blue colours of Honda – which Morrison and Fogarty had theirs painted in – but, instead, the time constraints meant they settled with a simple, two-tone red and white colour scheme. Honda’s top man in the UK at the time, Bob McMillan, allegedly wasn’t impressed but by then it was too late!

Steve had already broken the 120mph barrier with the less-kitted RC30 on Tuesday evening which showed how good that bike was and also how well Steve was riding. He didn’t need a factory bike to break records and make history, but it was good all the same! A lap of 121.99mph duly followed on Thursday evening of practice week.

The race results for the Formula One Race show that Steve beat Morrison by more than two minutes and a number of photographs show just how light the bodywork was as the front end, where the big number six plate was, simply got crumpled by the wind along the high-speed straights around the TT Mountain Course.

Given his laps in practice, there’s no doubt Steve would have broken the outright lap record on either bike and the quality of the kitted bike could also be seen in the race when, despite being so far adrift of Hislop, Morrison’s own impressive pace on the less-kitted RC30 saw him set two 120mph+ laps of his own.

Thirteen months older than Steve, the Kirkcaldy rider had come through the ranks at a similar time but it wasn’t until 1988 that their paths crossed on the track, as whilst Hislop had opted for out and out race bikes to start his career, Morrison had gone down the production bike route.

However, just like Honda started supporting Steve in 1988 on the back of his two-stroke achievements, they did the same to Morrison after his performances on the big 750cc and 1300cc production bikes, which included podiums at the 1986 and 1987 TT races.

Backed by Northern Ireland car dealer Francis Neill, Morrison dominated the short circuit scene on the RC30 in 1988 and with no less than 10 wins in the 12 rounds, won the MCN Superstock Championship by a whopping 93½ points, whilst he also took the British Seniorstock 600cc Championship.

Hislop was one of the few riders to get the better of him that year, winning a Superstock round at Mallory Park. And whilst Hislop ultimately prevailed at the 1989 TT, Morrison more than proved his credentials in the runner-up position.

Laps of 120.03mph (lap two) and 120.18mph (lap six) made him the second rider to break the 120mph barrier and they were the only two riders to achieve the feat that year. Not only did this demonstrate the strength and performance of the Honda RC30, but also that of the Scottish contingent around the Mountain Course, something that was repeated in later years by the likes of Ian Simpson, Iain Duffus and Jim Moodie. 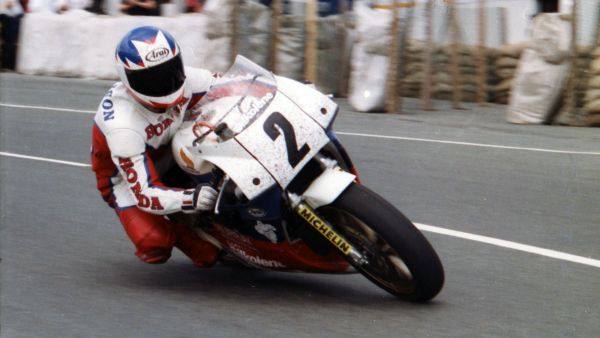 Brian Morrison on his Honda RC30 during the 1989 Formula 1 TT. Image courtesy of FoTTofinders

Hislop and Morrison competed against each other at the TT for two more years, with Morrison finishing third on a Loctite Yamaha behind Steve and Fogarty in the 1991 Formula One Race when he recorded his best ever lap at 121.64mph. But their short circuit duels continued for the rest of the decade. Indeed, they became team-mates again in the World Endurance Championship when they rode for Kawasaki France, but in 1989 it was the Honda RC30 that reigned supreme.

As part of the 'Back to the Future: The Hizzy Years', Brian Morrison will ride a replica of the 1989 Honda RC30 ridden by Steve Hislop as part of the demonstration lap on Saturday 24th August.