After finishing third overall in the 1998 British Superbike Championship, the following two seasons were turbulent times for Hislop. When Rob McElnea’s Yamaha team lost their Cadbury’s sponsorship, they cut back to a one-man outfit and Hislop was shown the door, joining Kawasaki UK for the 1999 season as team-mate to Chris Walker. The pair rode Kawasaki ZX-7RRs but whilst Hislop rode a year-old version of the machine, Walker opted for the kit bike and it proved to be the right decision.

A brace of fourth place finishes at Thruxton was the best Hislop could manage in the early rounds and he was relieved of his duties mid-season by team manager Simon Buckmaster, in uniquely 90’s fashion – via fax. Former boss McElnea managed to pull some extra budget together and after missing three rounds Hislop rejoined his old team, now backed by Richard Branson’s Virgin group, for the rest of the season.

Understandably, he remained with the team for 2000 and the season started well with five podiums in the first half of the season. However, in a wildcard appearance at the World Superbike Championship round at Brands Hatch later that year, Hislop was the innocent victim of an horrendous-looking first corner, first lap crash. He suffered broken bones in his neck and a damaged spine but miraculously escaped paralysis.

He made a full recovery but found himself again searching for a new team for the 2001 season.

Eventually, Hislop signed for Paul Bird’s Monstermob Ducati team to ride a Ducati 996 in the BSB series. Winning races from the outset and disputing the title with former team-mate John Reynolds, the duo traded race wins all season long and going into the tenth of twelve rounds, Hislop led by 25 points after taking twelve wins and eight additional podiums – but his bad luck was to return.

At the penultimate round at Rockingham, he touched the rear wheel of Reynolds’ bike and slid under the air fencing and into the wall. The end result was a dislocated foot, a compound fracture of the fibula, a broken collarbone and another early end to the season.

Nevertheless, Hislop returned stronger than ever for 2002. He and the new Monstermob Ducati 998 Testastretta were the ones to beat. If anyone needed to be reminded of just how special and talented Hislop was, they only have to look at the 2001 and 2002 seasons. There was still the odd lowly finish but the wins came frequently and the sight of Hislop and the Ducati working as one was poetry in motion, particularly at circuits like Oulton Park and Cadwell Park where he truly excelled. 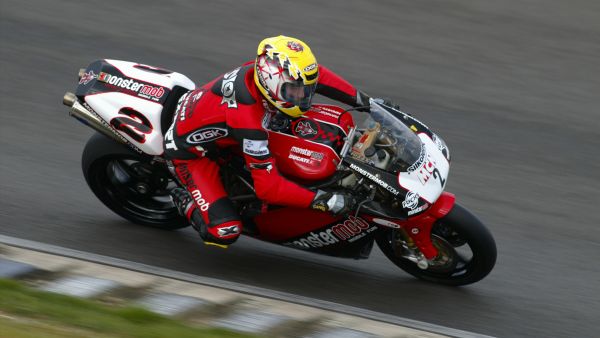 Hislop in action on the PBM Monstermob Ducati 998 in 2002. Image courtesy of Double Red

But Donington Park would be the venue for his most stunning performance when, in 2002, he produced one of the greatest laps in motorcycle racing, delivering a BSB qualifying lap that not only gave him pole position but also saw him lap quicker than Valentino Rossi’s MotoGP lap record onboard his factory Repsol Honda RC211V machine. It was a performance that rightly made the headlines, not just in the UK press, but worldwide too. If ever there was a time when Hizzy proved he was a world class rider then this was it and it remains one of the most talked about BSB feats to this day.

Having won eight races during the course of the year, Hislop ended the 2002 season with second and third place finishes at Donington and was duly crowned the 2002 British Superbike Champion.

It was his second BSB title with a Ducati and it would be fair to say that some of the finest moments of his career came whilst riding for the Italian manufacturer. Therefore, it’s only appropriate that his championship winning 2002 Ducati 998 be ridden in this year’s Classic TT ‘Back to the Future: The Hizzy Years’ Parade by a rider who is not only synonymous with the Ducati brand, but also one of Hislop’s main rivals – Carl Fogarty.

The duo came through the ranks together and were the frontrunners in a golden era of racing at the Isle of Man TT at the start of the 1990s. Whilst they were often aiming for the same goal and often on the same machinery, their careers ultimately took different paths with Fogarty making the step to the World Superbike Championship with great success.

However, whilst the press built their rivalry up to be one of mutual disdain, the opposite was in fact true. There were inevitably occasions when the pair didn’t see eye-to-eye but they remained friends throughout, holding each other in the highest regard.

Indeed, in his autobiography, Hislop revealed that Fogarty had offered him a ride in his new Foggy Petronas team to enter the 2002 World Superbike Championship, whilst he also went on record to say Fogarty was the rider he had the most respect for: “I have some racing heroes like Wayne Rainey, Mick Doohan but would have to say I have tremendous respect for Carl Fogarty, having come up through the ranks with him from the mid-80s. You just cannot believe the sheer aggression this man has, that never say die attitude, maybe this is what I lack, that final ingredient between being an average rider at international level to being a World Champion!!!”