After the frustrations of Saturday’s truncated session, the 2019 Classic TT Races presented by Bennetts roared into life this evening shortly after the scheduled 6.20pm start.

The headlines were made by two established TT stars. Dean Harrison, who picked up where he left off in June when he won the Dunlop Senior TT, with the fastest lap of the evening on his Silicone Engineering Classic Superbike and Bruce Anstey, who put a two-year absence with illness behind him with the fastest lap in the Dunlop Lightweight Classic TT class.

The Superbikes and Lightweight machines were first out on the TT Mountain Course.  Harrison, who has won the last two RST Classic TT Superbike Races, was first away on the Silicone Engineering Kawasaki with Michael Rutter alongside him on the Team Winfield Yamaha. The first pair were followed ten seconds later by James Hillier on the Oxford Products Ducati and Jamie Coward on the Prez Racing Kawasaki.

Rain had been reported earlier in the evening, but the cautionary lack of adhesion flags didn’t seem to dampen spirits or lap speeds. Harrison’s standing start opening lap of the meeting (123.42mph) topped the board on the night before the Bradford rider came in at the end of his opening lap, pointing at a loose exhaust. Harrison switched machines and headed straight out on his Lightweight bike – the Laylaw Racing Yamaha - and promptly clocked a lap of 114.28mph, which was second only to Anstey, before coming in with a quickshifter issue. 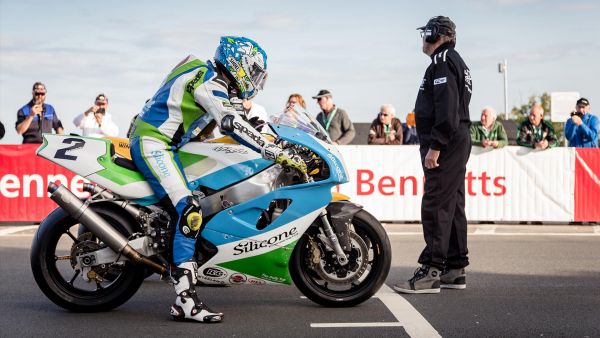 Dean Harrison was fastest in the opening Superbike qualifying on the Silicone Engineering Kawasaki ZXR750. Image courtesy of Lucas Croydon

After the session Harrison talked about the challenge of switching from his BSB Superbike: “I’ve come straight from Cadwell and BSB to the Classic TT. The ZXR isn’t such a big jump but riding the 250 is chalk and cheese. I’ve not got much experience of the two-stroke but you’ve got to respect the little thing because it will bite you.”

Lichtenstein-based rider Horst Saiger clocked an average speed of 118mph on his opening lap and then improved this to 122.87mph – the second fastest on the night - while Derek Shiels and Jamie Coward both posted 118mph+ opening laps with Coward improving to 120.70 which put him third on the overall Superbike leaderboard.

Early retirements on the opening lap included Paul Jordan on the Mistral Racing Kawasaki, who stopped at Ballacrye and Lee Johnston on his Lightweight Binch Racing Yamaha at Douglas Road Corner, while Gary Johnson (Team York Suzuki) retired on his second lap of the Superbike session at Quarterbridge.

Anstey put a two year TT Mountain Course absence behind him and blasted to an opening lap of 110.84 on the Padgetts Yamaha, while Daniel Sayle on the John Chapman Racing Honda showed that he had recovered from injuries sustained at last year’s Classic TT with an opening lap of 109.90mph. 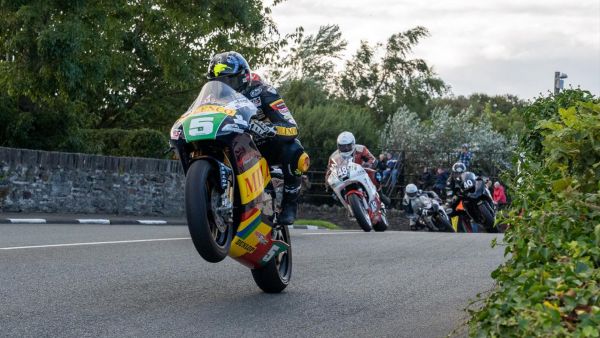 After the lap Bruce Anstey said: “It was great to get out and on the second lap things clicked and it felt like normal and as though I’d never been away.”

After the New Zealander’s lap, an elated Milenco by Padgetts Motorcycles team boss Clive Padgett said:  “I’m just over the moon. We said to Bruce before the lap if you’re not feeling it we’ll pick you up at Ballacraine. He’s loving life – it’s incredible. He was smiling from the off and all the fans are so pleased to see him back and we’ve had so many great comments.”

The Junior and Senior machines were away shortly after ten past seven with Team Winfield rider John McGuinness on the twin-cylinder Paton and Ripley Land Racing’s Michael Rutter on the single-cylinder Matchless jostling for position alongside each other on the start line.

However, shortly after the second session began, the session was red flagged following an incident at the Black Hut. The rider concerned was taken by airmed to Nobles Hospital with a reported leg injury and riders were brought back to the Grandstand in course direction under the direction of Travelling Marshals.

With the lost time and light fading at the Grandstand, the second session for Senior and Junior machines and the scheduled Newcomers session was cancelled.

Roads are due to close tomorrow at 18.00 with the Lightweight and Superbike Classic TT machines due out at 18.20 and Senior and Junior bikes at 19.15.

For further information about the festivities across the Classic TT weekend, visit the Festival Pages.