FROM BRISBANE TO BRAY

Murphy's First Law: Anything that can go wrong will go wrong. Murphy's Second Law: Nothing is as easy as it looks. Murphy's Third Law: Everything takes longer than you think it will.

At the time (1953) BSA trumpeted Kevin Murphy’s achievement as the first motorcycle journey from the Colonies to England. Not that it was completely uncharted territory, but it was a bloody long way between Brisbane and Bray Hill. Nonetheless Kevin Murphy believed his Golden Flash was made for the job, though the top brass at BSA were hardly enthusiastic at first:

‘Whilst we do not desire to discourage you, we would point out your proposed trip to the Isle of Man on your A10 Golden Flash BSA Motor Cycle would be somewhat of a formidable nature… Possibly, you may wish to give thought to either taking a ship to Italy, and from there either proceeding through France and from thence to England, or via Canada, or the United States. In either case, a fairly long sea voyage would have to be undertaken, but we do think that the comparative comfort of proceeding by either of the above routes, would be far better than the hazards, frustrations and disappointments, to say nothing of possible danger, by proceeding by the route outlined in your letter.’ 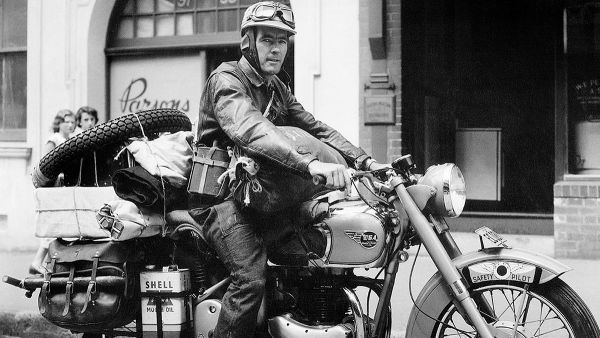 Ready for the ‘hazards, frustrations and disappointments’, Murphy is pictured here aboard his Golden Flash.

Intent on being a spectator at the Isle of Man TT, Murphy was by then already halfway to Sydney on his well-prepared mount. He was stopped in his tracks, however, by the need to put up a significant bond for a carnet – a decidedly unforeseen expense. Dad, or more likely Mum, came to the rescue with a money order and, somewhat aptly, it was April Fool’s Day when Murphy found himself in Adelaide, 2500km from home. He’d originally intended to save a few bob by riding to Fremantle in Western Australia, but it being Easter, the highly devout waterside workers had refused to see his machine safely aboard the ‘SS Stratheden’.

Two weeks after sailing from Adelaide, Murphy disembarked in Columbo and almost terminated his journey on the spot with a 75 mph low-side - becoming instantly aware that the mossy concrete roads in the tropics were a far cry from the dusty plains of the outback. Slippery, greasy and oily are the descriptions that litter Murphy’s diary; along with the complaint that nowhere was to be found a straight longer than a quarter mile as he traversed what was to become the ‘hippie trail’ barely a decade later.

From Sri Lanka, Murphy caught the ferry to Talaimannar and began his journey through India. With growing signs of British influence, the roads became a little more trafficable - though Murphy seldom saw much other than bullock carts, elephants, goats, pigs and hundreds of rapacious monkeys; one of whom he was certain stole his tool roll and eating implements! Unseasonal rain also slowed progress and an increasingly dispirited Murphy added surviving a tornado to his wordly experiences. 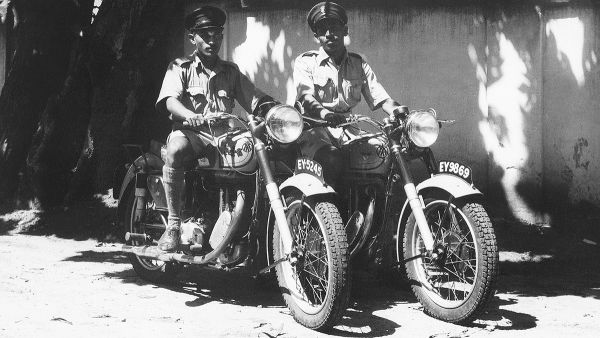 With a couple of frame fractures affecting the Flash, Murphy would be forgiven for thinking Murphy’s Law would dog him all the way to the Isle of Man. However, sometimes fortune favours the bold, and Murphy soon met an English Doctor who was so taken by the sense of adventure, he wanted nothing more than to experience the BSA first hand. Murphy was more than happy to oblige, spending 120 miles relaxing in the good Doctor’s Sedan DeVille in the welcome company of two nurses – Hazel and Gladys. Naturally a few beers and dinner followed once they reached Bombay. It was also in Bombay that the ever-helpful BSA agents replaced the Flash’s mirrors and other breakages, thoroughly serviced the machine and supplied Murphy with new tools, plugs and other expendables.

A month after embarking in Adelaide, Murphy rode into Agra and, whilst viewing the magnificence of the Taj Mahal, he reflected on his journey thus far. It was also in Agra that he chanced a meeting with an equally adventurous motorcyclist called Maahir Rajkwinar who had successfully negotiated a return journey through Iran to Czechoslovakia on his Panther 350. Maahir’s tales encouraged Murphy no end - even though the Pashtūnistān border wars had forced him to change plans and book passage from Karachi in Pakistan to Basra in Iraq. 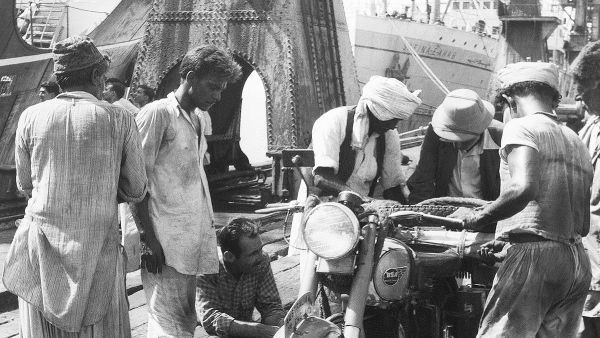 Loading up in Karachi for the voyage across the Arabian Sea and Persian Gulf.

The English translation of ‘kutcha’ is ‘makeshift’, and across the Great Indian Desert and Pakistan’s Thar Desert, the kutcha roads are merely theoretical. Where they do exist it’s largely because the barrages diverting water from the mighty Indus River create a network of dead-end drainage ditches. Here, Murphy’s pace slowed considerably - often averaging no more than ten miles an hour. The looming deadline for the voyage to Basra also caused him a number of sleepless nights spent in railway stations, while Murphy’s other problems included a fast-diminishing cash reserve, lack of fuel and deteriorating rubber.

It’s only to be expected that another spill almost proved too much for the intrepid Murphy. Just short of Karachi, whilst distracted by the increasing amount of canvas visible on his front tyre, a severe gust of wind sent Murphy hurtling down the hardpack. Once again most of the damage was superficial – gear lever, footrest, bars and twisted forks – and easily fixed once he reached Karachi.

Murphy, by now, wasn’t in the best frame of mind. Perhaps his severely bruised thigh and bout of dysentery tainted his outlook at this particular time, but the state of the vessel, the surliness of its crew and the cleanliness of his fellow passengers (not to mention the cuisine!) were all circumstances which saw him quick to disembark at Basra. 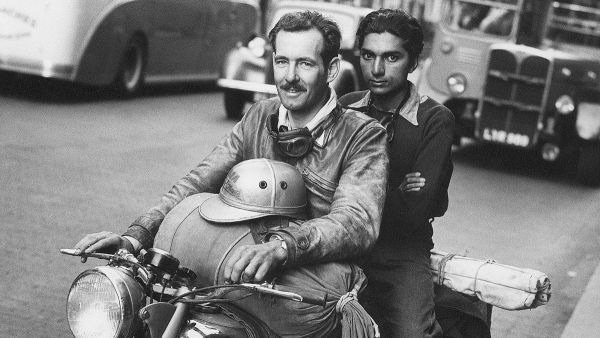 Not a grain of desert sand in sight, Murphy and Abdul pictured in London on the ever-faithful Golden Flash.

Murphy had few remaining Travellers Cheques so when the opportunity arose to carry a pillion to share costs he grabbed it with both hands. Besides, a new acquaintance by the name of Abdul Rasul Inamdari was bound to come in handy when asking directions to Ad-Diwaniya! Less convenient was the added weight - compounded by the need to carry an additional four gallons of fuel. No surprise then that the 400 miles to Baghdad took a full 24-hours, much of it spent pushing the overladen Flash through the loose desert sand.

Unsurprisingly, there was further need for maintenance in Baghdad while Murphy juggled the bureaucratic visa requirements for Jordan, Syria and Lebanon. That meant more sand ahead, and the need to negotiate 1000km of Syrian Desert - once an empty land populated only by marauding Arabs and now much the same; the vast distance between Baghdad and Damascus punctuated by a single small village.

With the Flash now boasting new tyres, a totally reconditioned frame (courtesy of the Baghdad blacksmiths), panel beaten guards plus re-welded pegs and levers, the adventurous pair set out for that very waypoint. Hampered consistently by dust storms, which completely obliterated the otherwise ill-defined route, it took three attempts to reach As-Sukhnah and a further day before they crossed the verdant hills of Lebanon to catch their first sight of the Mediterranean. 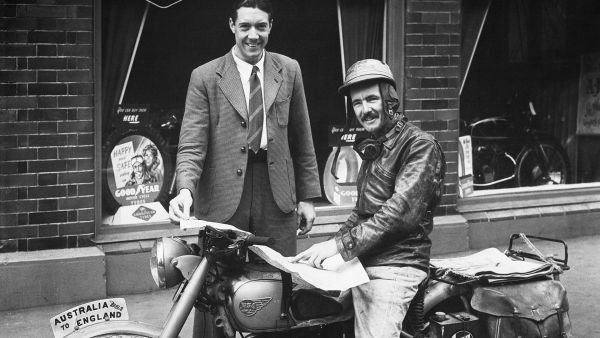 A publicity shot taken at the BSA dealership in London. Murphy’s odyssey was publicised as the first of its kind.

Now thoroughly enjoying his first taste of western civilisation and the hospitality of Abdul’s many acquaintances, it became all-too-easy to tarry. However, the month of May was rapidly coming to an end and Murphy was still determined to reach the Isle of Man in time for the TT. They pressed on through Ankara and soon enough they had taken the ferry across the Bosphorous and were officially in Europe. From this point Murphy’s notes become as frenetic as any packed tour itinerary: Edirine, Alexandropolis, Salonika, Belgrade, Trieste and Milan.

The Mont Cenis Pass and a race across France then followed. It was now cold - even at high-noon - but they were delighted not to sight another scorched palm or dark cypress, instead revelling at the sight of tended green pastures bisected by smooth bitumen roads. Even more delightful was the quay at Dunkirk from which they began the last of the three voyages that would break the continuity of road travel between Australia and the ‘Home Country’. This is not to mention the final sailing across the Irish Sea, of course, but first there would be some unforeseen opportunities presented to Murphy on arrival in England. 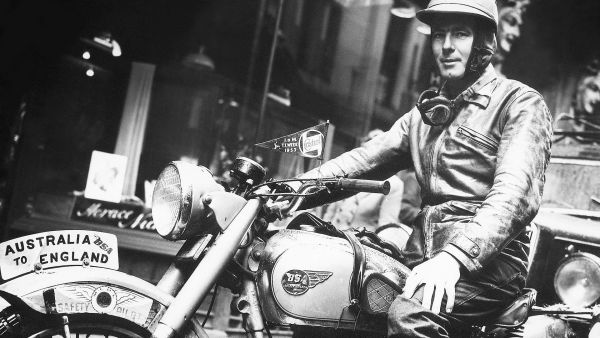 The flag points the way for Murphy, who would spend nine weeks travelling the 12,000 miles to see the TT for himself.

QUICK AS A FLASH

Despite their initial reticence, BSA had alerted ‘Motor Cycling’ magazine about Murphy’s adventures and he provided them with a vivid account of his 12,000 mile, nine-week odyssey in return for joining ‘Motor Cycling’s’ excursion to see that year’s TT. Then there were more publicity shots and the popular press to talk to. After all, Murphy was now widely acknowledged as the first man to ride home to the ‘Mother Country’ from the Colonies.

Fortune was favouring Murphy once more. Not only did he get to see the 1953 Isle of Man TT Races, but his epic adventure and new-found fame also brought him a fresh line of work as a motorcycle mechanic. With BSA, naturally.

We would like to thank Peter and Julie Murphy for sharing this fabulous story with the world, and Peter Whitaker for kindly allowing us to reproduce his words. This article was first published unabridged in Old Bike Australasia with the original title ‘Murphy’s Law’. If you’d like to discover more TT stories from ‘down under’, why not visit www.oldbikemag.com.au where you’ll find articles on Mike Hailwood, Tom Phillis, Kel Carruthers and more.

‘Dramatic’ is how Murphy describes the 1953 TT, noting in particular the fine performances of ‘Dominion’ riders such as Ken Kavanagh, Rod Coleman and Ken Mudford, who all finished well inside the top ten. But it was the Rhodesian rider, Ray Amm, who completed a prestigious Junior – Senior double victory for Norton; the works team having earlier lost star riders Geoff Duke and Reg Armstrong to Gilera over the winter months. 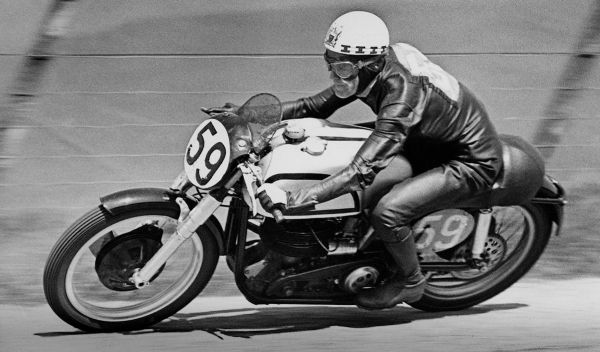 Ray Amm, pictured here on the works Norton, secured a memorable Junior-Senior double at the 1953 TT.

However, the 1953 TT is perhaps remembered first for the tragic loss of Les Graham, the winner of the inaugural 500cc Motorcycle Grand Prix World Championship. Graham lost control of his machine at what is now known as ‘Ago’s Leap’ on the second lap of the Senior and was killed instantly. Les had secured his first and only TT victory just a day earlier, winning the Ultra-Lightweight TT with a record-breaking performance.

Carlo Bandirola and the rest of the MV racing team subsequently withdrew from the Championship as a mark of respect and, two years later, the commemorative Graham Memorial was built on the slopes of Snaefell.