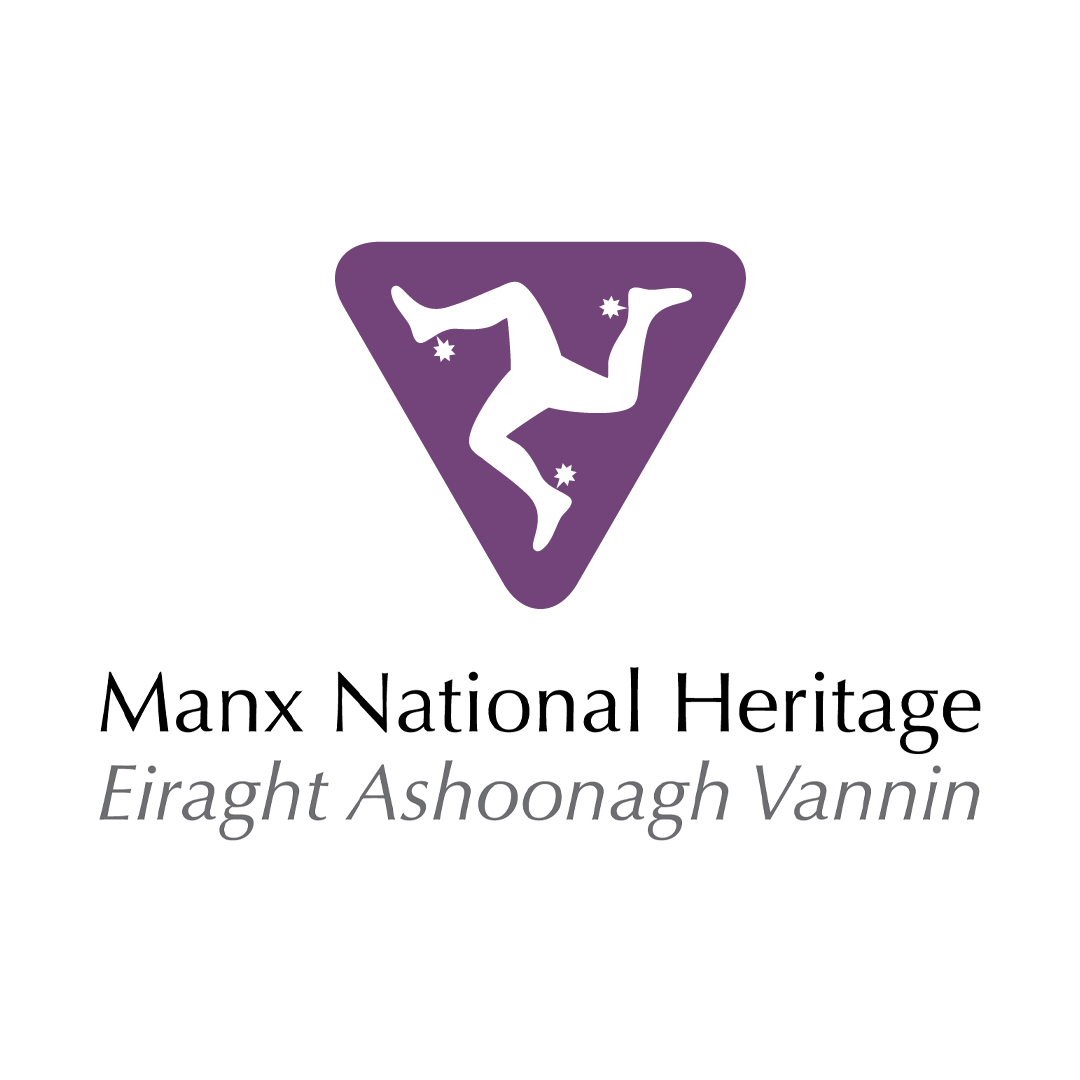 He had been the model of calm efficiency throughout the three-day competition. But immediately upon its conclusion – and likely giddy at his widely anticipated inclusion in the British team for the prestigious Gordon Bennett Cup of 1904 – Clifford Earp’s concentration slipped, with dramatic consequences.

Organisers of the Isle of Man’s first motorised event had taken pains to downplay the racing element. Selection, they intoned, would be made irrespective of speed and having taken into account aspects such as accuracy, reliability and teamwork. It was an unpopular decision. And few believed them.

It was to this end, however, that five laps of the 52-mile Highlands Course had been covered at a set schedule, to preclude aggressive overtaking on the narrow, rough and steeply cambered roads of the Isle of Man. All measurement of speed and acceleration were cloaked within.

The competitors played along. Clifford Earp had smiled and waved throughout those measured 260 miles, but now the gloves were off and a pile-up seemed likely as four cars jostled in return from the second Flying Kilometre run along Douglas Promenade. Thankfully this was avoided. What happened was bad enough.

Earp delayed his braking until 300 yards from the barricade across the road. His left-rear wheel locked and refused to release, sending his Napier skidding across tramlines, whereupon it mounted a kerb and struck a stonewall beyond. The impact ejected driver and riding mechanic (Earp’s brother Arthur), wrecked the front axle and damaged the reinforced wooden chassis. Worse, a spectator was injured. Earp’s selection was suddenly cast in doubt. 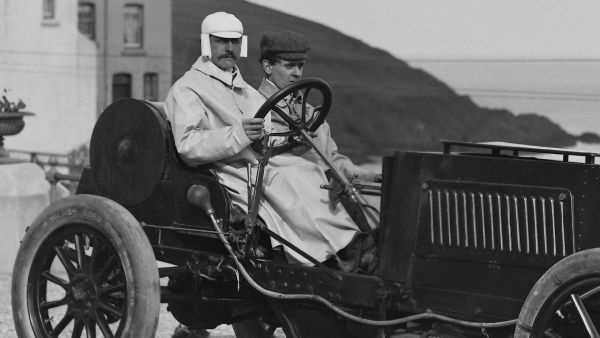 Would we have a TT today without Selwyn Frances Edge and his surprise win in the 1902 Gordon Bennett Cup?

Britain’s relationship with nascent motorsport was in flux. The bumptious man with the red warning flag was no more, but a 14mph speed limit – within months to be raised to 20mph – was strictly enforced and public roads were exactly that: not the preserve of the wealthy and their “slaughtering, stinking engines of iniquity.” Its hand, however, had been forced by Selwyn Frances Edge’s unexpected victory in the 1902 Gordon Bennett Cup, for it was customary for the successful nation to host the next edition.

Courses in Scotland (remote) and Lincolnshire (flat and empty) were mooted - as was a purpose-built facility near Putney. Attention then turned to a more enthusiastic region. With its surprisingly good road network (expensive rail was not king here) and an open mind to racing on public roads, Ireland came to the race’s rescue: the 1903 Gordon Bennett Cup would be held over a 92-mile figure-of-eight course 50 miles southwest of Dublin.

However, there was still considerable public concern about safety, particularly after the 1901 Paris Bordeaux Rally in which at least eight people had been killed. To allay these fears, the 1903 race would be held over closed-roads and marshalled by thousands of police officers, troops and club stewards issued with strict instructions to keep spectators off the roads and away from corners.

Even so, the Elimination Trial to complete selection for the British team had to be held on the Duke of Portland’s private estate in Nottinghamshire and, two days later (and illegally), over three ascents of Dashwood Hill in Buckinghamshire. Speeds and times were withheld from the press; only the gaps between competitors were reported. 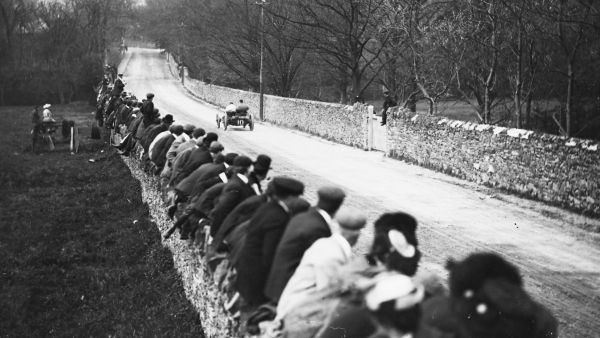 The start of a long love affair: The crowd at Quarterbridge get their very first taste of motorsport on the Isle of Man.

Edge – along with his hobbled Napier – was the only finisher in the Gordon Bennett Cup of 1902, but there would be no such luck this time around as the better-prepared German and French contingents easily upstaged the chosen British trio of Edge, John Stocks and Charles Jarrott – the latter retiring after a big crash caused by broken steering.

The Automobile Club of Great Britain and Ireland – forerunner to the RAC – was determined to do better in 1904. Preparation was clearly key and all encumbrances to that were to be circumvented. This was achieved swiftly and closer to home than Ireland thanks to the self-governing Isle of Man and Tynwald’s approval of the Highways (Light Locomotive) Act: three days’ grace that was the genesis of a continuing love affair.

Eleven cars assembled outside the Quarterbridge Hotel at 9am on Tuesday 10 May for the start: five Napiers, three Wolseleys, and three French Darracqs built under licence in Glasgow in order to qualify as being British. Released individually at minute intervals – their acceleration over the opening 200 yards being recorded – they headed south to the outskirts of Castletown before turning for Ballacraine via Foxdale and another measurement of speed, this time over three miles.

The route thereafter followed today’s TT Course before slotting left at Ballaugh Bridge and looping northwards via Sandygate and St Jude’s to the control zone in Ramsey. Designed to reduce speeds through built-up areas, there were five control zones in total; the cars’ performances from a standing start on the two-mile, twisting ascent from Ramsey’s Parliament Square eagerly noted by the gathering crowd. 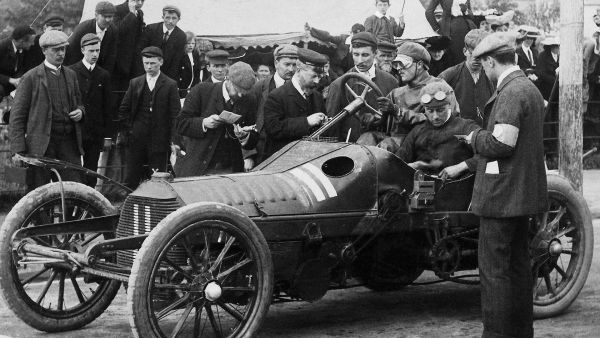 When you were supposed to stop on the TT Course! The Hon. Charles Rolls and his Wolseley is the source of some fascination for the gathering crowds in Ramsey.

The Wolseleys were slung rakishly low whereas the Darracqs looked bulky and cumbersome. Neither, however, could match the more-established Napiers, with their three-speed gearboxes and nominated outputs of up to 100 brake horsepower. Indeed, it was Napier’s trusted official test driver, Clifford Earp, who snatched victory in the five-lap race, with Stocks second and Edge third – the pre-event favourite recording the fastest lap at 1hr 21min to complete a 1-2-3 for the British marque.

Edge, who had set the fastest times through all the ‘timed’ sections – 73mph in one – also starred over the next two days, first at the Port e Vullen hill-climb near Ramsey, its half-mile course being tackled three times, and then in the speed trial on Douglas Promenade. His selection was assured, while Earp, second on both occasions despite problems with the metal-to-metal cone clutch, continued to impress.

The event, though tortuous, had been well run and without incident. But fierce controversy followed when Earp, battered and bruised, was denied what many believed to be his rightful place. Wolseley’s Charles Jarrott – very experienced but subdued and anxious in the aftermath of his big crash in 1903 – had got the nod instead, joining Edge and another Wolseley pilot, Sidney Girling, in the three-man team. 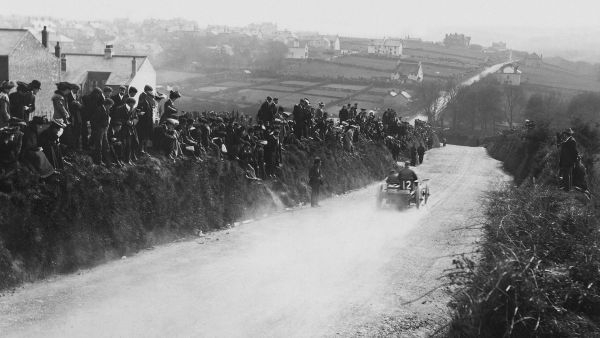 Motorsport fans have been gathering on Bray Hill for nearly 120 years, and the thrill is just the same today.

Though Edge completed the first 87-mile lap through the forested Taunus Mountains of Germany in third place, there was still to be no repeat of his 1902 victory. The British tried once more in 1905, its Elimination Trial again held on the Isle of Man, albeit this time using a simpler and more open format: on the footing of the first three men home after six laps of the Highlands Course. Earp salvaged his reputation with a victory for Napier in 7hr 48min, ahead of the Wolseleys of The Hon. Charles Rolls and Cecil Bianchi. Once again, however, disappointment beckoned.

With the previous winners still acting as host, the main race was held over four laps of an 85-mile course in the Auvergne. Even the French now baulked at city-to-city formats after the carnage of the 1901 Paris-Bordeaux Rally and, latterly, the 1903 Paris-Madrid race, which had been halted at Bordeaux following a string of fatalities. Earp started well, only to be delayed by a loose petrol tank and driver’s seat in finishing ninth, one place behind Rolls, and two ahead of Bianchi. France’s Leon Théry successfully defended his title with Richard-Brasier.

The Cup was once again in pioneering France’s domain. It was for very good reason that the stylish trophy featured winged goddess Victory, guided by Progress’s torch, astride the cockpit of a French Panhard. Commissioned from renowned jeweller, André Aucoc, the trophy was donated in 1900 by Paris-based American newspaper magnate James Gordon Bennett, who never did drive a car - despite a daredevil reputation. Furthermore, the motor race which took Bennett’s name was already on borrowed time.

The French were becoming restless. The Cup’s three-car limit did not sit well with its burgeoning industry and, as such, the inaugural Grand Prix of 1906 at Le Mans would be open to all-comers: nine of the 12 marques that contested that landmark race were French. The Gordon Bennett Cup had provided much-needed focus and necessary codification, but had had its day already. Of longer lasting import was what occurred the day after the British team’s Elimination Trial of 1905. 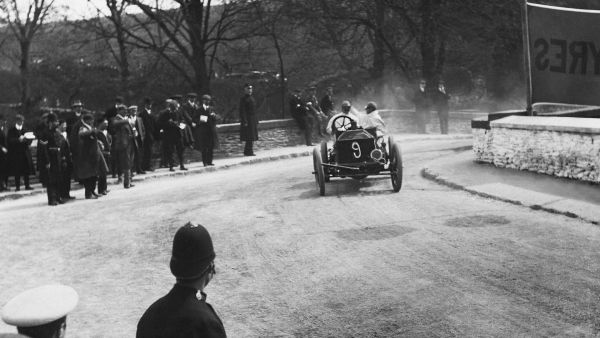 The two-wheeled answer to the Gordon Bennett Cup had been inaugurated in 1904, and its second iteration was again scheduled for late June, at Dourdan, southwest of Paris. The logic of assessing the British hopefuls over the same Manx course as the cars was undeniable. The reality, however, was less palatable.

The bikes, fewer in number, were second-class citizens, forced to compete on roads churned by the cars. So bad did that situation become, that the Mountain section was deemed impassable, causing the northern half to be lopped from the course, the motorcyclists instead turning right at Ballacraine and heading directly for Douglas.

Their start on Wednesday 31 May was delayed a half-hour because of mist – yet the first competitor of seven was still released at 3.30am! What crowd had gathered by this ungodly hour would soon disperse and dwindle: the cars, it was generally decided, had provided greater excitement and spectacle.

JS Campbell’s Ariel won the day in 4hr 09min 36sec, at an average approaching 30mph, and would be joined in the team by Harry Collier (Matchless) and Charles Franklin (Chater-Lea), the latter having dominated until sidelined by a broken conrod on the fifth and final lap. Representatives of Austria and France would beat them soundly in the main race. 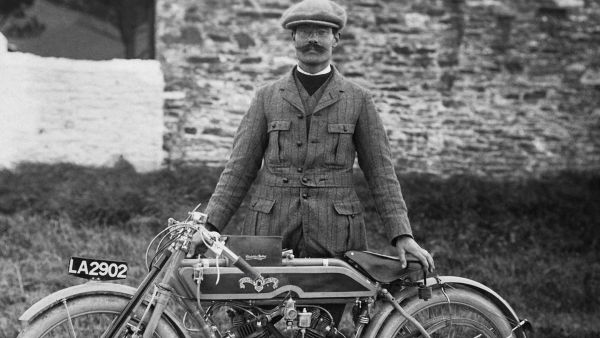 Motorcycling pioneer Harry Collier would eventually have his day, winning the Senior TT within four years of his Isle of Man debut.

British motorcyclists would be beaten to the Tourist Trophy punch, too. The Act of Parliament renewed for 1905 had allowed for six rather than three days of competition, an increase that provided for a race over the Highlands Course for touring rather than racing cars on Thursday 14 September.

The two-wheeled fraternity would have to wait two more years before receiving such recognition, and a further four before tackling the keynote Mountain Course. Their patience and doggedness, as well as competitive spirit, has been rewarded and reciprocated amply in the 110 years since. They could not know it in 1905, but motorbikes had found their spiritual home.