I LOVE YOU, MANN

TT fans are like no other. Fiercely proud and deeply loyal, they often turn their first visit to the famous races into a lifetime of annual pilgrimage. TT fans also like to meet other TT fans. We love nothing more than to share our TT stories and our personal knowledge of a unique event gained through years of unquestionable dedication and invested emotion. Most of all, we are bound by our mutual love of a spectacularly dangerous sport and our continuing admiration for those who display such skill and bravery in pursuit of glory.

But aren’t we missing something? Isn’t part of the pull simply being on the Isle of Man? For most fans, separating either the island or the Mountain Course from the TT is unthinkable. The Isle of Man and the TT is a union made in Heaven and, whilst any visit to the island and its world-famous race asks for a degree of effort and commitment, it always rewards in wondrous and surprising ways – even if that includes the odd regrettable tattoo!

“I was born and raised within minutes of Heysham docks. I’m nearly 50-years-old and I still live only 15 minutes from the docks and the [Isle of Man Steam Packet Company] ferry. I absolutely love the Isle of Man, I always have. My first trip to the island was in 1982 when I was just ten years old. My dad ran a bike garage at the time and, like in most bike shops, the TT would constantly pop up in conversation. Unlike most bike shops, however, we could pop the kettle on in the workshop and be on the ferry to Douglas by the time it had boiled.” 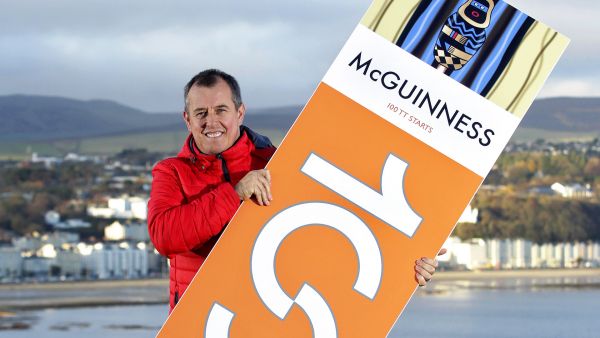 WHO KNOWS WHERE INSPIRATION WILL LEAD?

John’s dad was a regular visitor to the Isle of Man, often participating in the races held on the short road circuit near Jurby. With these races also taking place during the TT fortnight, the younger McGuinness had plenty of opportunity to watch masses of top road racing action. Sitting in the Manx countryside, staring at it all in wonder, John would ask himself, what if? It was a question he took back home.

“When my first trip to the Isle of Man came to an end, I stood on the ferry and cried my eyes out all the way home. I felt like I’d found my perfect playground, but had been dragged away before I had a chance to have a go on everything. At ten-years-old, I knew one day I’d be a TT racer.”

Imagine being ten years old, freely exploring the streets of Douglas on your BMX when you hear a race bike burbling up the road. It’s not a race day, so you stop pedalling and look up the road to see what’s going on. Cruising along in a line of Escorts, Cavaliers and ageing Transit Vans, is Joey Dunlop aboard his factory Honda RVF750. It’s not just the bike, or the out-of-this-world noise, either. It’s the Rothmans jacket. It’s the distinctive yellow helmet. If Joey Dunlop wasn’t already John’s hero, in the time it took to lean his race bike against the wall of a paper shop and nip in for a packet of smokes, he became a god to a wide-eyed and slack-jawed youth. 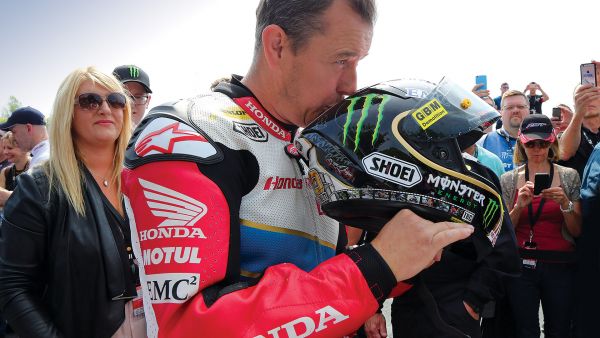 ALWAYS BEHIND YOU: BECKY AND EWAN SEE JOHN TO THE TT STARTLINE

If you’re a TT fan – and let’s presume you are – you’ll already have a reasonable idea of how that teenager turned inspiration into domination. And what was the catalyst, if it wasn’t that early immersion in the TT and those joyful days on the Isle of Man each summer?

Still, if genius is a mix of inspiration, talent and perspiration, McGuinness was lucky enough to have the talent, which he would hone and unleash each June. John also got lucky when it came to sharing his love of the island. Becky McGuinness first visited the Isle of Man with her future husband in 1990, when she and John were still teenagers. The day after John passed his full power test, they packed up his Kawasaki KR1S and rolled onto the ferry together, Becky expecting to find something truly magical out in the Irish Sea.

“John had built the place up so much that I was expecting to find Heaven over the horizon! If I close my eyes now and think back, it was wet, windy and freezing cold. We slept on the rock-hard ground in a tent that leaked like a sieve, and we had next to no money. We also went flat-out everywhere! But I still fell in love with the place.”

“There are some beautiful spots that we’ve found over the years. We can go to them as a family and enjoy some time together away from the paddock. It might sound strange, but we really like the museums and there’s plenty to choose from. We especially like going to the Grove Museum in Ramsey before taking a walk along the beach with a bag of chips or an ice cream.” 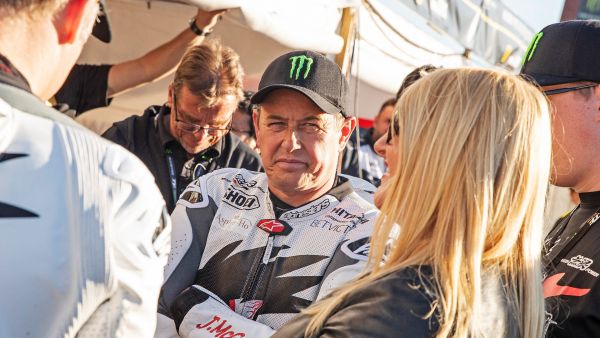 Secluded sand dunes, fairytale castles, treasure-trove museums and secret picnic spots help turn the race meeting into a family holiday. For the McGuinness clan, (John, Becky, son Ewan and daughter Maisie) the days and weeks spent in the Isle of Man are time spent the best way. Clearly they all love the place, so has John not considered relocating to the home of the TT?

“A few years ago, I said that half of me is ready to go and live on the Isle of Man. I think half of Becky would go too. The thing that’s held us back is that we’ve always lived in Morecambe. We love it here too, and we have a house big enough for me to keep a few more of my ‘toys’ in now. We’re only ever three or four hours away by ferry, but that little bit of distance keeps the romance of the Isle of Man alive for us.”

Becky agrees and admits that half of her would go too, but she also admits that a ‘half’ may one day become a ‘whole’, accepting the fact that her feelings may one day change as their circumstances do.

“We still talk about it – whether we would move to the Isle of Man. We’ve toyed before with the idea of buying a pub or some other business on the island, but I don’t think we could properly consider it until John’s ready to stop racing. Who knows when that’ll be?” 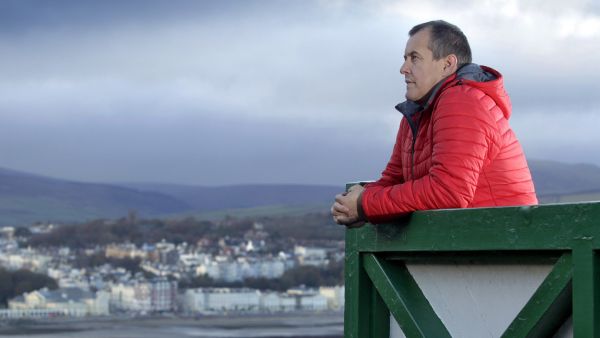 I LOVE YOU, MANN

For now, Becky is only counting down the days to TT 2022, while John is simply glad to be able to visit once more. Flying into Ronaldsway Airport in mid-November may not be everyone’s first choice trip, but when he did, the TT legend felt the same familiar feelings of an island tugging at his heart.

“Lockdown meant the longest break from the Isle of Man I’ve had in 40 years. I travelled over a couple of weeks ago and was so excited to be back. I ended up having to fly, rather than get the ferry like I usually do, but I still got the same-old heart flutters when I spotted the TT Grandstand on the approach to the airport. Even now, after all these years and tens of thousands of miles around the place, I still get giddy the first time I see it. Racing aside, the people are just so friendly, always smiling and up for a chat. It’s impossible not to love being there.”

Whether he loved TT 2019 as much, is doubtful. Parked up at the Bungalow with an engine bolt hanging out the side of the Norton was grounds for divorce. For a while it looked like the dream was over. Not so. For 2022 John will return to his favourite race with the factory Honda team. Celebrating his 100th TT start by racing a Fireblade on the island he loves feels like another marriage made in Heaven. Some may call it madness; others may call it love. Who knows if John and Becky will ever call the Isle of Man ‘home’?

With thanks to John Hogan