Over the past two decades, Australian road racers have made a major mark on Mountain course racing competition. Cameron Donald, David Johnson and Josh Brookes have notched up a succession of victories and podium finishes at the TT and Classic TT since 2008. Their success has built on a long history of Aussie riders with Barry Smith, Kel Carruthers, Jack Findlay, Tom Phillis and Jack Ahearn all excelling at the world’s greatest road race.

But it’s worth opening out this story a little bit further, because the friendly rivalry that exists between Australia and New Zealand is annually set aside, with fans from both nations travelling the globe to support their favourite TT competitors from the roadside. It is here, then, that we can add in the flying Kiwis: Graeme Crosby and Rob Holden – as well as Bruce Anstey, who has arguably led the New Zealand challenge by claiming 13 TT wins.

Little wonder then, that bike fans from the other side of the globe shrug off the challenge of a 20,000-mile round trip to visit ‘Mona’s Isle’, where they can soak up the unique atmosphere and watch their heroes in action. Making life much easier for those fans, however, is specialist sports travel company, Sportsnet Holidays. 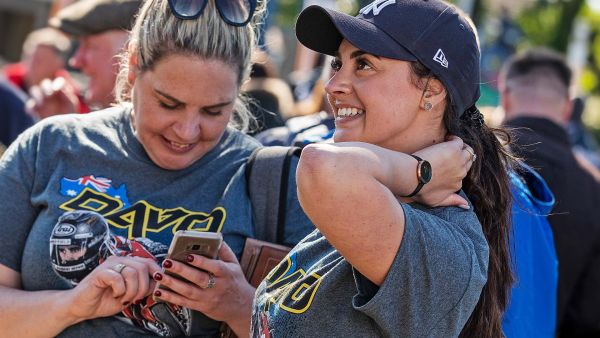 Soaking in the entire TT experience is Sportsnet’s modus-operandi!

Sportsnet has seen the number of TT fans making the trip with the company increase from just six in 2010 to almost 400 today. But what’s behind this friendliest of invasions? The Isle of Man is hardly the easiest of places to get to from ‘Down Under’, and making all the necessary travel connections complicates things further. Offering fully-escorted and ‘go-it-alone’ packages, Sportsnet - which has been operating for 23 years - has ironed out many of the wrinkles for travelling fans, as chief operating officer, Daniel Cecconi explains:

“Demand can often outweigh supply in getting to the Isle of Man. We solve this issue and make it super easy for fans by taking care of their international flights and using charters to fly in-and-out of the Isle of Man. We offer a fully-escorted tour which takes in the final qualifying session and all four race days. It’s perfect for the TT lover who has the time and wants to experience the event with everything taken care of from start to finish. In 2017, we also introduced a five night fully-escorted tour for fans with more limited time, but still want all the benefits an escorted tour provides.”

Simplifying the logistics of attending the TT is key for the event’s international fan base, but organising access to numerous events and viewpoints around the Isle of Man requires considerable planning. It is a challenge Sportsnet feel they have cracked, but it is, perhaps, the added value that Sportsnet provide, that has helped them connect so many fans from their part of the world with the famous races.

Helping do just that, are Aussie aces Cameron Donald and David Johnson, who are enthusiastically onboard as Sportsnet’s ‘TT ambassadors’, as Daniel explains:

“Both Cam and Davo give up a lot of their time to spend with the fans, which is priceless. We don’t just work with Australian riders though - John McGuinness has helped us out every year and the fans just love him. Ian Hutchinson, James Hillier, Bruce Anstey and the Birchall brothers have also been hugely popular guests of ours.”

Meeting your heroes is always a bonus, but having put so much effort into getting to the TT, those visitors from ‘Down Under’ soak up every aspect of the festival, displaying a huge appetite for all the history and culture found throughout the motorcycling mecca that is the Isle of Man. Outings take in Peel Day and the Ramsey Sprint – as well as the main sites of the island in an itinerary that often includes a trip up Snaefell Mountain to visit the Joey Dunlop statue. 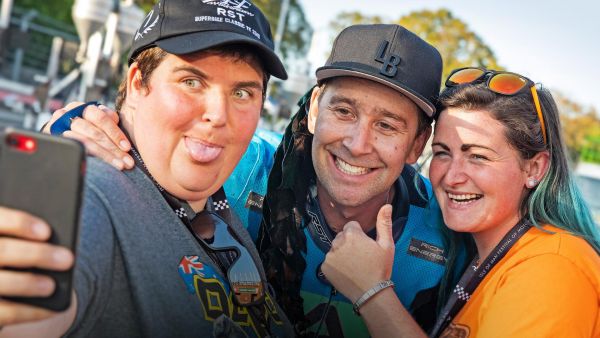 Sportsnet delight in connecting TT fans with their heroes.

Indeed, for the rest of us, the influx of Aussie and Kiwi fans has become more noticeable, with a seemingly endless supply of ‘Davo’ T-shirts flooding the TT paddock – another sign that neither Sportsnet, or their customers, are here to sit in hospitality. For them, the magic of the TT lies in its competitors and the sheer spectacle - as well as the island and its people.

“Our travelling fans are keen to learn anything they can about the TT – and especially love hearing stories from riders about racing in the past.” Daniel says. “All the museums - with all their motorcycles and memorabilia - are high on the agenda of places to visit.”

It’s a love affair that shows no signs of slowing down, and Sportsnet is confident the enforced break in the action will only increase the hunger for travelling to the TT as international borders re-open. Daniel and his friendly team, however, are already looking further ahead. Connecting fans with the world’s greatest road race is what drives the team from ‘Down Under’ and they believe the TT is about to become ‘bigger and better than ever’.