V IS FOR VICTORY CAFE

The road to fulfilling a lifelong dream is never a smooth one. Vicky and Benn Quirk, the owners of Victory Cafe, can certainly attest to that.

As one of the brains behind Betty’s Pie Co. and Manx Cider Company, Vicky - who has previously served from the TT paddock - may be familiar to those of you who have made your own pit-stops in search of something both filling and delicious. But Vicky had grander designs. In fact, she and Benn knew there was only one location for their businesses: the Bungalow at the 31st milestone.

Unused since it was Murray’s Motorcycle Museum, the building - in its iconic setting - appeared to be the dream location. However, despite lying empty for 17 years, it wasn’t quick or easy to move in. Designed as a Ministry of Defence radar station during the Cold War, the building’s architecture reflects its history: a simple no-nonsense, flat-roofed construction with separate areas for teams of male and female lodgers. As such, the building is deceptively large.

It took a lot of planning, chaser emails, a solid 60-page business plan and two years of headaches to finally secure the lease for the building. There then followed a significant amount of work to repair the derelict building. Indeed, when Vicky and Benn started working on the project, there was no electricity or running water - ­unless you count the water that was leaking through the roof.

With blood, sweat and tears, Victory Café was finally in a state fit to welcome its first customers – albeit only temporary. Open throughout TT fortnight in 2019, the pop-up pie shop was a huge success, with fans from all corners of the globe dropping by to have a taste of Vicky’s famous pies. Then, with the pop-up finished, the Victory team closed the doors once more and cracked on with the refurbishment - aiming to open again by Easter 2020. 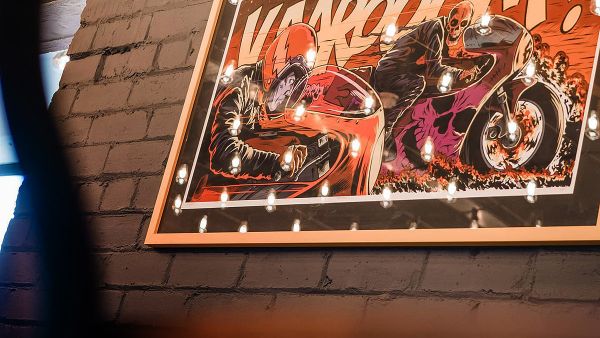 There’s lots to make you smile at Victory Café, and motorcycling culture can be found in every nook and cranny.

If it’s hard being an established business during a pandemic, it’s perhaps harder still to launch one. Tradesmen had to stop any progress, and with non-essential journeys across the island banned, Vicky and Benn couldn’t even access the building to progress things themselves. When lockdown was eased, the Victory team only found further delays as tradesmen were faced with unprecedented demand across the island.

Despite the obstacles the team faced, the cafe finally opened officially in May 2021. The building looks incredible since its makeover: the dark walls and new windows frame the beautiful Isle of Man scenery. The main room is not only an attractive cafe, but will also serve as a spot for all kinds of motorcycling-themed events. The shop, meanwhile, has all kinds of goodies for bike enthusiasts, including Victory Cafe’s own merchandise – as well as other brands you won’t find elsewhere on the island.

Even more exciting is the cinema room, which is ready to be used for exclusive screenings. This space is truly unique: instead of typical cinema seats, the room is decked out with moss green airline seats rescued from a defunct Japanese airline. Not only are these chairs visually striking, they also have all the original features you’d expect from an aeroplane seat: use your tray for some snacks, pop your feet up with the recliner or even pull your seatbelt over you if you’re so inclined.

The most innovative space, however, is the workshop - a learning environment equipped for tutorials on everything from painting, to mechanics, to first aid. It reflects the way in which Vicky and Benn are creating a new social hub for the local community, whilst the love, care and attention that has gone into restoring the building is evident in every corner. 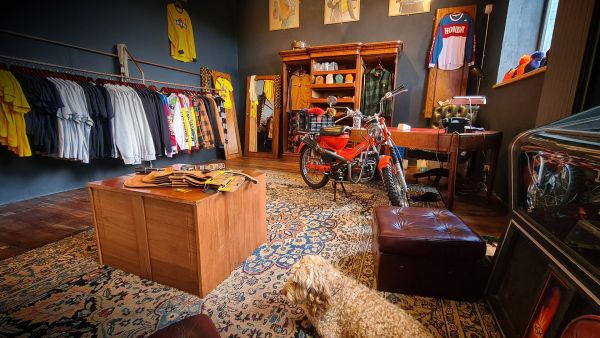 Victory Café even has a shop, which is full of all sorts of surprising goodies for bikers!

Whether you’re travelling to the Isle of Man for TT 2022, or you need a dose of island life sooner than that, Victory Café ought to be on everyone’s list of things to do. Overlooking the world-famous TT Course and accessible by Mountain Railway, there are few excuses not to seek out this labour of love. Meanwhile, Victory Café is set to transform race days up on Snaefell, with the (more) intrepid TT fan being rewarded not only with a unique spectating experience, but some Manx hospitality at its best.