Our in-depth look at the Greatest TT Teams of the Modern Era looks to Hawk Racing who, despite a relatively short history at the TT Races, have gotten used to standing on the top step.

Hawk Racing have been a mainstay in the British Championship paddock for more than twenty years and whilst they’ve only contested the TT for a fraction of that time, they’ve made a more than favourable impression.

The team was established in 1996 by Team Principal Stuart Hicken. He had been a successful racer himself in the 1960s and 70s, making six appearances around the TT Mountain Course in the Manx Grand Prix, before retiring from racing. Having earned a reputation as a respected bike builder, his mechanical skills were in high demand and Hicken subsequently ran the WP Suspension support team in the British Championship and at Grand Prix level for almost a decade. From there he moved into team management, looking after the Medd Racing and Reve Racing teams in the mid-1990s. In more recent years, Stuart’s son Steve has joined the outfit and become an integral part of the team’s success.

Hawk Racing made their TT debut in 2006. By this point, they were front-runners in the British Superbike Championship but opted to make a low-key first appearance at the TT Races by fielding established privateer Carl Rennie rather than one of the bigger names in the paddock. Having raced at the TT since the mid-1990s, the Lancastrian had recorded some solid results and lap times in previous years and his efforts were deservedly rewarded with a ride in a high-profile team. 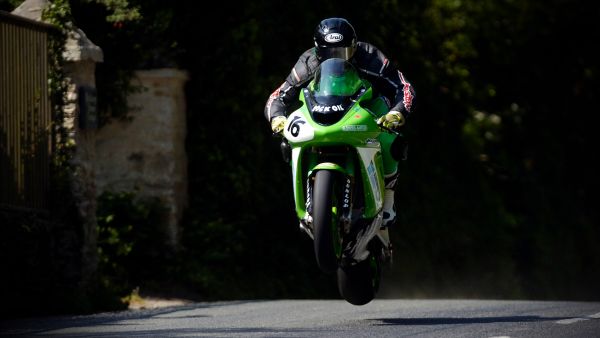 2006: Hawk Racing's first appearance at the TT Races, with Carl Rennie onboard

Rennie had previously recorded a best lap at an average speed of 120.20mph during TT 2005 but shattered that personal best with a lap of 124.036mph on the way to seventh place in the opening Superbike Race of TT 2006.

Further strong performances came in the Superstock and Supersport Races but Rennie and the Hawk Racing team saved their best performance until last, when he upped his personal best lap speed to 124.867mph and recorded an impressive seventh place finish with only John McGuinness, Cameron Donald, Bruce Anstey, Ian Lougher and Guy Martin ahead of him on the results sheet.

The deal between rider and team was renewed for the TT’s Centenary year but Rennie was forced to withdraw after fracturing a collarbone at the Cookstown 100, just a few weeks before the first practice for TT 2007. With no time to find a replacement rider, Hawk Racing were also absent from the event.

It would be seven years before they returned to the Isle of Man TT Races and, in the interim, the team had made the switch to BMW machinery.

When they returned at TT 2014, it was as a full factory-supported effort as the German manufacturer targeted TT glory on the 75th anniversary of their first TT win. BMW UK were able to entice Michael Dunlop away from the Honda Racing team to complete a dream team that hoped to end Honda’s dominant run at the TT Races. 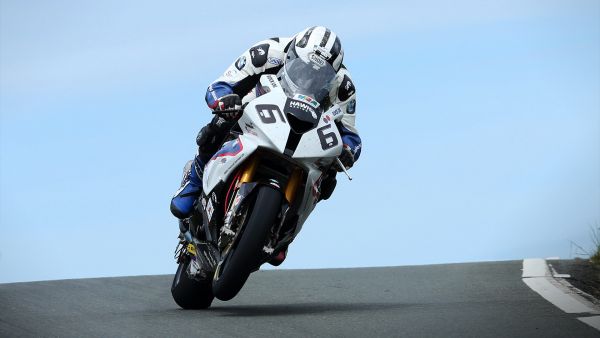 2014: 7 years after their last appearance, Hawk Racing and Michael Dunlop showed what the BMW S1000RR could do around the TT Course

The bike arrived on the Island with a reported 225bhp from its factory WSB engine but although the S1000RR was cleaning up on the short circuits, it had still to crack the TT podium. Shod with Metzeler tyres, the bike was a handful at the beginning of qualifying week and by Thursday it had been fitted with Dunlops with the team dialling the bike in further ahead of the opening Superbike Race.

Dunlop was only interested in winning and with a new lap record from a standing start, he stormed into the lead of the 6-lap race. He bettered that new record on lap two to put himself firmly in command. His early pace saw him catch nearest rival Guy Martin on the road and he gave BMW the win they yearned for, with an eventual winning margin of 20.6 seconds.

Further changes were made ahead of the Senior Race but it seemed they hadn’t worked as Dunlop was back in seventh at Glen Helen – but by the end of the lap, he’d overhauled all six riders ahead of him to grab the lead. However, he lost his rhythm at half race distance after brother William crashed at the Les Graham Memorial and it took all of his renowned resolve to bring the bike home. He duly did though to complete a dream TT for himself, BMW and Hawk Racing.

Despite the record-breaking successes of 2014, the Hawk-Dunlop partnership wasn’t renewed for 2015 with Dunlop instead signing for the Milwaukee Yamaha team to ride the new R1 Superbike. However, TT 2015 got off to torrid start for Dunlop and in one of the most sensational announcements in recent TT history, the Northern Irishman quit the team during qualifying week. A phone call was made to the Hicken family and a BMW was rapidly prepared and shipped to the Island. 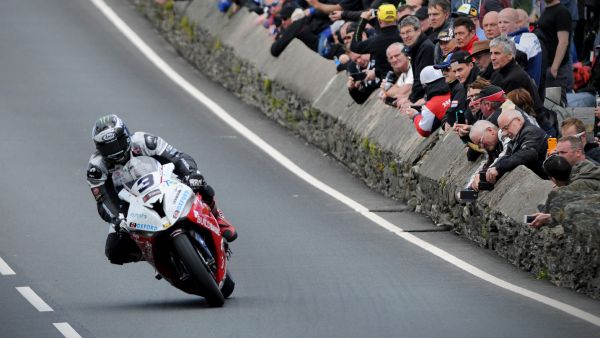 2015: Dunlop sensationally split from the Milwaukee Yamaha team part way through qualifying week. The Hawk Racing team stepped in at the 11th hour to provide him with BMW machinery, but a lack of practice and a crash in the Superbike Race severely affected his hopes for glory

Understandably, they couldn’t replicate the success of the previous year - not aided by a crash for Dunlop at the Nook in the Superbike Race - but a solid fifth place was taken in the Senior when Dunlop posted, at the time, the second quickest lap ever.

Keen to make amends and also not make any mistakes in 2016, Dunlop publicly declared his intentions to continue working with Hawk Racing and the deal was soon agreed - one which neither party looked back from.

Dunlop had further motivation to succeed due to his intense rivalry that year with a similarly-mounted Ian Hutchinson in the Tyco BMW team. He would go on to romp to a Superbike and Senior double on the Hawk Racing-prepared BMW S1000RR, becoming the first rider to lap at more than 133mph and under 17 minutes in the process. 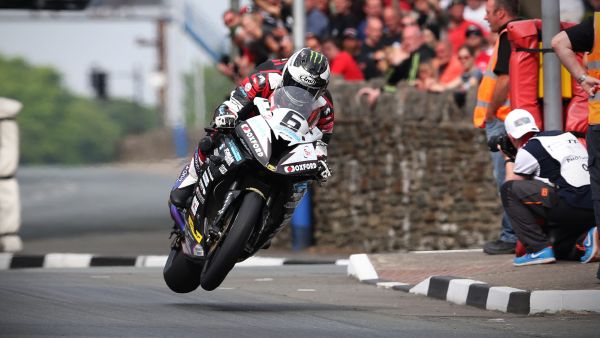 2016: Dunlop was back to his best and proved unbeatable in the 'big bike' classes, taking a Superbike and Senior TT double

For 2017, Hawk Racing announced they would be switching to Suzuki power for their BSB campaign, running the all-new GSX-R1000R. Having been bitten by his Yamaha experience, Dunlop was wary of trying to win TT races on an unproven bike but, eventually, he accepted the challenge.

At the North West 200 prior to the the TT, the bike wasn’t as competitive as either Dunlop or the Hickens would have liked. The midnight oil was burned in the run up to the TT and the bike further refined during qualifying. Miraculously, Dunlop led the opening Superbike Race of TT 2017 by the end of the opening lap but disaster struck soon after and he was forced to retire mid-way round his second lap. With the Superstock-spec Suzuki some way off the pace of the BMWs and Hondas, the Senior Race was their last chance for glory.

Drastic suspension changes were made ahead of the blue-riband race but they didn’t appear to work and Dunlop was off the pace. Just over one second split Smiths Racing’s Peter Hickman, Tyco BMW’s Ian Hutchinson and Silicone Engineering’s Dean Harrison in a three-way battle for the lead while Dunlop was some 10 seconds down.

However, in a dramatic twist, Hutchinson crashed soon after the 27th Milestone in an incident which brought out the red flag. The team were able to fit a new shock absorber ahead of the restarted, four-lap race and Dunlop grabbed the lead from the start. Setting the fastest lap of that year’s TT at 132.903mph, he triumphed over Hickman by 13.3 seconds to take his 15th TT win - Hawk’s 5th victory - with an unproven Suzuki package. 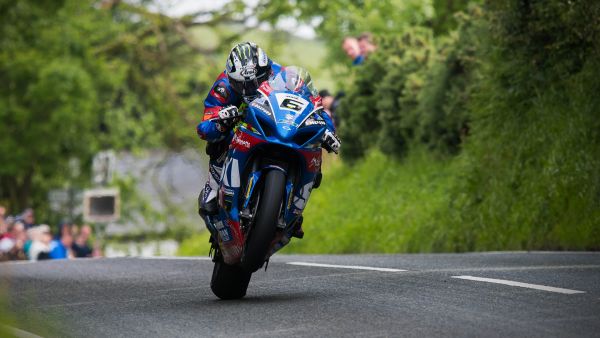 2017: Senior TT victory on an unproven bike is surely a highlight of both Dunlop and Hawk Racing's TT careers

Dunlop made the switch to the Tyco BMW team for 2018 and the Hawk Racing team opted to miss that year’s TT. The team returned in smaller capacity for 2019, preparing a bike for promising Kiwi newcomer Jay Lawrence who - despite a fortnight heavily disrupted by weather - took three strong finishes in the Superbike, Superstock and Senior TT Races, posting a best lap at a highly impressive sped of 125.034mph.