It was the place of childhood dreams. A place of freedom and adventure for two weeks every summer and even as a youngster, Dominic Herbertson knew that this was the only place he felt genuinely happy. His dad - his hero - raced in the Manx Grand Prix, and the highlight of every year for the family was making the trip across the Irish Sea so Mark could contest his favourite race. And even though he felt more at home on the Isle of Man than he did in Northumberland, young Dom had little idea that the family focus would one day be on him.

In almost true, stereotypical road racing style, Dom hails from a working-class family from the north east of England. With two older sisters he was the youngest of three children whose whole life was built around a fortnight on the Isle of Man. ‘I took it for granted because I had no idea what it was - other than somewhere we went every year for a family holiday,’ he reveals.

‘It was a place you had the best two weeks every year. You’d be let out all day, nobody was telling you off, you could go and play at the skate park, run around the entire island if you wanted. It was like an awesome Butlins and it was all mine.

‘We knew we were there for my dad’s racing and the thing that still stands out was how happy he was. He’s so focused that it’s fair to say he looked grumpy the rest of the year. The only time as kids that we saw him truly happy was when he was racing his motorcycle around the Isle of Man.

‘Imagine coming back every night and your dad was all smiles - even if the engine was in a million bits and it was all going wrong. We just saw a happy man and that made us all happy. We all had two weeks of utter bliss and that was what the Isle of Man was to me … and it still is.’ 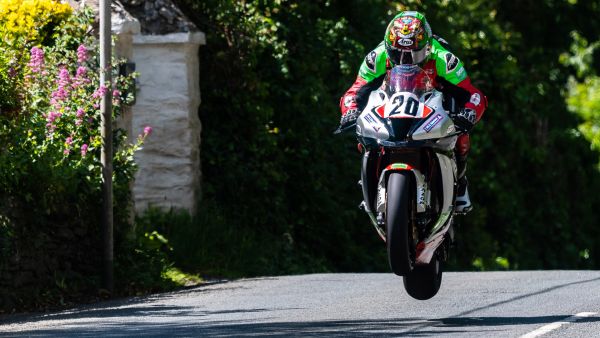 Dom’s love of motocross and his early foray into BMX is still evident!

Growing up as a paddock kid, it would be easy to presume Dom’s route to TT stardom was already pre-planned and laid out for him, with contacts made from an early age and opportunities easily passed his way. Yet that couldn’t be further from the truth, as Dom admits racing there was the last thing on his mind.

With his eyes on a motocross career, Dom threw himself into BMX, travelling the UK and Europe to compete, even appearing in magazines and photoshoots. His ambition was growing ever more realistic, but he knew it would take a job of his own to be able to afford to do it.

‘My dad hadn’t put me on a bike because he couldn’t afford to, so I left school at 16 and got a job. I still wanted that motocross bike, but my dad wasn’t impressed. Then I had the lightbulb moment: I would go road racing instead. And do you know why? It was because I wanted to impress my dad. That there is the honest truth.’ 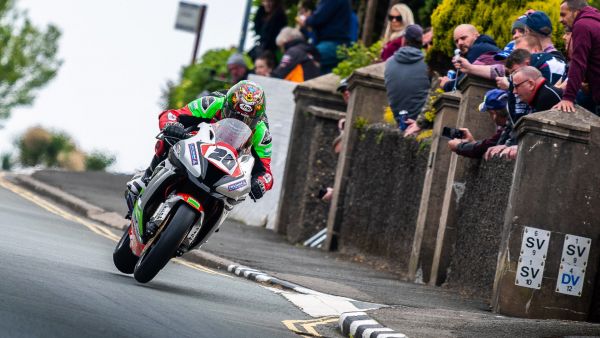 “I just wanted to go to the Isle of Man and race with my dad...”

It took a few more years before Dom was ready to start racing, however. Prioritising work, he first invested some of his earnings into gaining more qualifications. It wasn’t until he was 20 years-old that he bought his first bike, an SV650.

‘I just wanted to go to the Isle of Man and race with my dad, I had no idea about BSB or MotoGP or any of that,’ he recalls. ‘I did a few club races at circuits like Croft and Knockhill, but my first experience of road racing was going down Bray Hill at the Manx Grand Prix in 2013.

‘The newcomers were the last group out on track. I remember coming over the mountain as the stars were first appearing and as the sun crept behind the horizon. At that precise moment I thought, I need to do this for the rest of my life. That first real lap of the course was all it took.

‘I came back to the paddock convinced I was the world’s fastest man. Nobody had passed me and I got off the bike acting like I was the ‘cock o’ the walk’. I was thinking to myself, just engrave the trophy now, but the euphoria didn’t last long. When I received the time sheet, I found myself near the bottom with an average speed of 74mph!

‘My dad saw I was back and came rolling in to the awning. He grabbed the sheet out my hand, looked at the front, turned it over, scrolled down and just laughed at me and said, “Well, you’re never going to make a TT rider, are you?”

‘I was useless, absolutely useless. The truth is I am the least naturally-gifted person in the road racing paddock. Honest, I’m not even exaggerating. But do you know what? I’m the most stubborn.’ 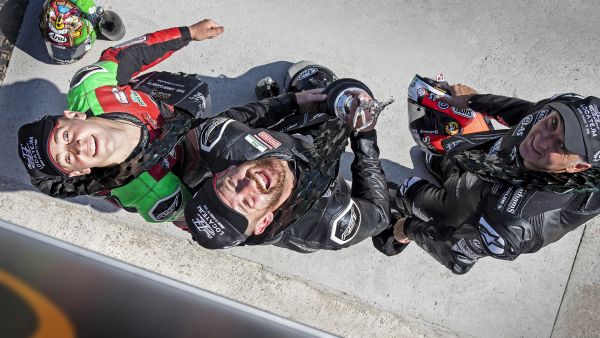 Dom’s self-proclaimed stubbornness fuelled his progress at the Manx and nine months later, Dom made his TT debut at his father’s suggestion. It was typical ‘seat of your pants’ stuff as Dom headed off down Bray Hill once again, this time on a road-going R6 he’d bought a few days before.

‘We kept the front end totally standard, put a Maxton shock in and off we went,’ recalls Dom. ‘But this thing was violent. It shook and shook and would not stay in a straight line. Because it was my first time on a Supersport, I thought that was just what they did. I’d been quicker on my Supertwin at the Manx! Now I wasn’t even going to qualify. It was a disaster.

‘Then, on the last day of qualifying, I went and spoke to James at IFM Moto and Rich at Maxton who recommended Metzeler tyres. It was the last session and, with nothing to lose, I threw them on. Honestly, the thing was so stable. I went from 105 to 118mph and qualified easily.

‘That was the turning point of the fortnight, but also the turning point for me as a rider. I felt there was some sort of higher power asking me if I was really ready for this? I was thinking yeah, I’m ready. A life of debt and bad decisions, let’s have it. I’m a TT rider now.’ 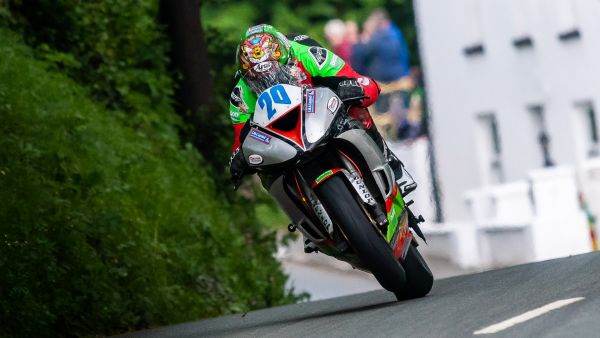 A seeded rider in 2019, Dom is aiming to make further inroads into the TT’s top twenty.

As a relatively unknown rider, Dom has been able to learn the Mountain Course and grow into the TT at his own pace with no outside pressure. For Dom, the goal each year is simply to improve on the previous. ‘The only thing I fear about going to the TT is failure,’ he says. ‘Failure for me is not progressing, and I think it’s the same for everyone.

‘What’s great about the TT is chasing the clock and trying to go faster. Look at the lad who’s been lapping at 124mph, for instance. If he goes out and does a 125mph lap, his is the happiest awning in the paddock that night. In 2019 I went with the same objective. My fastest up until then had been 127.9mph so I wanted to reach 128mph.’

However, 2019 wasn’t a kind TT for anyone. Practice week was dogged by bad weather and race week saw no action at all for three days straight. By the time the riders lined up for Friday’s Senior TT, many like Dom were over it.

‘I went into the race accepting that this was the year I may go backwards. The weather had been crap, it just hadn’t been a good fortnight. I took it on the chin and resigned myself to coming back and having another go in 2020. But I went out and recorded a lap of 129.8mph. It was way more than I’d expected and I just went nuts. I went absolutely nuts.

‘It was weeks later that it really sunk in and I realised how close I’d been to the magical 130. When I first started racing, I thought something like that was unachievable. I know that’s partly the evolution of the sport, but it was still incredible. Then you have the realisation you were oh-so close - it’s a bit like being one number away from a lottery win.’ 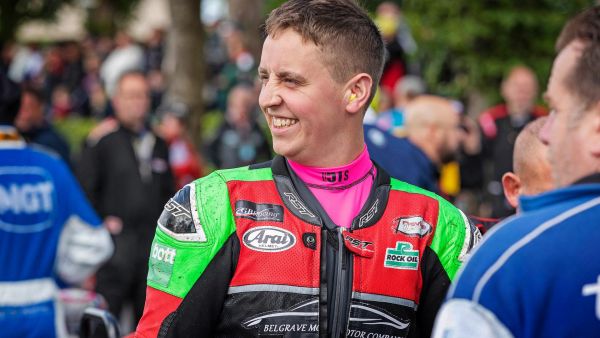 “People see me laughing all the time, but when it comes to racing, I’m as serious as the next person.”

Not only did he record a near 130mph lap, but Dom also scored a top 10 finish in that same Senior race - something he says has been the highlight of his career so far. However, like everyone else, he hasn’t yet had the chance to come back and build on that success. When he does, he knows that he needs to be in the best place possible - both mentally and physically.

‘I’ve worked really hard these past two years, getting as much time on the bike as I can. People see me blabbering on and laughing all the time, but when it comes to racing, I’m as serious as the next person. I think people are starting to notice that too. They can see I am very committed. That’s because I want to do better on the Isle of Man. Everything I do is about the TT.

‘I go with realistic goals and that won’t change. At the end of the day this is still about me and my family travelling to the Isle of Man. I wanted to make dad proud and I think I have. Now I’m just going to keep working hard and pushing forward. I want to do this forever, that dream hasn’t changed and it never will.’