THE STORY OF THE SENIOR

The Isle of Man Senior TT is not just steeped in history. It’s seeping in it.

When Peter Hickman crossed the line on Saturday 11th June to win the 2022 Milwaukee Senior TT Race he joined legends such as; Ray Amm, Mick Grant, Jimmy Guthrie, Tom Herron and Rob McElnea in winning this prestigious race for the second time in their careers. In future should he win it a third time then his name will appear alongside Harold Daniell, Geoff Duke, Dave Jefferies, Michael Dunlop and Phil McCallen as a three-time Senior winner. The most successful? Mike Hailwood and John McGuinness both on seven Senior wins closely followed by Giacomo Agostini who won on five occasions, and the list of four-time winners includes Joey Dunlop, Steve Hislop, John Surtees and Stanley Woods.

The Isle of Man TT Races began in 1907 with the first Senior race held in 1911, it’s regarded by many as the greatest motorcycle race in the world sitting alongside other iconic motorsport events such as the 24 Hours of Le Mans, the Indianapolis 500 and the Monaco Grand Prix. The difference being they are contested by four-wheeled race cars. From 1949 to 1976 the Senior TT was the British Motorcycle Grand Prix. Alongside Monaco, the Isle of Man is undoubtedly the best known road circuit. One lap of the Mountain course is over thirty-seven miles in length and in the Senior race this is completed six times at incredible speeds. It’s a real test of endurance. 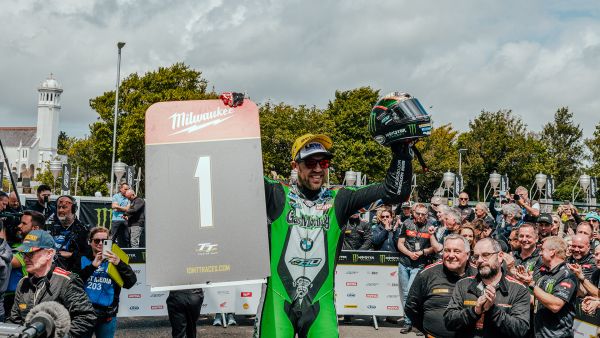 This year when the iconic Senior TT Race was pushed back 24-hours from its traditional Friday slot there loomed a question mark over whether the race would happen; not because of any issues with the weather but the availability of an integral part of the TT, the marshals. Many of those who had manned the course for the previous two weeks were booked to go home that day.

A call-out on social media not just from the organisers but the riders too, brought volunteers out in their droves. It wasn’t just the fans who were determined to make sure the Senior TT Race went ahead, as it appeared anyone with a connection to the racing community joined forces. Everyone from team personnel with no commitments during the race or even family members, like Glenn Irwin’s brothers Andrew and Graeme, signed on to don the orange bib to ensure the greatest race in the world would happen. It was former sidecar TT race winner John Holden that had led the way earlier in the week by becoming a marshal when he had to withdraw from the event during qualifying as he was unable to secure the services of a fit passenger. Reigning champions Ben and Tom Birchall had also suggested they were willing to sign up. 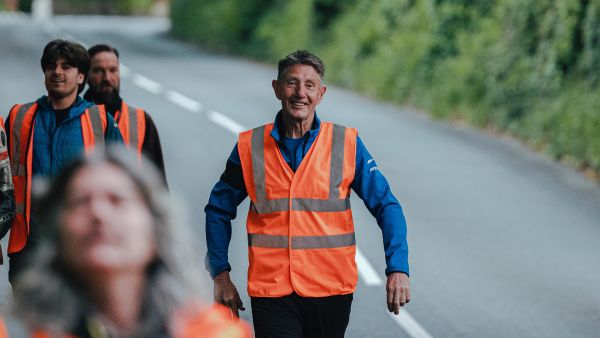 JOHN HOLDEN TOOK TO HIS MARSHALLING POST EARLY INTO TT 2022 WHEN HE PULLED OUT OF THE SIDECAR RACE.

Clerk of the Course Gary Thompson takes up the story. “With the weather against us on Friday we had no choice but to put the race back until the following day. At that moment in time, we were 50 marshals short of what we needed across all sectors to run the Senior TT Race. So, we put out the request and credit has to go to the Chair of the TTMA Jane Corlett and her board of directors for the efforts they put in enabling the event to run an extra day. We were inundated with applications and what was pleasing was the response, especially amongst the sidecar fraternity in answering the call. Not just anyone can marshal, there has to be a level of competency, therefore everyone who came to sign on had to complete two online modules and then take a test at the end of it. In fact, there were so many signing on that the system crashed and there was a period of time while we were offline until the IT experts got everything up and running again. By the end of it, we had an extra 284 marshals signed up in a four-hour period which meant that the only thing that could have stopped the Senior going ahead would be the weather. It was a marvellous response from the TT community.”

As for the race, history was made as it was the first Senior TT to be broadcast live with fans all around the world able to enjoy all six laps as they happened via the TT+ live stream. 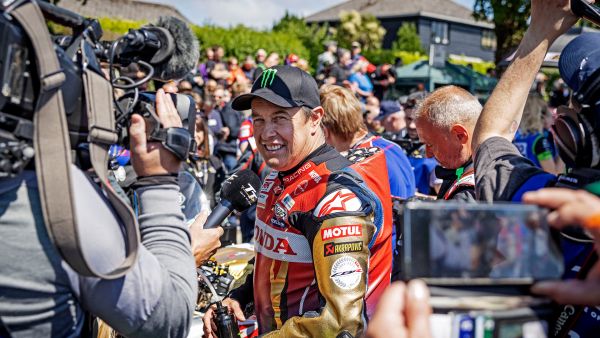 Peter Hickman would go on to power his way to victory yet not many knew he had issues throughout the race. “My brake pads kept rattling so every time I pulled the lever nothing was happening,” he admits. “Therefore, I had to pump them a couple of times before the brakes kicked in. The other issue I had was the bike was overheating a lot so I was managing that by short-shifting the gears to keep the revs down which meant I wasn’t on full throttle most of the time.” His victory in the Senior meant he’d now won 9 TT races

Having made his 100th race start earlier in the week, John McGuinness was first on the road eventually going on to finish ninth and while he made it to the chequered flag his Honda Racing team-mate Glenn Irwin, who was making his Isle of Man TT debut, was forced to call it a day at the end of lap 4. His consolation? Posting a lap of 129.849mph in the Superbike TT a week earlier which was quicker than the 23-time TT winner could manage throughout the fortnight. Whether this was the last appearance of McGuinness at the Isle of Man TT Races remains yet to be seen. 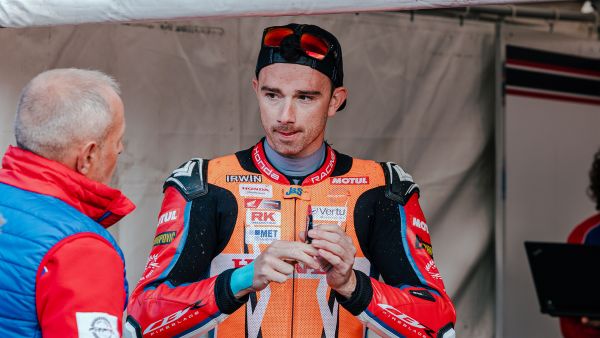 GLENN IRWIN TOOK THE RECORD FOR FASTEST NEWCOMER BUT UNFORTUNATELY RETIRED IN THE PITS ON HIS FOURTH LAP OF THE SENIOR.

2019 Reigning Senior TT champion, Dean Harrison, had to be content with second place this time while behind him there was a tremendous battle between the Milenco Padgett’s Pairing Conor Cummins and Davey Todd. The team-mates tossed third place between them like the proverbial hot potato and at one stage, incredibly there was less than half a second between them. 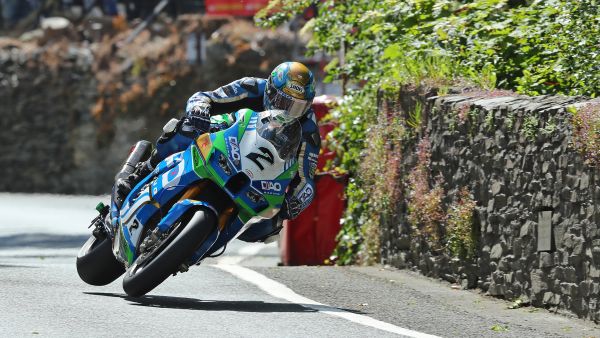 They couldn’t even be separated at the pit stops as Milenco Padgetts Honda Racing supremo Clive Padgett reveals. “In the first set of stops one of our riders was three tenths of a second faster than the over. In the second, the roles were reversed with the other three tenths quicker so thankfully the final rostrum position wasn’t decided by the actions of the crews filling the bikes with fuel and changing rear tyres. It’s also worth mentioning that one crew were very experienced having performed this role for 15 years while the other had never done this at the TT before.”

With the race drawing to a close and both of his riders arriving at each timing sector with just a handful of seconds between them, sometimes even less, it was clear in Clive’s mind he would first have to greet whichever one was going to miss out on a top three finish so decided to stay away from the winner's enclosure. 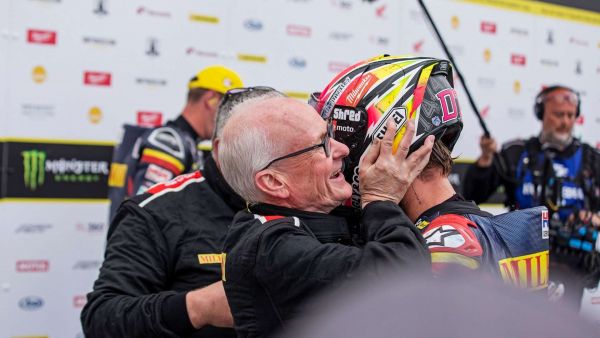 CLIVE PADGETT SHARES A MOMENT OF PURE EMOTION WITH DAVEY TODD AFTER HE BATTLED HEAD TO HEAD WITH TEAM MATE CUMMINS.

At the end of six laps it was Cummins who once again found himself standing on a Senior TT podium while Todd was reportedly bitterly disappointed in missing out by less than three seconds.”When Davey got off the bike,” say Clive, “I grabbed his head, looked him in the eye and said ‘bloody hell mate, well done that was a great ride ‘ because it was even though he so desperately wanted to stand on the podium at the TT”

Having consoled one rider it was then time to celebrate with the other with Hickman, Harrison and Cummins standing on a Senior rostrum together just as they had done in the previous two Senior TT races. 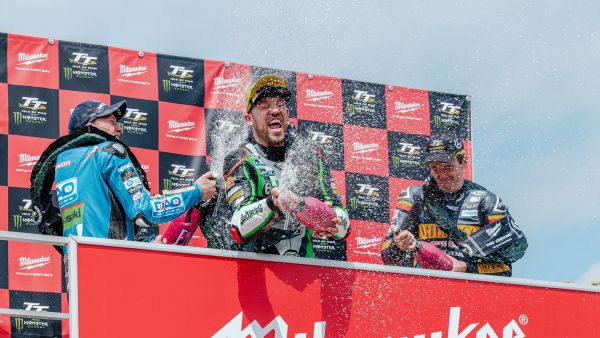 That brought the curtain down on TT22. There were no lap records this time but what was evident was that when the TT community had to come together, they did strongly and in numbers to not only make sure the racing took place but that the event can move firmly into 2023.