In 2019 Davey Todd had established himself as road racing’s hottest property. The former British Supermoto champion had won his first international road race at the North West 200 and lapped the TT course at over 131mph in just his second Mountain Course appearance. Still only 24, Todd was snapped up by Honda Racing for a British Superstock campaign as a factory rider, to prepare him for an assault on the international road racing scene. Then, Coronavirus arrived and his world was turned upside down…

The pandemic has disrupted everyone’s lives over the past year, but the impact on Davey Todd’s career has been particularly devastating. Initially Honda retained his services for the 2020 short-circuit series, but with the TT cancelled for a second year his contract wasn’t renewed in 2021.

Unbowed, the resourceful Saltburn-by-the-Sea rider has now joined the Wilson Craig Honda squad for selected 2021 events. His first outing with the team - now run by former Irish and Ulster champion, Darren Gilpin - was at the Oliver’s Mount Spring Cup in May.

“I’m taking it as it comes and trying to do as much as I can road racing-wise.” Todd said before demonstrating he has lost none of his pace by finishing runner-up in the feature race to reigning Senior TT champion and Oliver’s Mount specialist, Dean Harrison.

“I am still trying to get something sorted for the British championship.” he explained, indicating he has already turned down some offers he considered unsuitable. “It needs to be competitive which is why I am not back there yet.”

Still only 25, Todd has time on his side, but he has been left feeling frustrated by the developments of the last 12 months that will see him miss two years of his Mountain Course apprenticeship.

“It’s a massive blow to miss a second year” he admitted. “I’ve lost a lot financially with the team and sponsors, and having only done two TTs, two years away is a big gap. I’ll have to go back and take it step by step.”

Bitter as the blow is, it isn’t the first time in Todd’s racing career that he has faced a major crisis.

“At the start of 2017 I got screwed over by a team in British Superstock 600 Championship and was left with nothing. I’ve never been closer in my career to giving up on racing, but I guess those are the times that make you who you are.”

The young Yorkshireman bounced back, focusing the skills acquired on his journey from schoolboy motocross to Supermoto Champion into a new career as a road racer.

“After what happened I was trying anything I could to get back into racing. I went to the Isle of Man TT, but working for an insurance company! I promised I’d sell tons of insurance when I was there. I didn’t… but I fell in love with road racing. Just by chance I had contact with a guy in Northern Ireland called Harry Corbett, who offered me a ride at Skerries on a 600 and I have never looked back!”

Todd’s career development between the hedges has had a supercharged feel since that debut on the country roads north of Dublin. After making impressive maiden appearances at the other Irish National events and at his local race of Oliver’s Mount, Scarborough, the 22-year old grabbed the attention of team bosses on his Ulster Grand Prix debut. After finishing runner-up in the Dundrod 150 National Race that precedes the headline Ulster Grand Prix, Todd stunned the opposition by running in the top-six of the Supersport race and lapping at over 125mph before his bike gave up the ghost. 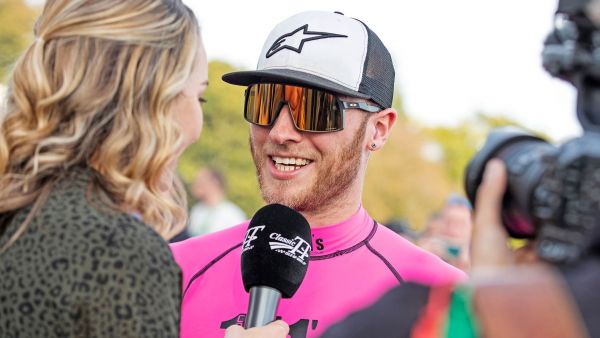 I’d never been closer in my career to giving up on racing, but I guess those are the times that make you who you are.

Alongside a full campaign of road racing in Ireland, the 22-year old Englishman made everyone sit up and pay attention during his Mountain Course debut in his second year on the roads. Lapping at an average speed of 128.379mph, Todd claimed a top-ten finish in the Senior Race, became second only to Peter Hickman in the list of fastest ever TT newcomers, and scooped the RST ‘Star of Tomorrow Award’.

A month later, Todd returned to the Isle of Man and became the fastest newcomer at the Southern 100, finishing third in the feature race. In August, a fantastic fourth-place finish in the Superstock race at the Ulster Grand Prix was followed by a timely reminder of the dangers involved in his new career, when Todd miraculously escaped uninjured from a huge crash at the terrifying Deer’s Leap during the Superbike event.

He made a guest appearance in the final round of the International Road Racing Championship at Frohburg, Germany with former TT racer, Rico Penskofer’s Penz BMW squad, which led to an appearance at the Macau Grand Prix and a full-time ride for the 2019 season. That year, Todd supplemented his Penz BMW ride with appearances on a Padgetts Honda in the Supersport class for the TT, North West 200 and Ulster Grand Prix, under the invaluable guidance of team boss, Clive Padgett.

It was in the 600cc class that the Yorkshireman claimed his first international victory at the North West 200. Podium finishes in the Superstock races at the North West and Ulster Grand Prix, plus overall victory in the International Road Racing Championship on the Penz BMWs framed a brilliant performance at the TT that marked 2019 as Todd’s breakthrough season.

In a fortnight dominated by poor weather, the 23-year old saved his best for last on the TT Mountain Course and lapped at 131.491mph to claim a sixth-place finish in the final Senior Race. A brilliant fourth-place result at Macau topped off an amazing season that also saw the young English rider stand on a TT podium for the first time, when he finished runner-up to Bruce Anstey in the Lightweight Classic TT.

The upward trajectory of Todd’s road racing career has been suspended by the effects of the COVID-19 pandemic, but he remains hopeful it’s only a temporary setback. As he tries to secure a British championship ride that will help retain the cutting edge to his race pace, more Scarborough and Irish road racing outings are planned on the red and silver Hondas of the Wilson Craig squad.

With a three-year break in TT racing by the time the action resumes in 2022, Todd feels Mountain Course experience will be a critical factor.

“It will be tough for everyone, but most of the other top TT guys have more experience than me and they will benefit from that. But I still do a lot of homework on the circuit and I won’t be getting too hung up or pushing anything.”

With the disappearance of the Honda contract for 2021, Todd says he has “plenty of interest, but nothing sorted yet” on machine offers for next season.

“I am focused on this year and will think about 2022 closer to the time. It’s been really frustrating, especially with the whole Honda thing. It has been a major financial blow as well but it isn’t just me who has suffered. Everybody inside and outside racing has gone through a hard time over the past year. I have lost a lot, but there are good times ahead.”