MURRAY AND THE TT

Just what is it, that makes the TT so very special to so many? That was the question the late, great Murray Walker posed back in 2007 during the TT’s centenary celebrations. Of course, it was a somewhat rhetorical question, for Murray not only provided an immediate answer, but would have instinctively understood why the TT fosters such passion amongst its fans. For Murray was a fan also. Not just of motorsport, or motorcycling even, but the TT especially.

A lot has already been said about Murray’s captivating career behind the microphone, but to everyone connected to the Isle of Man TT, he was a true friend and life-long supporter of the event. His was a passion that didn’t come and go with any fashion: it was steadfast from beginning to end – a love affair that lasted almost all of his 97 years.

Of course, one of Murray’s earliest and greatest TT memories was watching his father, Graham, race on the Isle of Man as a works rider for Norton, Sunbeam and Rudge - winning the Lightweight TT in 1931 when Murray was still only just 7-years-old. Murray was just two, however, when he first stepped foot on ‘Mona’s Isle’ and, in one early memory, recalls his mum, Elsie, admonishing him for reading comics in the Grandstand instead of concentrating on the similarly heroic feats of his own father.

The TT, however, quickly became what Murray considered ‘an enormous part’ of his life, and in the period spanning much of the 1920s and 1930s, his TT life centered around the Castle Mona Hotel and the fearless competitors who stayed there. Along with his father, the young Murray would enjoy breakfast with all the ‘top people’ - riders like Jimmy Simpson, Wal Handley and Henry Tyrell-Smith, all of whom he considered ‘uncles’. 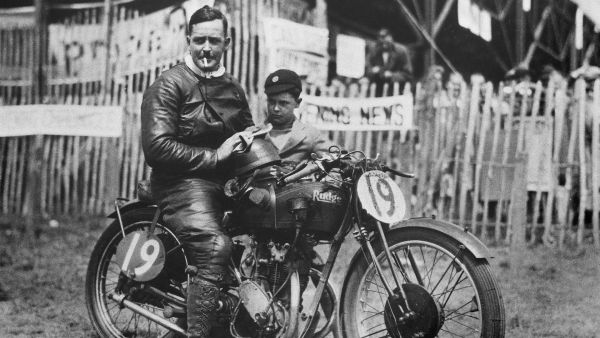 Graham Walker pictured at the 1931 TT with a young Murray

It was at this time perhaps that a notion formed with Murray - that a great sportsperson should not be measured and revered only for the trophies and medals that they win, but also for the way they compete; with integrity, dignity and generosity. Here, during the inter-war years, Murray didn’t have to look far for those of that character.

In short time, Murray got to know Jimmie Guthrie - a six-time TT winner whom he described as a ‘charming, quiet man’ - and Stan Woods, perhaps the greatest TT rider of that period. Woods stood in contrast to Guthrie, always chatting, always jovial. He made friends with ease and the eloquent Dubliner befriended young Murray too. A toffee-maker by trade, Stan would bring tins of those sugary delights for the Scouts who manned the scoreboard, reserving another just for Murray.

The TT Mountain Course, in particular, was a dangerous place to go racing, and occasionally one of Murray’s ‘uncles’ wouldn’t come back. Risk was not only found at the TT, of course, nor only in motorsport, but Murray remained of the opinion that risk should be part of life, that denying humankind the right to take risks would be a terrible thing.

Murray learnt something of risk himself, first as a Tank Commander in the Second World War, before testing his own luck with a spot of motorcycle racing. Watching the likes of John Surtees scamper off into the distance, Murray also learned that he wouldn’t be emulating his father – at least, not on two wheels. 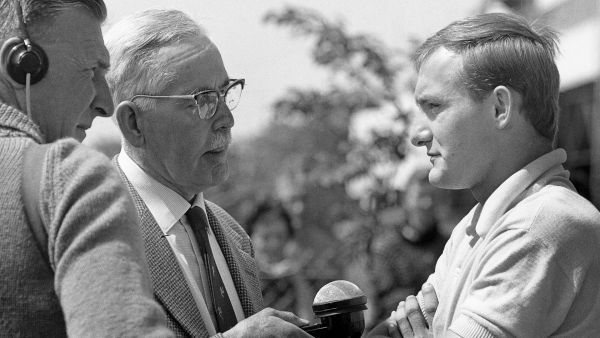 THE VOICE OF THE TT

Meanwhile, Graham had long moved into commentary, joining the BBC in 1935. Shortly after the war, in 1949, he co-opted Murray to sit alongside him at the TT races - creating the single father and son sports commentary pair within the corporation. While the lesser-known of the two today, Graham’s own TT legacy lives on in hundreds of commentaries and recordings such as ‘TT Sound Stories’. Released as a vinyl ‘long-player’, one such record has this dedication:

“Graham was a guide and inspiration to all who knew him. To him, the TT was as stimulating as the crisp mountain air he breathed so often in the Isle of Man. And through his voice, wit, wisdom and unflagging devotion, the magic of the Island races has captured the mind and hearts of millions of listeners.”

Murray was always quick to say he was just a pale imitation of his father, but the rest of us are just as quick to disagree. Murray’s is a legacy that will always be remembered, impossible to separate from countless TT stories. He later estimated that he commentated on over 200 races on the Isle of Man, weaving his own magic, and capturing the hearts and minds of the latest generation of listeners.

Like all TT fans, Murray too, had his own favourite memories, citing Bob McIntyre’s official 100mph lap in 1957 and the famous Hailwood versus Agostini Senior TT of 1967 as two of his stand-out moments. Indeed, he remained steadfast in his view that the latter, in particular, was one of the most exciting events in the entire history of motorsport. For Murray, who often allowed his own emotions to inform his commentary, that famous race of 1967 was never just about a duel between racing greats. What elevated the race in Murray’s mind was the genuine respect and admiration the two friends and rivals had for each other – something that Murray long felt was intrinsic to being a true sportsman. 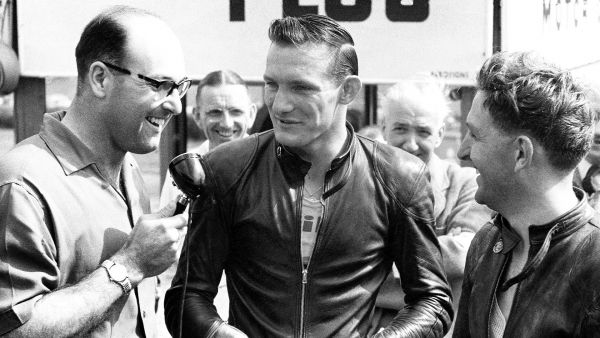 THE VOICE OF MOTORSPORT

Whilst the 1950s remained the ‘golden years’ for Murray, he took an awful lot of enjoyment and satisfaction to see the TT blossom once again, first with riders like Hailwood and Agostini, then with the subsequent influx of cutting-edge Japanese machinery. He continued to commentate at the event through the 1970s, eventually putting down that particular microphone as Joey Dunlop ushered in the arrival of the Formula 1 years.

The ‘other’ Formula 1 - the one on four wheels - was rarely covered at that time, but the BBC began regular highlights programmes from 1978 and recruited Murray as lead commentator - a role he maintained when live race coverage commenced during the early 1980s. As F1 extended its media footprint, so Murray’s fame grew - his popularity augmented by his enthusiastic delivery and encyclopedic knowledge.

He began to become more widely known over the following two decades, covering motocross and rallycross for the Saturday afternoon sports programmes on national television. Indeed, he seemed to be the ONLY voice of motorsport growing up here in the British Isles, and for Isle of Man residents, he can also be found adding commentary to the Manx International Rally towards the end of the 1970s. Murray had no doubt jumped at the chance to disembark on the island once more, but it wouldn’t be for some time that he would once again truly connect with the TT. 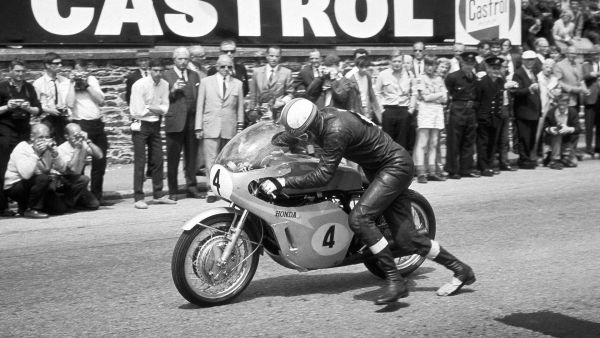 The start of the 1967 Senior TT, the race Murray considered the greatest event in the history of all motorsport

Following his retirement from full-time commentary in 2001, the next decade or more would provide new opportunities for Murray to reconnect with the TT, once again becoming a frequent visitor following the Centenary TT of 2007. For a man who once feared the demise of the ‘greatest motorsport event in the world’, Murray was delighted to find the Isle of Man TT Races had been ‘brilliantly revived’, with the racing ‘just as exciting as it used to be’.

Murray was also able to bring many of his favourite TT memories to life by providing commentary of the Mountain Course celebrations in 2011. As many thousands, perhaps millions, of listeners tuned in, he perfectly captured the atmosphere with the sort of mastery and genuine emotion that made him such a legend. With personal knowledge of virtually every machine and rider, Murray gave listeners a fascinating insight into 100 years of TT racing as he expertly turned back the clock on his own career.

Whilst Murray’s deep well of knowledge reached back decades, he was never ‘stuck’ in the past. Nor did he lament the passing of each era. At the TT, at least, the challenge has remained largely the same. As such, all of those lucky enough to spend time with him on the Island were continually struck by his continued passion - as well as his contemporary awareness. For although Murray witnessed some of the greatest riders in the entire history of motorcycle racing, he was also just as quick to recognise today’s competitors, entrusting the same respect and admiration to our modern-day ‘supermen’.

It is something that local ace Conor Cummins remembers well. Meeting first at the 2009 TT, the youthful Manxman soon became better known to Murray thanks (in part) to the feature-length documentary film, ‘Closer to the Edge’, both of them attending the premiere in 2011. But it was at the Goodwood Festival of Speed, when Murray’s distinctive voice called loudly across the Drivers Lounge, that the young man from Ramsey began to understand what standing the modern TT still had with the great man. ‘Conor!’ he shouted, with typical gusto - all the famous faces turning the way of the little-known island racer. 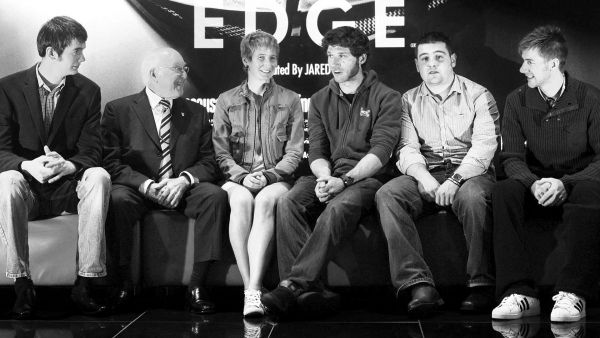 DID YOU SEE THAT?

Back at the TT, Murray would happily sit in the corner of the packed press office amongst his one-time industry colleagues, quietly taking in all the race action, happy and content to be exactly where he was. Each time a remarkable moment occurred, however, his unflagging enthusiasm led him to burst out: ‘Did you see that?’

With his eyes fixed on Glencrutchery Road, just the same as they were nearly 90 years earlier, Murray’s proclamations were made to no-one in particular, perhaps expecting that no-one was actually listening.

But of course, they were. They all were.