‘Out of office automatic reply’. Email didn’t really exist in 1984 when journalist Mat Oxley made his TT debut, but if it had, this is the message you would’ve received if you’d emailed him during that year’s TT. This is Mat’s story in his own words:

In November 1983 I joined Motor Cycle News as a road tester. I was 24-years-old and had completed my third season of racing, including my first international outings – the Le Mans and Bol d’Or 24-hour races and the European final of Yamaha’s notorious Pro-Am series.

In the spring of 1984, the MCN editor called me into his office. I was expecting another telling off for irresponsible riding. Instead, what I got was this: ‘Mat, the TT is re-introducing production racing and we’re sponsoring the race, so would you like to do the race for MCN and write a story about it?’ ‘Er, no,’ I replied.

Two of my biggest racing heroes when I first got into bikes were Pat Hennen and Tom Herron. Hennen ended his career at the 1978 TT, where he sustained serious head injuries. Herron was killed at the following year’s North West 200. Therefore, I pretty much hated real roadracing. Also, I was still young and a bit of a nutter, so I didn’t think it would be wise to have a go at racing between drystone walls, pubs and telephone poles.

Then I got to thinking… How much work would I have to do during the two weeks of practice and racing on the Isle of Man? I returned to the editor’s office to ask him. ‘Just write a story about the race, that’s all,’ he said. ‘Okay, I’ll do it,’ I replied.

Therefore, I got into racing at the TT simply because I’m a bit lazy. Two weeks of racing around the Isle of Man and writing one story sounded a much cushier deal than rushing around picking up test bikes, doing photo shoots, going speed testing, writing road tests and returning test bikes. Road testing may have been the best job in the world, but still…

The technical rules for the new proddie TT were very strict – basically you couldn’t do anything to the bikes except remove the side and centre stands, change the gearing and add race plates. Some riders didn’t even bother removing the indicators. This suited me because I much prefer riding bikes to fiddling with them.

There were three classes to choose from: 1500cc, 750cc and 250cc. I chose the smallest category, because it seemed the most sensible way to acquaint myself with the 37.75-mile Mountain course. The hot-to-trot 250 road bike of that time was Suzuki’s first RG250, a 45-horsepower parallel twin good for around 120mph coming down the mountain. Perfect. I blagged a bike from Suzuki, some tyres from Avon and off we went.

We arrived a few days before practice got underway so I could learn my way around the course in a van and on a road bike. I’d already spent the previous few weeks watching the very first full onboard TT lap on repeat – a VHS of Joey Dunlop riding his RS850 in the previous year’s TT.

I didn’t enjoy my road bike laps. All I saw was brick walls, jagged cliff faces and lots of other stuff I didn’t want to crash into. Eventually I came to a decision – I wasn’t going to race. But I couldn’t just walk away before practice had even started, so I resolved to do one practice lap and then give my excuses: the TT wasn’t for me.

First practice was an early morning session – 4.30am. It was a beautiful morning – bright post-dawn sunshine – but very chilly. Off I went down Bray Hill, orange novice jacket flapping atop my two-piece zip-up leathers. I had already memorised the entire circuit, but of course actually riding it is very different to merely remembering which way it goes. At least I didn’t turn left at any right-handers or right at any left-handers.

I’m not exactly sure when it happened, but it might’ve been while I was riding through the village of Kirk Michael – a 30mph zone – flat out in sixth gear, sweeping left and right along the high street. I said to myself, “Oh my God, this is the best thing in the world, ever!”

I hadn’t grown up thrashing minibikes around dirt tracks or minimoto circuits, I’d spent my teens hammering road bikes around country lanes, always in fear of getting wiped out by cars or nicked by the police. At the TT there are no cars or cops to worry about – just country lanes along which you are encouraged to go absolutely as fast as you dare. I was in paradise.

Early morning practice sessions were always followed by a full English breakfast with your mates in a Douglas café, with everyone chatting about the morning’s madness and listening to Manx Radio. The radio announced the results of my first TT practice session – I’d been third fastest. All those years playing the fool on the backroads of Hampshire were paying off.

Learning the TT course isn’t like learning a normal circuit, and not only because it’s 15 times longer than most. There are hundreds of thousands of details – some big, many tiny – that your brain needs to absorb and store. Even on a little 250 all those details make the difference between winning and losing and many of them make the difference between coming out alive or not. There were several parts of the course that struck terror into me – places where you knew you absolutely must not roll off the throttle because you’d lose too much time, but if you got your peel-off point a few metres wrong you’d lose a lot more than a few tenths of a second.

The race was scheduled for Friday, last day of race week, six days after my last practice session. Not ideal because during those days I knew I’d lose a bit of intimacy with the track and the bike. Inevitably, Motor Cycle News took advantage, assigning me features to research and write, which kept me busy until the nerves of dread crept up on me on Thursday night.

It’s not easy to describe the feeling you have while awaiting the start on Glencrutchery Road. The nerves aren’t like any other race because the TT isn’t like any other race. You feel so sick and scared that you just want to curl into a foetal ball and pretend it’s not happening. And then you’re set free and you’re charging down Bray Hill for real.

I had a few scary moments during the three-lap race – sending photographers scattering when I arrived at Signpost too hot, scaring a few spectators off the wall at Waterworks and very nearly riding into the wall exiting the super-quick Bungalow Bridge left-hander on the mountain.

On the second lap I caught Manxmen Graham Cannell and Chris Fargher, engaging in an unexpectedly vicious battle with Cannell, who I knew from the Pro-Am series. I got past him a few times, only for him to draft past me and chop in front, nearly taking my front wheel away. This is standard practice on short circuits but seemed a little excessive in top gear around the TT. Eventually I got rid of him, to lead the race at the end of the second lap, when I stopped to refuel. There was karma for Cannell who ran out of gas.

At the chequered flag I was third, 36 seconds behind three-times TT winner Phil Mellor, riding a Yamaha RD250LC, 16 seconds behind Fargher and just ahead of Gary Padgett and Charlie Williams. I’d enjoyed myself immensely, scared myself innumerable times and was already making plans for 1985 on the ferry home. 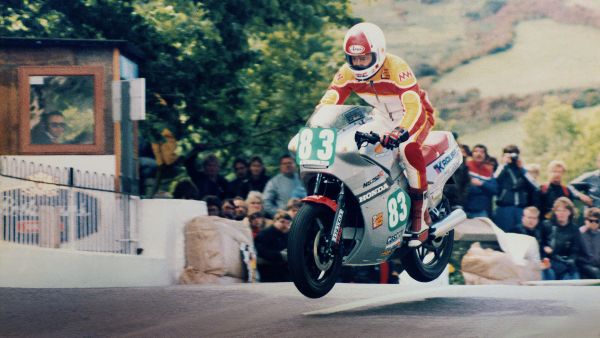 In 1985 I blagged a Honda NS250R from Honda UK, which had imported ten of the bikes for the Production TT. The little v-twins filled seven of the top eight finishing positions and I won the race, beating Cannell (yes!) by ten seconds and breaking the lap record.

In 1986 I blagged one of Yamaha’s first TZR250s, which I rode to the first 100mph 250 proddie lap. The race went like a dream. For a while. I was leading by eight seconds after two of the three laps when I caught the 750 tailenders. (The 750 class had started a few minutes before the 250s.) There were three of four Suzuki GSX-R750s with wobbly riders onboard who blasted past me on the straights and got in my way through the twisty bits.

I was raging – hooting my horn at them and worse. Finally, I put them behind me when it started raining on the mountain, but I was in too much of a hurry to make up lost time. Accelerating out of the Dip onto Glencrutchery Road for the last time the rear went light over the brow and came around on me. Down I went, luckily avoiding the wall. I remounted to finish third. I fully realise how wrong and feeble this is, but 36 years later I still hate those wobbly 750 riders!

My last TT was 1989, because the fear had returned. It had been a short and very sweet love affair. 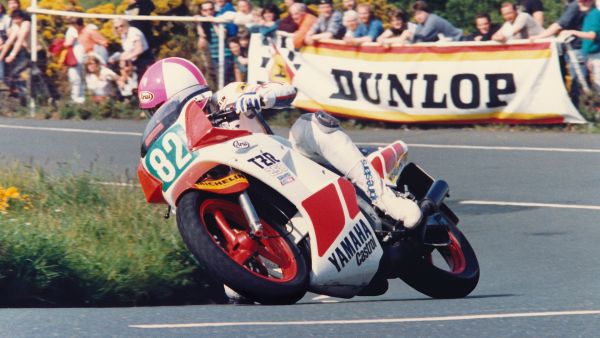