The promising TT career of Adam McLean, one of road racing’s brightest young stars has been blighted by injury over the past three seasons, but the Ulsterman won’t let the pain destroy his dream of winning a TT. The event’s leading newcomer in 2017, the 21-year-old was beginning to make a major impression between the hedges before a huge crash at the 2019 Tandragee 100 left him with an arm injury that has thwarted his progress.

McLean was riding the crest of a wave before Roy Hanna’s ER6 Kawasaki fired him into a County Armagh field during a high speed Supertwin contest with Derek McGee. ‘It was an intense battle and I was over riding a slower bike.’ he reflects. ‘It was my first big crash in over four years of road racing. Maybe I wasn’t treating things with the respect I should have been after getting away with other stuff, but it has been a hard lesson learned and I was fortunate to get away with it.’

Splitting his pelvis in two, breaking a shoulder, collarbone, three ribs and smashing his right arm to pieces wouldn’t be considered ‘getting away with it’ by any ordinary mortal, but road racers have different criteria when it comes to injury assessments.

‘There had been so much surgery to put the injuries right that I woke up a very sore boy.’ McLean grimaces. Because the trauma was so extensive, his body’s natural healing process struggled to cope and the bone in his damaged arm was slow to grow back.  A graft was ruled out by the surgeons because there were fears it could have exacerbated the nerve damage already suffered.

‘I spent hours and hours in a hyperbaric chamber during 2019 trying to help the bone to knit.’ McLean recalls. After 13 months the surgeons told him the arm’s recovery was as good as it was going to get and he decided to return to action in the British championships and take in the Cookstown 100 - Ireland’s only road race during the Coronavirus decimated 2020 season.

McLean had joined Winston and Jason McAdoo’s Kawasaki squad in 2018. The family, who have steered riders like Ryan Farquhar and Conor Cummins towards TT glory, live on the Cookstown circuit and victory in front of his team bosses in the Supersport and Supertwin races last season was a huge boost for McLean’s morale as he battled his way back to form. 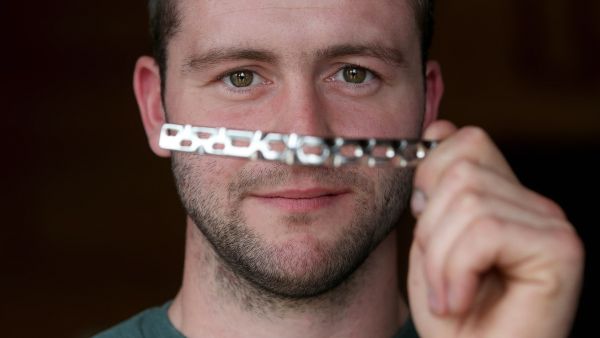 “I was distraught. I was crying my eyes out like a child.”

But a month later disaster struck once again at Brands Hatch. Riding for Binch Racing in the Junior Superstock series, McLean slid off his R6 Yamaha. ‘I broke my arm again at its weakest point.’ he explains. ‘I was taken to King’s College hospital in London where the surgeons removed the three plates and 22 screws that were holding it together. I was distraught. I was crying my eyes out like a child. One of the nurses asked if I was in pain and I told her it might mean I would never be able to race again.’

Deciding he wanted to be operated on by the surgeon who had operated on the original injury, McLean headed back to Belfast, the English medics waving him on his way with a bottle of morphine and a syringe to keep the pain at bay. ‘The operation was successful, but I had no movement in my wrist between October 2020 and February 2021.’ McLean recalls. ‘I wore a splint to support it during what was just a waiting game to see what would happen.’

Slowly the feeling returned and McLean encouraged the healing process by riding his trials bike on the family farm. ‘Getting function for throttle control was a big turning point,’ he says - with a typical road racer’s sense of priority, but McLean admits the arm will always be weakened by the double break: ‘It will be an issue for me for the rest of my life, which isn’t ideal, but that is outweighed by the bigger picture of getting back to doing what I do.’

And racing a motorbike is what he does. Growing up on a farm in rural Ulster, there were always bikes and quads for the youngster to scoot about on. Regular outings to Irish road races like the North West 200, Ulster Grand Prix and the family’s local event, the Cookstown 100, fostered an interest in the sport, but it was a trip to a Supercross event in Belfast that would have a defining effect on the direction on McLean’s young life.

‘I won a mini moto bike in a raffle at the Supercross show and I started racing on the little bikes when I was seven.’ he explains. ‘I won Irish championships and competed at British championship level before I moved on to 125s on the Irish short circuits when I was 13.’ 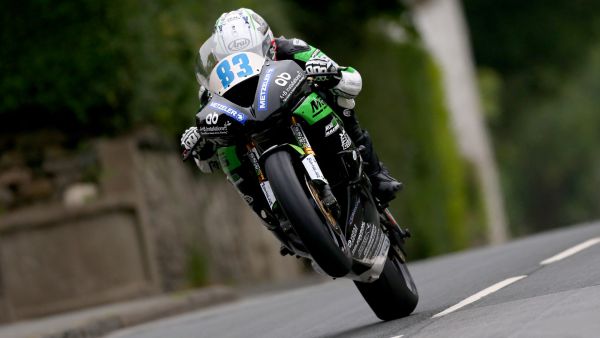 “I was a spectator at the TT in 2016 and vowed to go back and race the following year.”

There were a few trips across the Irish Sea to compete in the British 125 series, but a lack of funds hindered the youngster’s progress and he quit racing altogether for a couple of years. After a period of being a ‘normal’ teenager, he decided to make a comeback in 2015 - only this time as a road racer: ‘I raced with my mate, Cathal Graham. He was 20 and I was 18. We had no money, but he had a van and we added a caravan for £400. We drove it the length and breadth of Ireland, racing for nothing more than the craic.’

Despite enjoying the greater opportunities that came with road racing, McLean still maintained an interest in the short circuit scene, competing at Kirkistown, Bishopscourt and Mondello Park. On the roads he raced in the 125cc class and the Junior Support series for beginners. Despite his Mum’s misgivings, a podium finish in his first ‘between-the-hedges’ outing at Cookstown helped win her round. His first win came later the same year at Kells, beating experienced campaigner, Paul Robinson.

McLean’s rapid progress brought him to the attention of Ryan Farquhar - who he had helped at the 2015 TT. Farquhar provided Adam with a ZX6 Kawasaki for the 2016 season and by 2017 he was beginning to claim some major scalps. Indeed, it was at that season’s North West 200 where McLean really made people sit up and take note as he diced wheel-to-wheel with Alastair Seeley and the Dunlop brothers, Michael and William. It was time to try the big one. 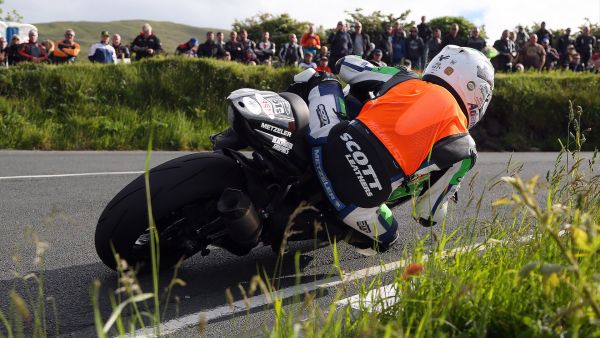 “Some people thought I was going too fast too soon, but I had done so much homework.”

‘I was a spectator at the TT in 2016 and vowed to go back and race the following year,’ McLean explains. ‘There had been chat about doing the Manx Grand Prix, but the TT organisers gave me a lot of help. I was on the island once or twice a month for four months, learning the circuit. I did well over 100 laps in the car so I set myself a target – a 120mph lap.’

McLean hit that mark during the Wednesday night of practice week and finished the fortnight as the fastest newcomer, recording a fine 17th place finish in the Supersport TT. ‘Some people thought I was going too fast too soon, but I had done so much homework,’ he says flatly.

McLean returned to the Mountain Course 12 months later - this time with McAdoo Racing - to secure a top ten finish in the Lightweight TT. The Tobermore man then took the McAdoo ER6 Kawasaki to victory at the Ulster Grand Prix before swapping to a 250cc Yamaha in time to make his Classic TT debut – this time with Binch Racing. Finishing second behind fellow countryman, Lee Johnston, and ahead of the vastly experienced Ian Lougher, McLean claimed his first Mountain Course podium.

But as is so often the case in road racing, the sweetest moments can have a bitter edge. The death of his McAdoo Kawasaki team mate, James Cowton, at the Southern 100 was a massive blow to the young Irishman. ‘That has been the worst thing that I have experienced in racing.’ McLean says.

‘I was just behind James when he crashed. It put me in a no-man’s land. I didn’t know if I even wanted to race again.’ 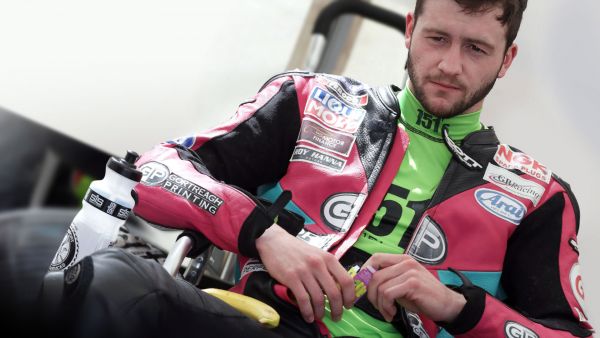 “What draws me back to the TT is the Mountain Course … I just want to ride it again.”

THE DRAW OF THE MOUNTAIN

McLean’s arm is still far from being 100%, but it has recovered sufficiently to allow him to compete in short circuit events. He also had a largely successful weekend contesting the road races at Armoy, finishing on the podium in the Supersport and Supertwin races, but sitting out the Superbike events to ease the pressure on his still fragile arm.

Although he has experienced his fair share of trauma during his career, McLean is unbending in his determination to prove his talent. A new challenge awaits with Ian Lougher’s team in British Supersport, but the main priority remains a return to the TT, where the experience of the last few seasons has led to a more considered approach.

‘What draws me back to the TT is the Mountain Course.’ McLean says. ‘It requires a different mentality from the Irish roads and I just want to ride it again. It is the next step in speed and concentration, and has to be treated with respect. After my crashes I know what can happen, so I will enjoy the TT for what it is; try to keep making progress and see where it takes me.’