The Isle of Man TT runs in the blood, which is why so many sons of fathers have contested the races, from the Dunlop family to Michael Rutter, Peter Hickman and 2022 newcomer Rennie Scaysbrook. But what influence do TT dads really have over their TT sons?

The Isle of Man TT is steeped in history and so too are some of the families that have contested the event over the decades. Most famously there is the Dunlop dynasty, but there are other sons of fathers racing on the Island, because it’s the kind of challenge that gets passed down through the generations.

Michael Rutter will turn 50-years-old a few weeks before the start of the 2022 TT and he can hardly remember a year of his life when he didn’t spend two weeks on the Isle of Man each summer.

“I’ve been going there since I was born and I have so many fond memories from my childhood. I can recall all the old hotels down on Douglas promenade and the amusement arcades near the Villa Marina. I always picture those TTs bathed in sunshine, but then again, I also remember being sat in my dad’s van in the sodden paddock, with the windscreen wipers doing their best and dad waiting for the race; delay after delay. 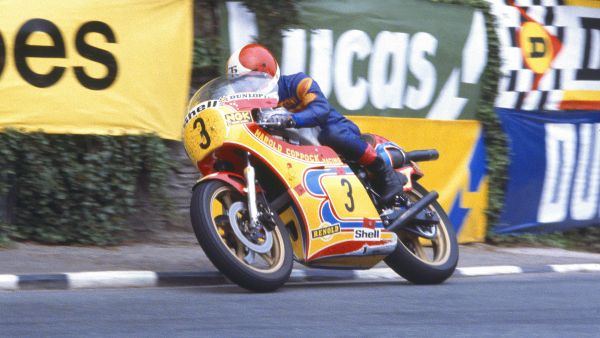 “Going to the TT always felt like a massive adventure compared to all the other races we went to. I wasn’t the best at school, so I was allowed over to the island for the full two-weeks. I loved getting on the ferry, which was often the Lady of Mann with its wooden decks and the cinema at the bottom. My excitement was off the scale!

“Dad loved the TT too, so it was always a big thing in our house. There were paintings of him jumping Ballaugh Bridge and all that kind of thing. I always wanted to do the TT, but when I started racing on the short circuits, I wasn’t actually sure I’d ever be good enough to race there.”

Nevertheless, Michael contested his first TT in 1994, three years after his father Tony rode his last. Between them they have won 14 TTs, seven each. The sweep of history that covers father and son is awesome.

Rutter senior, who passed away two years ago, entered his first TT in 1965, riding a 350cc single-cylinder Norton Manx in the Junior TT. He finished 46th, about 28 minutes behind the top three. And what a podium! Honda’s Jim Redman flanked by Yamaha’s Phil Read and MV Agusta’s Giacomo Agostini.

He took his first win in the 1973 Junior, riding a Yamaha twin, just over a year after his only child was born, and his last victory in the 1985 TT F2 race, riding a Ducati twin. A few weeks later Rutter was seriously injured during an F1 race at Montjuic Park, Barcelona, Spain. That was the end of his career as a professional rider. 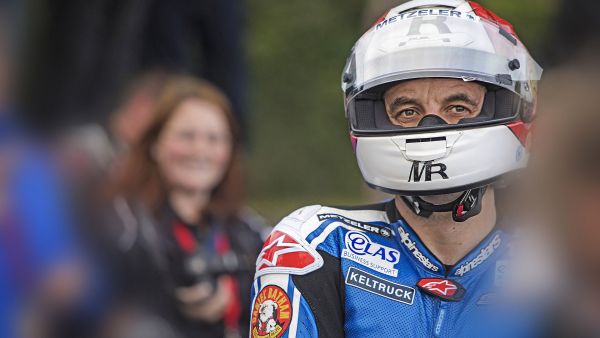 Tony returned to his beloved TT two years later, but was never again the force he had been. Michael, however, was already aware of the dangers of road racing, having grown up with the TT from an early age.

“I know exactly where I was when I realised there was downside. I was very young at the time and we were making our way towards Douglas Quay when the local radio announced that a rider who I knew had died. That’s when I thought, woah, this is serious.

“When I started racing at the TT my dad didn’t really give me advice. However, I already knew the TT Course from driving around in the van with him all those years. I also learned a lot from the way he prepared. His preparation was always perfect – making sure this is right and that is right.

“He didn’t give me much praise either, unless I’d done well. Mostly it was, ‘I could’ve gone through there quicker!’ He was hard on me in some ways, but when I won my first race, he was very proud, because he knew how difficult it was.” 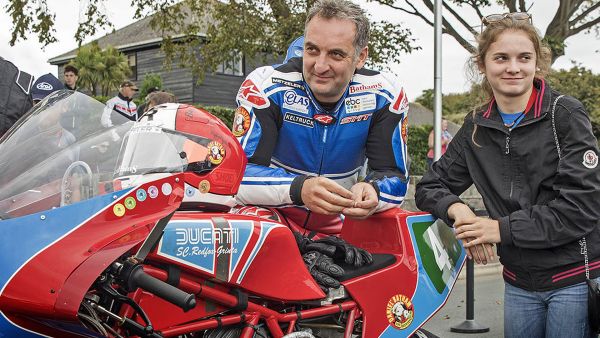 IN THE BLOOD: MICHAEL ON THE GRID WITH A REPLICA OF TONY’S DUCATI

Dave Hickman, father of current lap record holder, Peter Hickman, had a great TT career in front of him in the 1970s. Hickman senior proved himself around the Mountain course by winning the 1977 Lightweight Manx GP. He made his TT debut the following year, but his career was ended by injuries sustained in a crash at Mallory in 1979. Perhaps unsurprisingly, dad Hickman didn’t want his son to go racing. At all.

“He pushed me into football, cricket, even darts, basically anything that was far away from two wheels. When I was twelve, I bought my own motorbike without telling him and hid it around the back of the house. When he found the bike, we had an argument and he said, ‘If you’re going to do it anyway, then I’ll help you. However, the condition is that you never, ever, go road racing, or I’ll never talk to you again.’”

Hickman started racing minibikes aged 13, then progressed through Aprilia Super-teens, Supersport 400 and Superstock 1000 to contest his first British Superbike season at the age of 19. 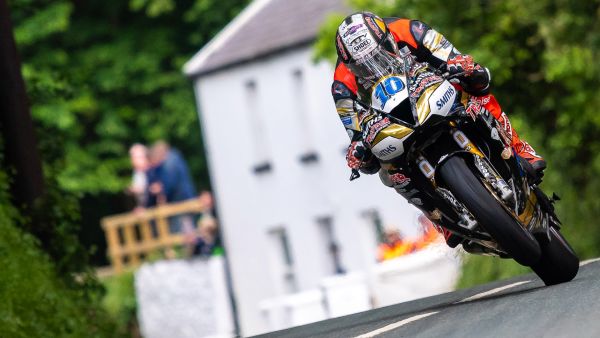 “When I decided to do the TT, my parents knew something was wrong because I asked them out for a meal! They thought I was getting married or had got someone pregnant. Instead, I told them I was off to race the Isle of Man TT. They took it a lot better than I thought they would! Bear in mind I was then 27, so no longer a kid.

Like the Rutters, there’s not been much father-to-son advice about the TT, because racing around the Island is so different today. 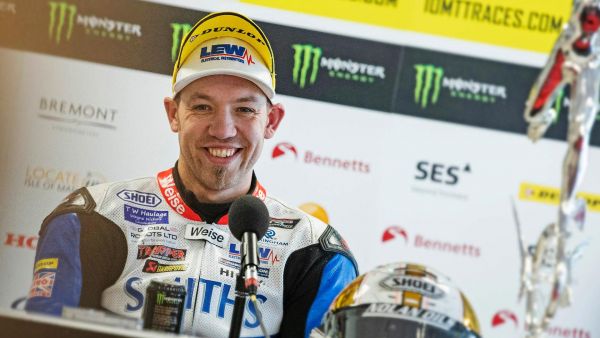 THE KID IS ALRIGHT: PETER USED HIS HEAD ON THE WAY TO THE TOP

The TT’s most experienced winner and its lap-record holder will be joined this year by another rider whose father has some TT history.

After Hailwood retired from motorcycle grand prix racing and Formula 1 cars, he set up home in New Zealand. By the mid-1970s he was getting bored and started racing bikes again in Australia, teaming up with Jim Scaysbrook to contest the prestigious Castrol Six Hour race at Amaroo Park in 1977. No one knew it at the time but this was Hailwood getting back into the swing of things for his TT return the following summer.

After a difficult week of practice, marred by serious accidents, Scaysbrook made his debut in the 1978 F1 race, which Hailwood won, following a 11-year absence from the TT. The Aussie returned two years later for another crack at the course and contested his last TT in 1984, riding a 350cc AJS 7R in the Historic TT. 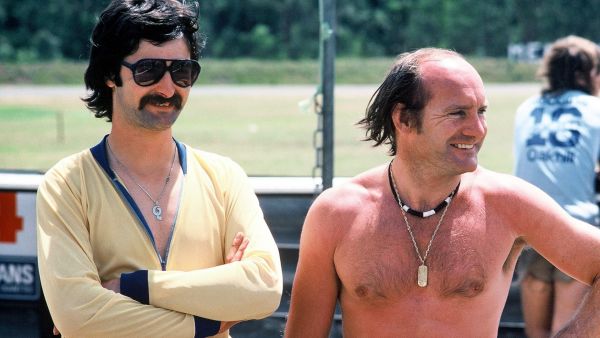 FROM PEAK TO MOUNTAIN

Rennie was only two years old in 1984, so he stayed home in Australia while dad crossed the globe for his TT finale.

“I never saw my dad race the TT, but there were always TT photos around the house and in the garage. I really got hooked on the TT when I started memorising the Joey Dunlop film, V for Victory, which I had on a VHS cassette. But the video I remember more than any other was the TT review video from 1994 – the last year Steve Hislop raced the TT.

“I’ve always wanted to do the TT, but it was never something I thought was possible. I did have a crack at real road racing in New Zealand, and did quite well, but then I went to live in the USA to work for Cycle News. A few years later, I started doing the Pikes Peak hill-climb [in Colorado]. I entered four years in a row and finally got the record in 2019.”

Pikes Peak is a 12.4-mile course that takes riders from 1,440 metres above sea level to 4,300 metres. Most of the course is super-fast with no margin for error, so Scaysbrook will need all of the skills he used there to master the Mountain. 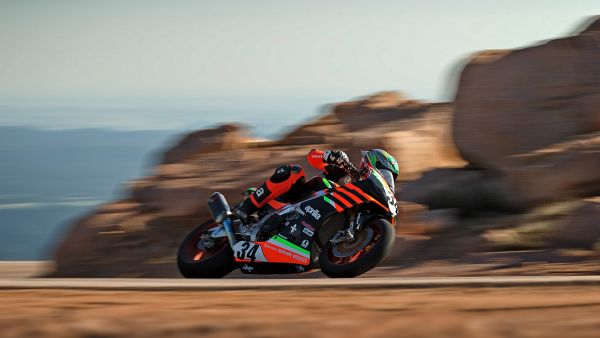 RENNIE SCAYSBROOK IS THE ‘FOREVER’ RECORD-HOLDER AT PIKES PEAK

“Even after Pikes Peak, the TT was still just a pipedream to me, until one day I got into a texting chat with [Aussie TT stalwart] Davo Johnson, who’s a good friend of mine. I was sat on the beach in California, chatting away with him in Australia. I asked, ‘What’s the chance of me getting a TT ride?’

“Two days later I had accepted an invitation from Paul Phillips to visit the Island. I was to complete a number of initiation laps and make sure that, yes, the TT was something I really wanted to do. I arrived in November 2019, did one lap of the course and thought, yeah, I’ve got to do this!”

Echoing the thoughts and sentiments of Hickman senior, Skaysbrook senior only had one real piece of advice for his son: You’ve got to use your head.

So, what should we make of these TT dads? The pushy parent isn’t to be found here. In fact, some of our TT dads have been outright discouraging! Still, we can’t deny the influence each has had on their young sons, if only to expose them to the greatest show on earth. Rather than a push, it’s the pull of the TT that ultimately draws in their sons, while our TT dads continue to respect their freedom to choose.