One is a history maker, famed for being the only female to tackle the Isle of Man TT on two wheels and three…the other has won countless races and championships on classic machinery and had all but retired. Yet a chance meeting at Donington Park in 2020 was all it took to bring Maria Costello and Vicky Cooke together, setting the wheels in motion for a brand new, all-girl racing team with its focus on the TT 2022.

Both had one sidecar TT under their belt. Costello had hit the headlines the year previous as she made her debut with Julie Canipa in the chair, making her first race start on three wheels on the same day she also lined up for a Lightweight TT.

Vicky, meanwhile, had taken a few years out after a tough introduction to the Mountain Course in 2017 alongside Vince Biggs. It hadn’t worked out the way either of them had hoped and she’d had a self-imposed break from the sport, unsure if she would ever return. But after months stuck at home as the Covid restrictions caused havoc last summer, the project manager from North Yorkshire decided to take a trip to Donington Park to catch up with old friends.

‘It was pure chance,’ Vicky reveals. ‘I’d been out of racing for a couple of years, I’d sort of taken a step back from it - fallen out of love with it really. I was a little bit low on confidence, but I just went to see what was happening and watch some mates racing.

‘Maria was racing with Sarah Stokoe and we sort of bumped into each other and got talking. We were chatting for about an hour about what we were both doing and what future plans we had. We then swapped numbers, but to be honest, I didn’t really think too much about it until my phone rang a few weeks later.’

Maria may have had her hands full with the racing that weekend, but she was instantly impressed with the then 27-year-old: ‘Since my first TT I’d done a few races here and there with Sarah, but she seemed to be making her own plans. I was looking for full-on commitment, which I hadn’t really had before. I quickly realised Vicky and I we were on the same wavelength. We caught up on the phone a few weeks later and I loved her attitude straight away - it was so in tune with my own.

Costello had been seeking a long-term passenger ever since she first climbed into her sidecar, but like most outfit pilots had struggled to find the perfect match. In her sidecar TT debut in 2019, she’d crossed the line 21st in the opening race before scoring a 17th in the second. However, after an at-times-difficult fortnight, she and Canipa parted company after the event.

Cooke’s first TT, meanwhile, had almost put her off the sport completely. 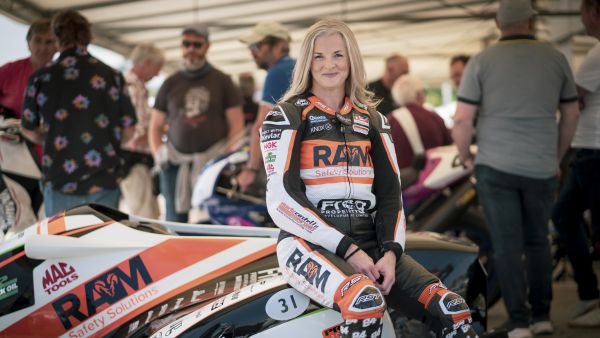 Maria made an impressive debut in the sidecar TT, despite the schedule being affected so badly by the unseasonal weather

KEEPING IT IN THE FAMILY

Vicky’s stepfather, Eddy Wright, had ensured sidecars were a way of life for the family. His many years of racing the roads, European, and British championships had rubbed-off and it was almost inevitable she would find her way into an outfit before long. ‘It’s a bit of a cliché to say, but it’s something I’ve always wanted to do and I can vividly remember being about nine, stood at Quarterbridge and turning to mum and saying “Mummy I’m going to do that when I’m bigger.”’

On her 16th birthday she contested her first race at Donington Park. ‘My step-brother took me, we just put the bike in the back of a van and off we went, no testing or anything. We did alright too, certainly didn’t disgrace ourselves and that was the start of it all.’

Over the next few years, she passengered in various Formula 2 outfits until one day when Eddy announced he needed a passenger for his Classic machine. ‘I was still a teenager and said, “I’m not getting on that, it’s for old men” but he won and I ended up on it! Then I stayed with the classics.’

Cooke became a regular podium visitor, winning the CRMC championship with Brian Gray in 2013 before teaming-up with Vince Biggs to race at Chimay. The pair raced together for three more seasons and, as a natural progression, ended up tackling the TT together in 2017.

‘Those few years were amazing, probably the best I’ve had in racing. We won whatever there was to win. We broke lap records and we won the Pre-TT Classic three times. But then we went to the TT and that didn’t work out so I decided to take some time out. I did have a few reservations about going back, I sort of knew I wanted to, but my confidence had taken a knock.’

Cooke’s low confidence was certainly on her mind as she spoke to Costello during those early weeks and even though she was keen, she knew turning up to a TT with hardly any time on the bike would be a problem. 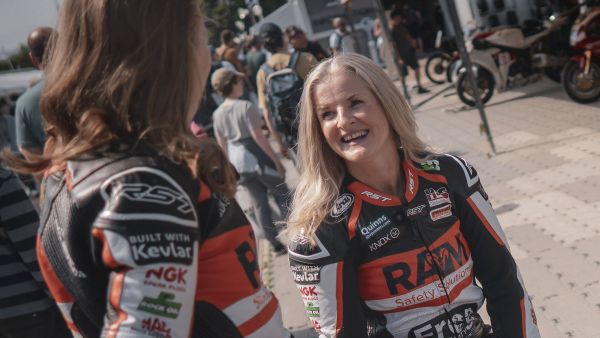 But fate intervened as the Covid crisis rumbled on, leading to the cancellation of this year’s event and suddenly with more than a year to prepare it all fell into place.

‘This has become a bonus year for us,’ explains Costello. ‘Once we realised there wasn’t going to be a TT, we knew we had plenty of time. That’s when we decided to get her on the sidecar to see how we worked together as a team. Our first meeting was at Oulton Park and we had a ball. We had some ups and downs, but ultimately it was great. Vicky hadn’t been on a modern sidecar for a long time, but it just worked; it was like all the pieces were coming together.

‘We have a whole year to work things out and it means we can take our time and explore everything so we can get it right. It means we can try lots of new things. We have the new fairings now which we’re going to adjust for her, I’ve already got her in RST leathers, it’s about making her as comfortable as possible on the thing. Spending the time now working on these things means by the time we get to next year we should’ve sorted out all the awkward bits and we can just concentrate on racing.’

Both Costello and Cooke have had experience of things not always working out with racing partners and this was an issue both wanted to address from the outset. ‘One of the first things I said when we started talking was that I felt it was important we got on well away from the bike,’ reveals Cooke. ‘Maria obviously felt the same. You’re on the bike for such a small space of time compared to the time you’re off it and it will only work if you can get on and be mates… which is what we are.’ 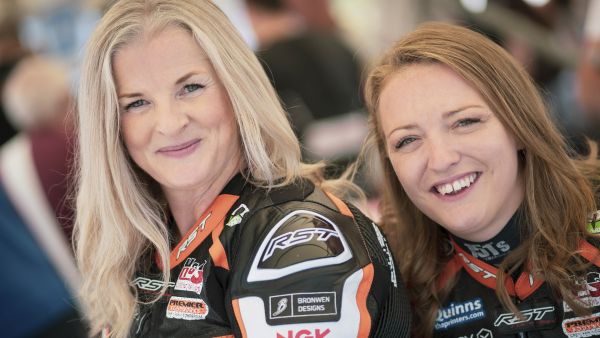 “Maria is the one to thank, she’s given me the opportunity and the confidence”

‘We speak pretty much every day on the phone and we have a laugh. Yeah, it becomes serious in the week leading up to a race, but we do have a great relationship off the bike as well as on it. You’re at the TT for three weeks and if you’re not getting on with someone, that is a long time! It all has to work.’

Maria agrees: ‘It’s like any relationship, isn’t it? You want commitment. If you’re on the same page and share the same attitude and aspirations, it all works. We’ve both had our moments at race meetings, but we are communicating better than I have with any other passenger and she’s giving me great feedback.

‘I’ve learnt so much in short amount of time we’ve been together. For instance, I’ve been wrestling with the bike for much of the time and I thought it was normal, but we were at a trackday recently and Vicky said “Oh, well, you know I can make that better for you?” The next lap out we came through the same part of the track and I’m no longer fighting with the bars. It was huge and this is the difference. It’s just amazing, it’s all so valuable.’

For Cooke, being able to pass on her knowledge has helped her own confidence improve and she believes it’s all thanks to the solid friendship they’ve built. ‘We can have a laugh and that’s important - like I often joke that she just sits there and twists the throttle, it’s me doing all the hard work! But this is why it’s working. I’m not afraid to be honest and neither is she. It is a lot easier when you’ve got a rapport.

‘There are two of us on this bike, it’s only going to go around well if we’re both happy, otherwise it doesn’t work. For Maria to say she’s enjoying my feedback is quite nice for me actually and it reinforces the idea that we’re gelling as a team.’ 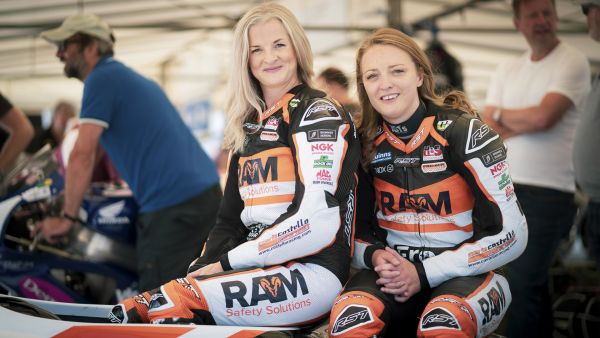 “Achieving something at the TT is very special, and it’s not something you have too many shots at”

With a number of short circuit outings planned for the remainder of 2021, it’s all looking good for the pair as they push on with their preparations for next year’s TT. For Cooke, it’s all about mental and physical fitness.

‘The TT is so massively different to anything else. I can admit it now that when we went there in 2017, I was a bit naïve. I was race fit, but I wouldn’t say I was TT fit. It also takes it out of you mentally so it’s important to be in a good head space. Mentally I’m in a good place too. I’ve got no distractions and Rick Long is working with me as a mentor.

‘I watch two onboard videos every day without fail, no matter where I am or what I’m doing. It’s become part of my routine so I can get to a stage where I can listen to what the bike’s doing to know where I am - rather than bobbing my head out and having a look. The day I left the TT - even though it hadn’t worked out for me - I knew I wanted to come back. I was starting to think it wouldn’t happen, but Maria is the one to thank. She’s given me the opportunity and the confidence.’

As for Maria, she’ll be playing it as she always does, by not putting any pressure on herself. She does admit, however, that the racer in her still has big ambitions: ‘I won’t lie, I do want to go after the female sidecar lap record - there’s no two ways about it - but I still think of myself as a newbie to this and I’m still learning every time I go out. I’m old enough and experienced enough to know not to put pressure on myself, it’s just not how I approach the TT.

‘Vicky is proving she wants a successful TT as much as I do, and that attitude alone will take us far. She’s also making it enjoyable and we all know speed comes when you’re happy. We’re a million miles ahead of where we’d normally be at this point. Like me, she knows that achieving something at the TT is very special, and it’s not something you have too many shots at so you need to make it count.

‘I’ve always been in love with the TT, but it means even more to me since it was taken away by Covid. It’s been a tough time without it, but now it’s all on track to return next year I’m so excited. It’s going to be incredible just to be a part of it once again.’