Ah, an old black and white photo. Is this going to be some run-of-the-mill retrospective from the dusty old pages of history? Well, no. Nothing much is ordinary when it comes to the history of the TT, nor its protagonists. Nothing is ordinary about the life of Walter Leslie Handley either. In fact, his life can read more like something fantastical - more like that of Walter Mitty, than Walter Handley. Whose is the more fascinating? Maybe you should decide.

Where to begin? Let’s start in 1902 and the birth of the man who’d become known more simply as Wal. Born in Aston, Birmingham, Walter Leslie Handley could have been a Victorian had he arrived much earlier. Edward VII was now monarch, and the Edwardians were only just beginning to find the enjoyment and benefit of motoring. Theodore Roosevelt became the first President of the United States to ride in an automobile, while here in Europe, the Targa Florio was still four years away, the TT five.

Born into that period in the 20th Century when men died in their hundreds and thousands, Wal would know death from an early age. He wouldn’t make it as far as his 40th birthday, but it would be no race track that claimed his life so prematurely. No one, certainly not Wal, could have predicted the events of the first half of the 20th Century, nor how much the world would change, with war powering the industrial landscape, sharpening invention, and shaping lives.

Wal didn’t have the best of starts. In fact, life was tough. Death first came to Wal’s door when he was just 9 years-old. His father died of cancer, leaving the family in a precarious position. Lacking financial security, Wal left school aged 12, and entered the workplace, trying his hand at various jobs while the first of two World Wars raged across the channel.

It was when he joined the OK motorcycle firm as a junior tester and motorcycle messenger that things started to look up, subsequently stepping into the world of competitive motorcycling through speed trials and hill climbs. Things were also looking up elsewhere, and with the guns finally falling silent, the TT returned to the racing calendar in 1920. Two years later, aged 20, Wal lined up on an OK for the very first (stand-alone) Lightweight TT.

THE COMEDY OF NOVICE FROM BIRMINGHAM

Setting foot on the Isle of Man the day before his first practice lap, Wal carefully set about preparing his OK Junior for the next day’s early morning session. Waking to find the island shrouded in heavy mist, and unfamiliar with the Mountain Course, he duly turned north and headed off round the course in the wrong direction before an attentive flag marshal stopped his progress at Governor’s Bridge. The incident is well-known, but considering practice took place on open roads, it’s not so incredible as it perhaps seems today. Nevertheless the young Walter was ridiculed in the national press, with one paper running the headline ‘The Comedy of Novice from Birmingham’. 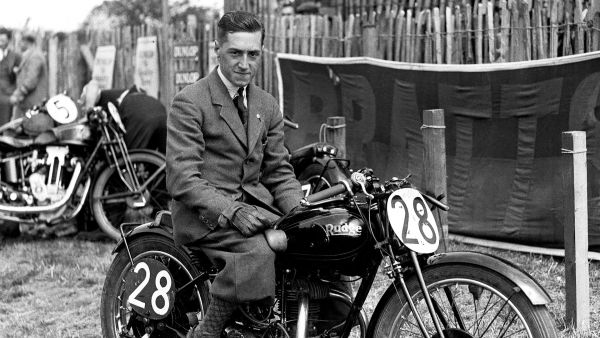 Wal Handley pictured on his Rudge and in his ‘civvies’, 1930

Wal would earn another unwelcome moniker in ‘Unlucky Handley’, but not before serving notice of his skill and courage. Stung into action by the national press, Handley led the first ever Lightweight TT, setting the fastest lap of the race before a broken inlet valve forced the Aston man to park his OK Junior on the second lap.

Returning in 1923, Wal found that his ill luck would only continue, this time leading the same race for three laps before mechanical gremlins again surfaced. Able to finish 8th, Wal was awarded the Nisbet Shield by the ACU Stewards for ‘pluck and endurance’ after suffering a ‘packet of trouble’.

Similar troubles would dog the young Walter for three years; hardly inconceivable when you factor in the attrition rate at the TT during the 1920s. With the rough, narrow and gravel-strewn Mountain Road yet to receive any proper surface dressing, as few as one-in-four riders could expect to see the chequered flag. However, the name ‘Unlucky Handley’ was beginning to stick - no doubt because Wal retired from all his TT races when leading them all.

When Walter Handley did win his first TT race, he did it in true record-breaking fashion. Now riding for Rex-Acme Motorcycles - for which he was a Director - Wal’s first TT victory came in the 1925 Junior TT. Winning at a record speed of 65mph, he also set the fastest lap of the race and lopped a staggering 35 minutes off the previous race time, albeit still spending three and a half hours in the saddle! Handley was so fast, in fact, that only four replicas were awarded among the dozen or so finishers.

Wal’s troubles in the Lightweight continued, but a win in the Ultra-Lightweight - again in 1925 - meant the Aston man was the first rider to win two TT races in a week. A year later, he finished second to Stan Woods in his first Senior TT - the first seven-lap race on the island. Taking full advantage of extensive road improvements, Wal’s third TT win came in 1927, finally adding victory in the Lightweight TT to his palmarès and beating the much-fancied Italians by more than 8 minutes.

Wal’s fourth and final TT win came in 1930 and the rain-soaked Senior TT. A year earlier, Handley had slid off on the first lap at Greeba Bridge in similar conditions. Several riders suffered the same fate, but Wal was unhurt and - giving up his own chances - set about moving the other stricken riders and their machines off the road.

12-months on, Wal would once again stamp his authority on the TT – now a world-class meeting that boasted numerous motorcycling pioneers the calibre of Stan Woods, Jimmy Simpson, Graham Walker, Alec Bennett and Freddie Dixon. Indeed, such was the TT’s standing in 1930, the BBC sent a commentary team to the Island for that year’s Senior TT – the ‘blue riband’ event.

Armed with a works-assisted Rudge, Wal tore into the 1930 Senior TT, taking victory ahead of Graham Walker at a new record speed of 74.24mph. In doing so, Handley completed a ‘full-house’ of TT wins in all solo classes. He also became the first rider to lap the Mountain Course under 30 minutes, the first to do two laps under an hour, and the first to do four laps under two hours. It was also the last time a push rod machine won a TT race. 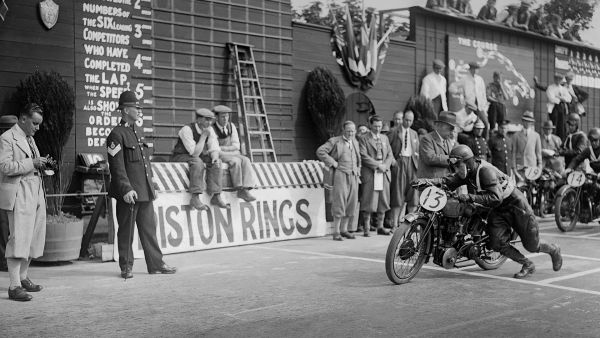 FREDDIE AND THE GOLD STAR

The 1930 Senior TT would prove to be Wal’s last victory on the island, but he raced well into the 1930s with notable success. In this inter-war period, Wal racked up numerous Grand Prix victories home and abroad, claiming the European Championship on three occasions. He also set a string of world records, including the 200-mile world record in all classes, and the prestigious ‘hour record’ for solo 500cc machines – something he achieved on a 350cc Rex-Acme-Blackbourne!

Like many of his fellow ‘derring-do’ competitors, Wal also turned his hand to motor racing, first with MG, then as co-driver to Freddie Dixon. Freddie was something of a TT star in his own right and it was he who introduced the ‘banking sidecar’ to the fabled races. Freddie’s creative and enquiring mind is said to have contributed to the accident that put paid to Handley’s adventures on four wheels, deciding to lock the differential on their Dixon-Riley the night before their next race. It was Wal who suffered the consequences, sustaining serious injuries to his spine and ribs as the car spectacularly summersaulted to a violent stop at Donnington’s hairpin bend.

In 1937, amongst talk of Handley having retired from all competition, Wal gained the Gold Star for BSA by lapping Brooklands race circuit – along with its deteriorating banked track – at a speed of 107mph. Receiving one of the traditional Gold Star badges, Handley’s feat inspired BSA to produce the BSA Gold Star – one of the most famous British motorcycles of all time.

If the world was to witness some great comeback, however, it was not to be. The storm clouds had been gathering over Europe for some time. Death was abroad.

FLYING TO A STOP

Handley’s actions at Greeba Bridge during that 1929 Senior TT - not his comical start in 2022 - showed more of the man Wal was. When war came, he threw himself into service of his fellow man once more, putting to use his talent and experience as a pilot.

It was uncommon for a non-serviceman to have flying experience, but Wal was a true aviator and, by the time war came, he had clocked up no fewer than 700 flying hours under the instruction of Tommy Rose, who later became famous by gaining the record for flying from London to Cape Town. Volunteering for the Air Transport Auxiliary (ATA), Wal was soon made Commanding Officer at Hawarden in Cheshire – the largest Ferry Pool in the ATA.

Wal died in 1941, aged 39, when the engine of his Bell Airacobra caught fire on take-off from RAF Kirkbride. An eyewitness described the moments that followed, including how Wal tried to side-slip his way towards some nearby woods, hoping to use the tree-tops to slow the aircraft. Wal missed the woods by feet, crashing instead into a field where the plane exploded on impact.

It was Charles Darwin who wrote ‘A man's friendships are one of the best measures of his worth’. It is a viewpoint that has stood the test of time, and when we consider the life of Walter Handley - whose life stretched only from the Boer War to the Second World War - we see not only an extraordinary racer, but an extraordinary man, whose only enemy was said to be himself.

In a life packed with records and firsts, it is fitting that Walter Handley became the first person to be commemorated in two places on the TT Mountain Course. The most famous of these is Handley’s Corner - often shortened to Handley’s - which marks the place Wal had his one and only high-speed crash. Lesser-known to TT fans is a memorial seat, placed at the junction of Alexander Drive, near Quarter Bridge. The inscription reads: