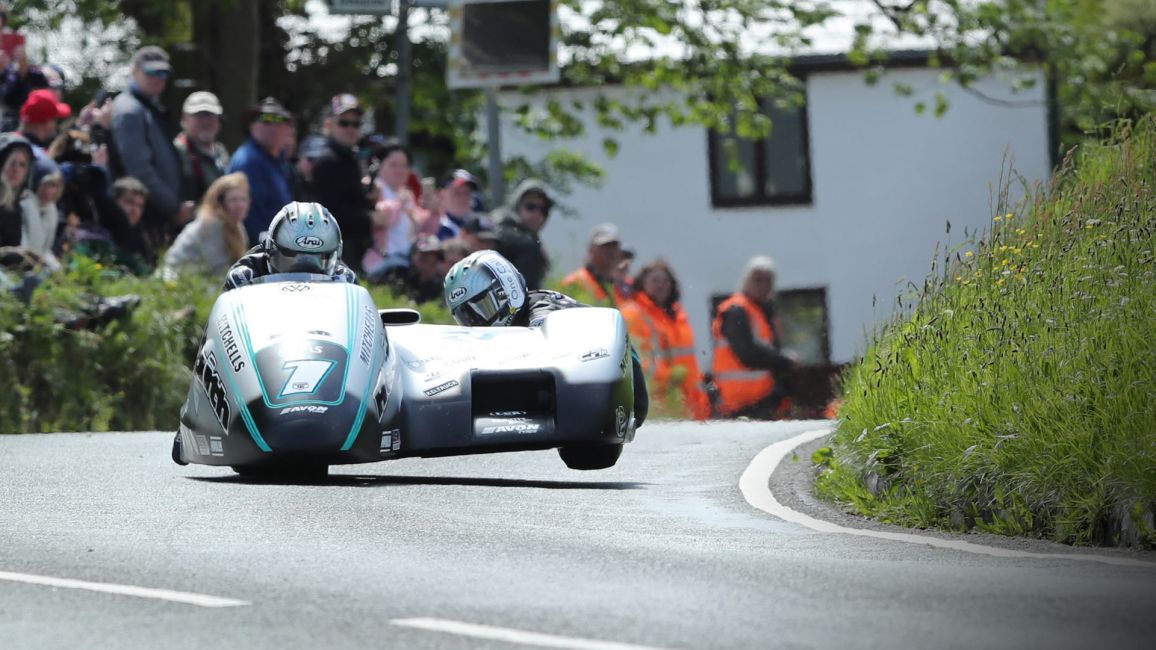 Ben and Tom Birchall took a dominant victory in Monday’s Locate.im Sidecar TT Race at the 2019 Isle of Man TT races, fuelled by Monster Energy, as they swept to victory by 48.116s from John Holden/Lee Cain with Alan Founds/Jake Lowther completing the podium in third.

With a new race record of 57:24.005 (118.317mph), it was the sixth win in a row for the Birchall brothers and ninth in total as Tom became the most successful passenger in TT history bettering the previous best of eight wins he had jointly held with Rick Long and Dan Sayle.

The Birchalls set the pace through Glen Helen on the opening lap with their advantage over Holden/Cain some 4.1s as Pete Founds/Jevan Walmlsey slotted into third a further 5.8s in arrears. They were only 0.362s ahead of Founds/Lowther though as Gary Bryan/Phil Hyde and Lewis Blackstock/Patrick Rosney rounded out the top six.

However, the race saw two big name retirements early on as Tim Reeves and Mark Wilkes only got as far as the Bottom of Bray Hill with Dave Molyneux/Harry Payne not faring much better as they retired at Braddan Bridge.

By Ramsey, the Birchalls had increased their lead and the gap to Holden/Cain was now 8.7s but the battle for third was a lot closer and it was Founds/Lowther who were now in third just 0.588s ahead of Founds/Walmsley, the duo now almost 12 seconds adrift of Holden/Cain. Blackstock/Rosney had moved up to fifth with newcomers Ryan and Callum Crowe running in a brilliant sixth place.

At the head of the field, an opening lap of 117.709mph gave the Birchalls a lead over Holden/Cain of 14.904s who were in turn more than 15 seconds clear of the battle for third that continued to rage. It was Founds/Lowther who continued to hold onto the final podium position though with the gap to Founds/Walmsley having increased slightly to 1.687s.

The big news came in fifth place though as the Crowe brothers lapped at 112.56mph to become the fastest sidecar newcomers ever, bettering the mark of 112.031mph set by Tim Reeves in 2008. Blackstock/Rosney slotted into sixth.

By Glen Helen on lap two, the Birchalls extended their lead further with their advantage over Holden/Cain now at a more than healthy 21.3s whilst Founds/Lowther remained in third albeit almost 18s in arrears. Pete Founds, Crowe and Blackstock continued to occupy fourth to sixth.

Throughout lap two, the Birchalls were on lap record pace and at Ramsey Hairpin they were over seven seconds inside their record from twelve months ago. However, the wind over the Mountain appeared to have slowed their progress although a lap of 119.129mph was only a second outside their outright lap record.

Holden/Cain lapped at 117.01mph to remain in third but Founds/Lowther and Founds/Walmsley both set personal best laps of the Mountain Course as they lapped at 116.22mph and 115.77mph respectively. The gap between the two was now 6.2s and although they remained in fifth, the Crowe brothers went quicker still second time around with a lap of 113.53mph.

On the third and final lap, the Birchalls continued to extend their lead through the timing points and they duly crossed the line at 118.12mph to win from Holden/Cain by 48.116s.

Founds/Lowther took their second TT podium, and first since 2016, as they edged out Founds/Walmsley by just 5.5s, the duo both lapping quicker than the previous lap at 116.37mph and 116.44mph respectively.

Ryan and Callum Crowe took a brilliant fifth place ahead of Blackstock/Rosney as Bryan/Hyde, Conrad Harrison/Andy Winkle, Allan Schofield/Steve Thomas and the father and son pairing of Gary and Daryl Gibson completed the top ten.