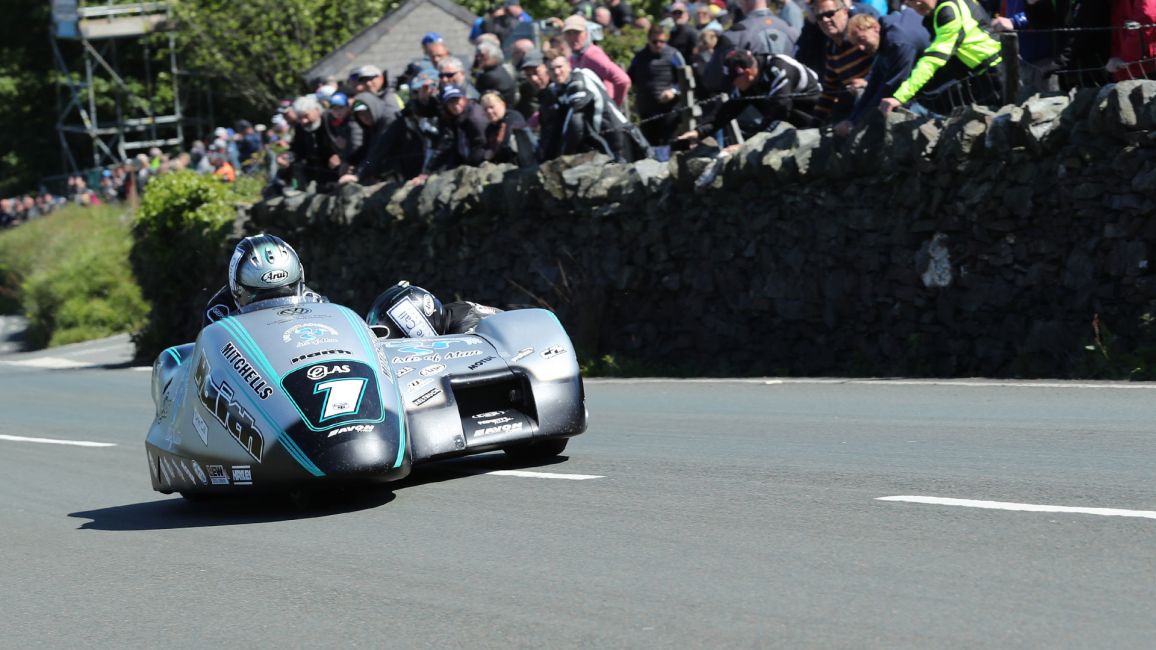 Ben and Tom Birchall matched the ten wins of TT legend Rob Fisher when they took their second victory of the week in the Locate.im Sidecar TT Race at the 2019 Isle of Man TT Races, fuelled by Monster Energy.

In a weather affected fortnight the race was moved forward from Friday’s scheduled start and reduced to 2 laps to complete a packed programme of races.

The Nottinghamshire brothers overcame the early challenge of John Holden/Lee Cain to win by more than twenty seconds with Pete Founds/Jevan Walmsley sealing the final podium position in third.

The Birchalls led Holden/Cain by a second at Glen Helen on the first of the two laps with Alan Founds/Jake Lowther, Founds/Walmsley and Lewis Blackstock/Patrick Rosney slotting into third to fifth. Dave Molyneux/Harry Payne and Tim Reeves/Mark Wilkes both got further than what they had done in the opening race but were back in sixth and seventh respectively.

Founds/Lowther only made it up the hill and were reported to have stopped at Sarah’s Cottage where they were making adjustments while Monday’s sensational newcomers Ryan and Callum Crowe failed to make the start with machine issues but at the head of the field, it was extremely tight as Holden/Cain reduced the deficit by a tenth of a second as they took the jump at Ballaugh Bridge.

Through Ramsey Hairpin first time around, the Birchalls injected a sense of urgency and their lead had increased to 2.757s but with Alan Founds reported as stopped, brother Pete moved up to third albeit over 14 seconds adrift of Holden/Cain. Blackstock/Rosney were now fourth with Molyneux/Payne in fifth and Reeves/Wilkes up to sixth.

An opening lap of 118.38mph saw the Birchalls extend their lead over Holden/Cain to 10.602s while Founds/Lowther remained in third albeit now thirty seconds behind the leaders. Blackstock/Rosney, Molyneux/Payne and Reeves/Wilkes continued to occupy fourth to sixth.

The lead had stretched to 13 seconds at Glen Helen second time around and Holden/Cain were also extending their advantage over Founds/Walmsley, the gap now up to 24.636s. Blackstock/Rosney continued to hold on to fourth but they pulled into the car park by the commentary point to make adjustments before rejoining the race.

Former race winners Molyneux and Reeves were now split by only 0.2s as they circulated in fifth and sixth but by Ramsey for the second and final time, the Birchalls were almost 17s clear of Holden/Cain and with a lap speed of 118.609mph, they took their second win of the week, and tenth in total, by a commanding 20.511s.

Holden/Cain had to settle for second once more, the Blackburn driver’s 12th podium in a row, with Founds/Walmsley finishing in third and taking their first podium since 2016. Reeves/Wilkes came through to take fourth ahead of Gary Bryan/Phil Hyde with Estelle Leblond/Franck Claeys finishing in a fine sixth place after another 110mph+ lap for the French female driver.

Passenger Julie Grosset-Bourbange was reported to have come out of the sidecar at Rhencullen and sustained an arm injury.