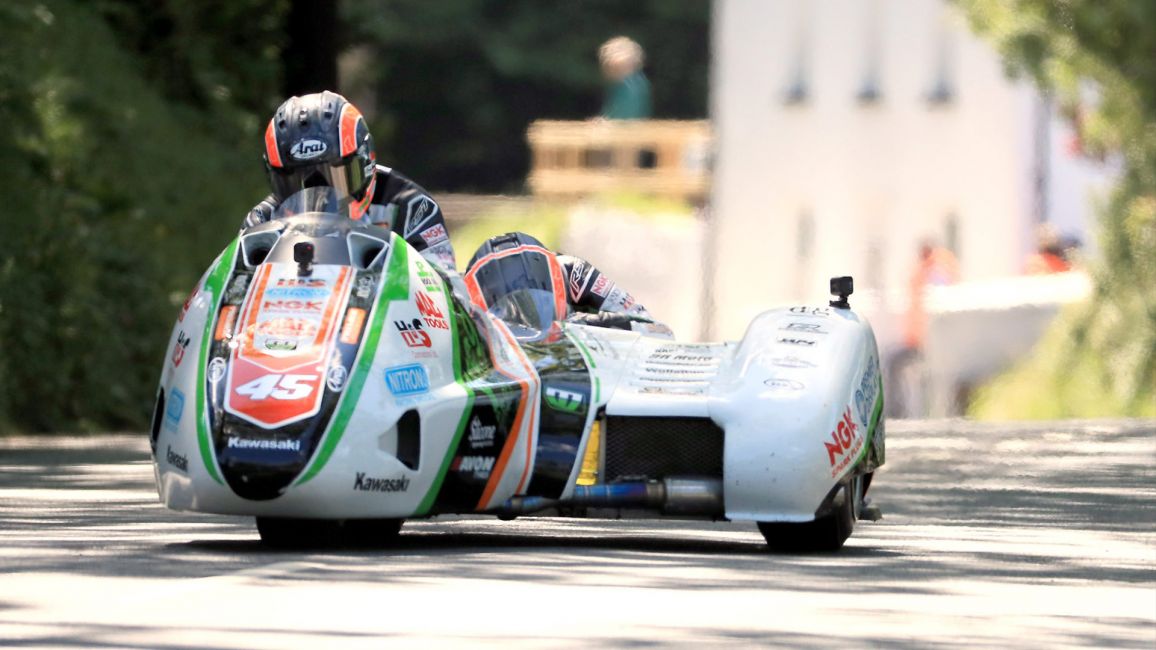 Maria Costello MBE made history by becoming the first female competitor to compete in both the Sidecar and Lightweight TT Races on the same day at the 2019 Isle of Man TT Races fuelled by Monster Energy.

The Northamptonshire racer has been competing on two wheels at the Isle of Man for over 20 years and has achieved great success including a Classic TT podium in 2016, but it was only in recent years when she started racing a sidecar and set herself the challenge of doing both at the most demanding Road Race in the world.

Terrible weather disrupted the event like never before, leaving all competitors with dramatically reduced practice and with time running out, the organisers were forced to run five races in one day.

Costello and her sidecar passenger Julie Canipa had already finished their first full distance Locate.im Sidecar TT Race in a hugely encouraging 21st place, lapping at an average speed of over 100mph on every lap, with a best of over 102mph, which was an impressive result considering they had only done four practice laps together.

Costello’s final two races were moved to the same day when the Bennetts Lightweight Race was postponed and Friday’s final Sidecar Race was brought forward as organisers scheduled a staggering five races in one day.

Costello and Canipa were out on the Sidecar first and enjoyed the reduced two-lap race as they improved their lap times again with a best of 102.671mph to claim a top 20 finish of 17th place. Race winners Ben and Tom Birchall, matched the ten wins of TT legend Rob Fisher by claiming their second victory of the week.

Later that day, Costello reverted to two wheels to compete in another reduced-distance race, this time taking 24th place on the Coverdale Paton in the Lightweight TT. The race was won by Michael Dunlop - the 50th victory for the Dunlop family at the Isle of Man TT Races.

Costello said: “I’m so happy, it has been an incredible and probably my best ever TT because I got to achieve history by doing something so special, racing both the solo and a sidecar as an all-female team.”

“It’s probably been the hardest TT because the weather was disastrous. We had hardly any practice, so we were even more made up with our achievements, I loved every second on the Sidecar and I can’t thank Julie enough for believing in me and for being a brilliant passenger.”

“My solo race was always going to be compromised with doing a new discipline here at the same time, but the bad weather and lack of practice impacted it further. The Paton is a brilliant race bike but we were still making changes in to the race. I’m excited to get some more testing under my belt before my next outing on it.”

Very few people have ever piloted a Sidecar and ridden a Solo at the TT because the disciplines are so different. Costello has become the first woman to do both not only at the same TT but on the same race day at the same TT - an incredible accomplishment that due to bad weather, was forced to happen, and might never be repeated.