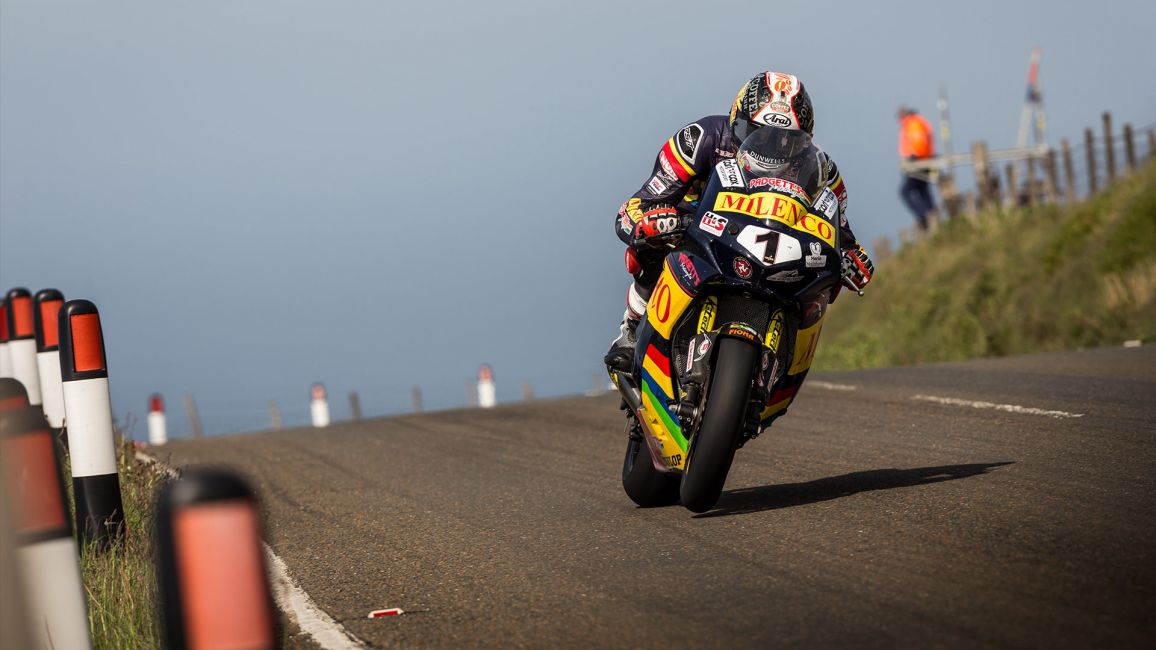 CUMMINS TOPS THE BOARD AS QUALIFYING ACTION FINALLY RESUMES

After four full days of inactivity due to the weather on the Isle of Man, the third solo qualifying session at the 2019 Isle of Man TT races, fuelled by Monster Energy, finally got underway on Sunday afternoon.

The mist on the Mountain cleared sufficiently for the session to take place after a delay of an hour and a half, although there were still damp patches from the earlier rain and strong winds around the course, particularly on the Mountain section.

Conor Cummins on the Milenco by Padgetts Motorcycles Honda set the quickest lap of the session, clocking 128.92mph  although Peter Hickman posted the fastest opening four sectors of the session – indeed the week – on his Superstock machine before slowing over the final two sectors.

Lee Johnston (Ashcourt Racing BMW) and Ian Hutchinson (Honda Racing) were both out on their Superbikes while James Hillier headed down Glencrutchery Road on the Quattro Plant Wicked Coatings Superstock Kawasaki.

Harrison was the quickest to Glen Helen, by four and a half seconds, from Michael Dunlop (Tyco BMW) with Hickman half a second further back in third. Cummins was close behind in fourth with Jamie Coward and Rutter completing the top six as Hillier and Johnson topped the early Superstock and Supersport times respectively.

Cummins set the quickest sector time on the run to Ballaugh before Hickman had the honour of getting from Ballaugh to Ramsey the quickest but as they completed the opening lap, Harrison was initially the quickest overall with a lap of 126.53mph.

That was nine seconds quicker than Rutter (125.42) with Hickman slotting into third at 125.04mph as he completed his first lap of TT2019 on his Superbike before pulling straight in to switch to his Superstock BMW.

However, Cummins went to the top of the leaderboard with a lap of 126.54mph, which was a tenth of a second quicker than Harrison. Hillier (124.33) and Johnson (122.59) were the quickest of the Superstock and Supersport machines but 18-time TT Race winner Dunlop was in trouble and he stopped at the Mountain Box.

The second lap saw Cummins and Harrison set near identical times on the run to Ramsey but the Manxman edged it and with an improved speed of 128.92mph on the Milenco by Padgetts Honda, he remained at the top of the Superbike leaderboard.

Hickman was another rider impressing on the second lap and he set the quickest Superstock lap of the session with a speed of 128.50mph.

The big news of the session though came on the third lap as Hickman, still on his Superstock machine, set the fastest sector times on the run to Ramsey but just as it looked like he’d set the first 130mph lap of the week, he lost time between the Bungalow and the Grandstand and cruised across the line at 126.82mph.  His Bungalow to Bungalow time was in excess of 130mph.

He remained quickest in the Superstock class ahead of new second place rider Cummins (127.17) and Gary Johnson (124.97) with Cummins (128.92) and Harrison (128.29) the two quickest riders in the Superbike category. There was a change for third though towards the end of the session as David Johnson pushed Rutter down to fourth after an impressive lap of 128.24mph on the Honda Racing machine.

Rutter, Coward and Hillier completed the top six in the Superbike class and, along with Hickman, were the only other riders above 125mph but Sam West (124.96) wasn’t far behind as McGuinness, Brian McCormack and Phil Crowe posted late laps of 124.72mph, 124.33mph and 124.31mph respectively.

Understandably, most riders focused on the big bikes but Lee Johnston (122.93) moved ahead of long time leader Johnson (122.59) as Coward (121.36) ended the session in third overall.