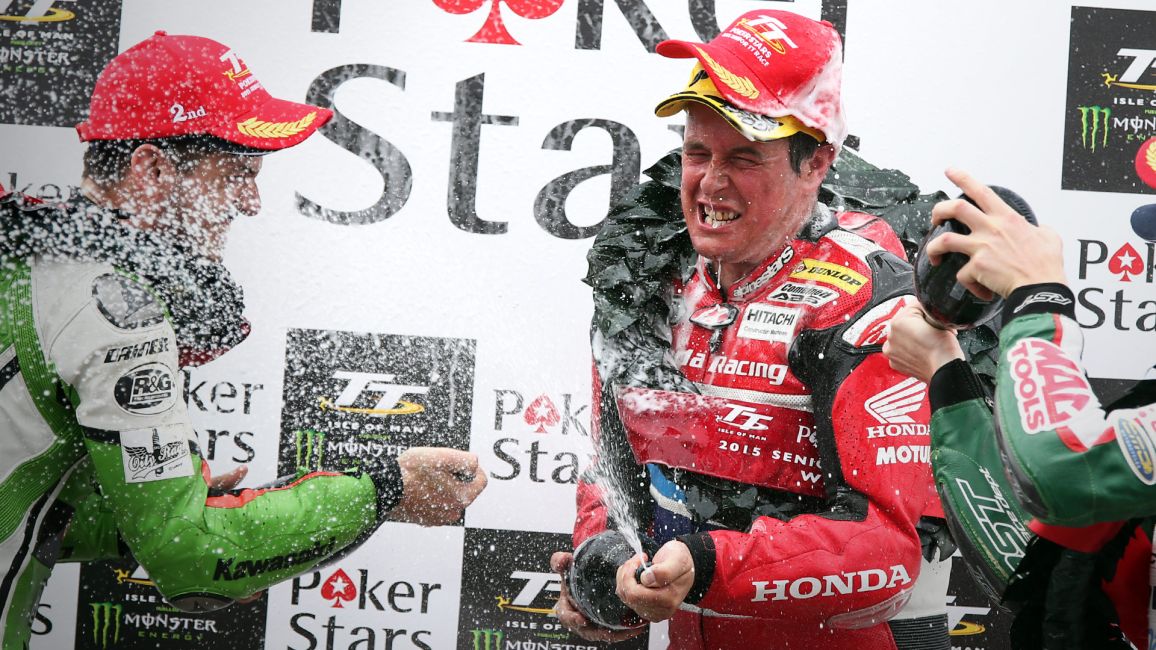 With 189 wins, Honda is comfortably the most successful manufacturer in the history of the Isle of Man TT Races, 65 clear of their nearest rival. And whilst those wins have come from a number of teams and privateer outfits, the majority have come from the official UK-based team.

Indeed, under their various guises over the years of Honda Britain, Honda UK, Honda TT Legends and Honda Racing, the team, which has been based at Louth since 1990, have taken no less than 60 TT race wins making them the most successful team ever.

After making their debut in 1959, Honda enjoyed great success at the TT in the 1960s with, amongst others, World Champions Mike Hailwood, Jim Redman and Luigi Taveri before they officially withdrew at the end of the 1967 season.

It would be 1977 before they returned in an official capacity and when they did, it was with Honda Britain and Gerald Davidson, founding director of the Honda International Racing Company (later HRC), as team manager. They were victorious immediately too with Phil Read winning the inaugural World Formula One Championship Race, a feat repeated in 1979 and 1980 by Alex George and Mick Grant respectively. 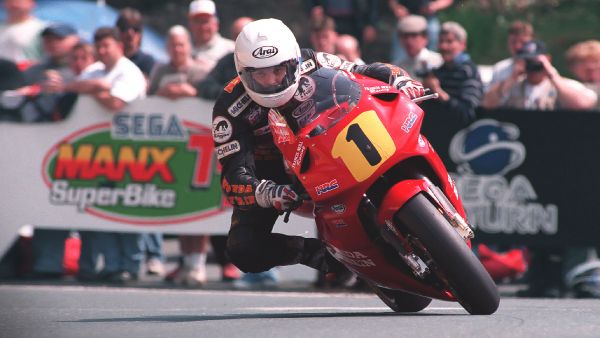 1997: Phillip McCallen, one of many Greats to ride for Honda, on his way to victory in the Senior Race onboard the Honda Britain RC45

Graeme Crosby and Suzuki denied them in 1981 but Honda were back on top in 1982 with Ron Haslam beginning a run of 17 consecutive victories in the F1 class. By this time, Davidson had been succeeded by Barry Symmons as team manager who himself was succeeded by Neil Tuxworth.

Victories during the 1980s and 1990s were taken by illustrious names such as Joey Dunlop, Steve Hislop, Carl Fogarty, Phillip McCallen and Ian Simpson and it’s fair to say that Honda Britain – which also competed as Silkolene Honda and Castrol Honda – dominated ‘big bike’ racing at the TT during these two decades. 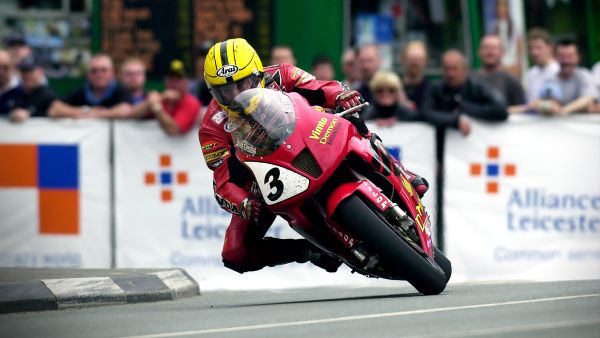 2000: Joey Dunlop's final TT. He won the Formula 1, Lightweight & Ultra Lightweight that year, taking his tally to 26 TT Race wins - 24 of which were with Honda

However, the official team withdrew from TT competition at the beginning of the 2000s to focus on the British Superbike Championship where they ran a full-factory Fireblade with high-profile support from Michelin and HM Plant. For the TT, they supported high-profile privateer teams such as Paul Bird Motorsport and Dave Molyneux Racing instead.

In 2006 though, Honda returned enticing John McGuinness away from Yamaha with whom he’d won three 1000cc races in 2004-05. Honda’s last big bike win at the TT had been Joey Dunlop’s stunning win in the 2000 Formula One Race and they were keen to get back on top. And who better to do that than McGuinness. 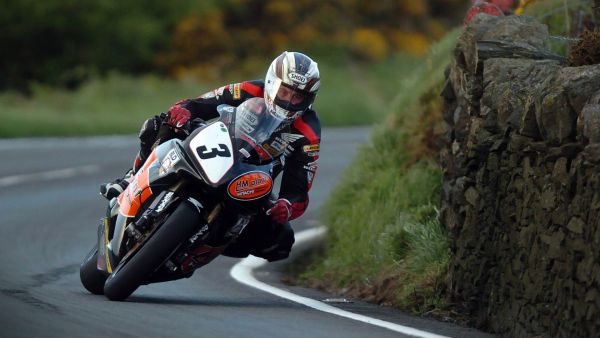 2006: Poached from Yamaha, McGuinness was brought in to lead Honda's official return to the TT on the Fireblade and was immediately successful

The Morecambe rider contested all solo races at the TT in the striking black and orange colour scheme of HM Plant Honda and it was, without doubt, a fairytale return for the brand. McGuinness struck up a good working relationship with mechanics Julian Boland and Leighton Haigh and the combination would reap the rewards for many years ahead.

For the 2007 Centenary TT, the team expanded to two solo riders with Ian Hutchinson joining McGuinness, whilst Dave Molyneux was upgraded to a fully-fledged team-member in the Sidecar class as Honda looked to dominate the 2007 event. 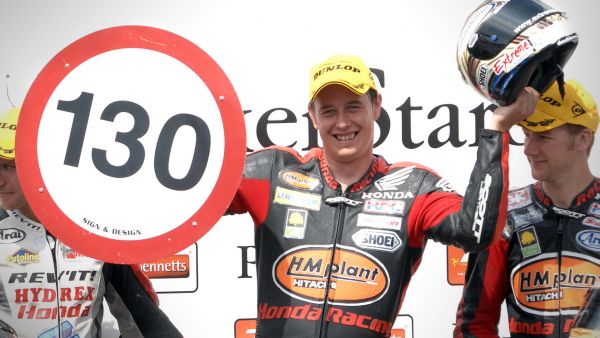 2007: Superbike and Senior victories, plus the first ever 130mph lap of the TT Course

They did exactly that with McGuinness taking record-breaking wins in the Superbike and Senior Races, setting the first ever 130mph lap in the latter. Hutchinson backed him up well with a brace of third-place finishes but he turned the tables in the Supersport Race as he claimed his maiden TT victory with McGuinness in second.

McGuinness also took second in the Superstock Race with Hutchinson again in third and with Molyneux and Rick Long taking both Sidecar Races, Honda had achieved their aim of sweeping everything before them at TT 2007.

Despite of this, they opted out of the 2008 meeting and it was left to Padgetts Racing to run Honda’s main effort, but they were back in 2009 with Steve Plater now alongside McGuinness at HM Plant Honda – the duo contesting the Superbike, Senior and Supersport Races whilst Nick Crowe and Mark Cox were the supported Sidecar team. 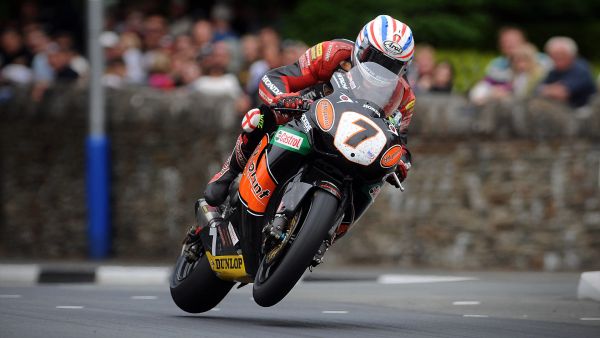 McGuinness duly took another start to finish win in the Superbike Race with new signing Plater making it a 1-2 for the team. Two fourth-place finishes by Plater was the best outcome in the Supersport Races and a new lap record of 131.578mph looked like it would give McGuinness yet another Senior TT win.

However, a broken chain halted his efforts but Plater ensured it was another race win for the team as he claimed his second Mountain Course victory. The week was overshadowed though by the high-speed crash suffered by Crowe and Cox which left them both with serious injuries.

Plater was a non-starter in 2010 after being injured at the North West 200 and he was replaced by Keith Amor but it wasn’t a great week on the Island with Amor’s sixth place in the opening Superbike Race their only result. 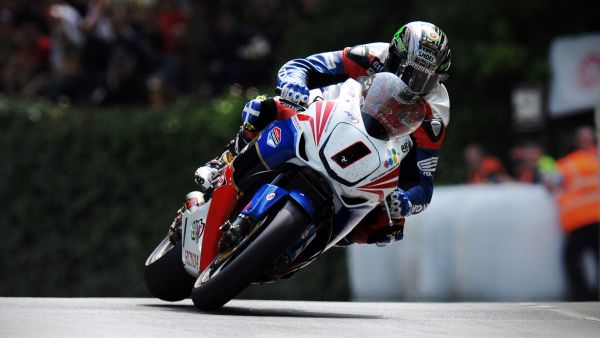 Just the Superbike and Senior Races were contested by the team and there was further change in 2011 with the team re-branded as Honda TT Legends, which also saw them contest the World Endurance Championship.

McGuinness was back to his best with a Superbike-Senior TT double with Amor supporting him well with fourth and fifth place finishes whilst they also took fourth and fifth respectively in the Superstock Race.

The following year saw further changes with Simon Andrews brought in to replace Amor and Gary Johnson riding for the team in the Superstock class. McGuinness took his fifth Superbike Race win for Honda but Andrews crashed at the Les Graham Memorial and missed the remainder of the meeting.

The team reverted back to the Superbike and Senior Races in 2013 but their intentions were clear with McGuinness being joined by not only Michael Dunlop but Michael Rutter too. 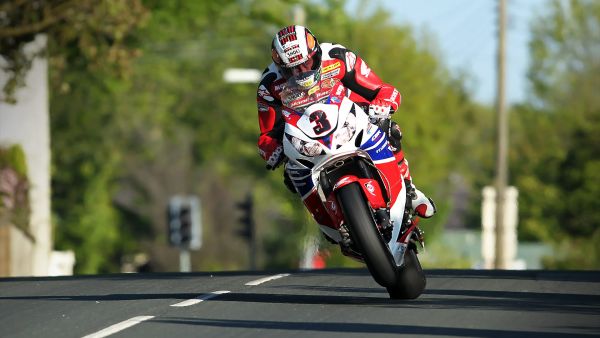 It proved to be an excellent week, as expected, with Dunlop and McGuinness taking first and third in the Superbike Race, where the latter upped his outright lap record to 131.671mph. McGuinness got the verdict in the Senior though where Dunlop took second and with Rutter taking a brace of sixths, the team left the island in high spirits.

The following year saw the team drop the TT Legends title and become Honda Racing but McGuinness’ hopes were thwarted by a wrist injury. However, new signing Conor Cummins took fine second and third places finishes in the Senior and Superbike respectively. 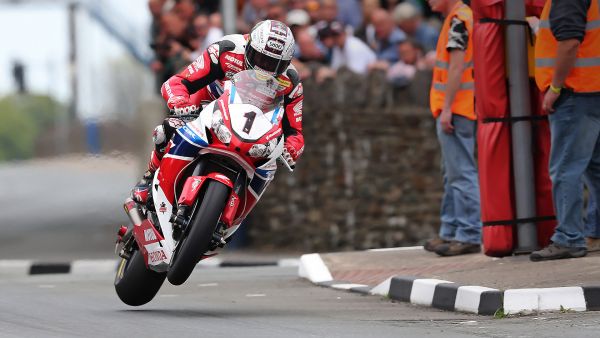 2015: Arguably McGuinness' greatest race. Written off by many given Dunlop's ascendancy and Ian Hutchinson's return from injury, but McGuinness put in a masterful performance to win by 14.2 seconds - his and Honda's last TT win

The Manxman couldn’t add to his podiums in 2015 but after taking fourth in the Superbike Race, McGuinness put in one of his best rides for the team in the Senior Race which he not only won for the fifth time in Honda colours but also reclaimed the outright lap record, which Bruce Anstey had pinched off him in 2014, with a speed of 132.701mph.

That was the team’s 60th TT win and, amazingly, their last, with McGuinness taking a brace of thirds in 2016. He re-signed for Honda Racing for an 11th consecutive year for 2017 with the team campaigning a new Fireblade but a heavy crash in practice at the North West 200 left him with serious injuries and out of racing for almost 18 months.

The team, now being managed by Johnny Twelvetrees, had enticed Guy Martin out of retirement but problems with the bike that had caused McGuinness’ crash also led to Martin coming to grief at Doran’s Bend on the opening lap of the Superbike Race. 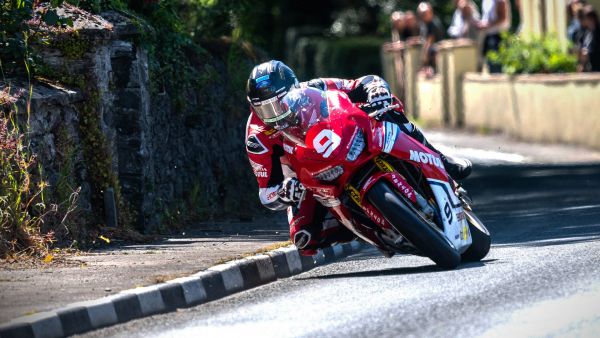 2019: A difficult few years for Honda since the introduction of the 2017 model Fireblade, with David Johnson's Superstock third place the only podium result since

With dark clouds hanging over them, the team withdrew from both the Superstock and Senior Races and it was most certainly their darkest year on the island. Since then, they’ve tried to regroup and had hoped multiple TT winner Ian Hutchinson, who replaced McGuinness for 2018, would bring the glory days back.

Still recovering from injuries, he was unable to do that in either 2018 or 2019 but the latter finally saw them back on the podium when David Johnson took an excellent third place in the Superstock Race.

An all-new Honda Fireblade Superbike and a fresh line-up of Davey Todd and TT newcomer Glenn Irwin signifies a change in direction for the team in 2020 and, with Irwin riding in the British Superbike Championship and Todd contesting the British Superstock Championship under the watchful eye of team manager Havier Beltran, a coordinated assault on both the short circuits and road racing scene is hoped to once again put Honda back on the top step. 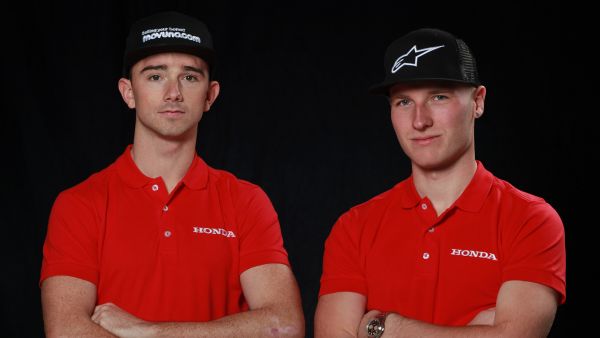