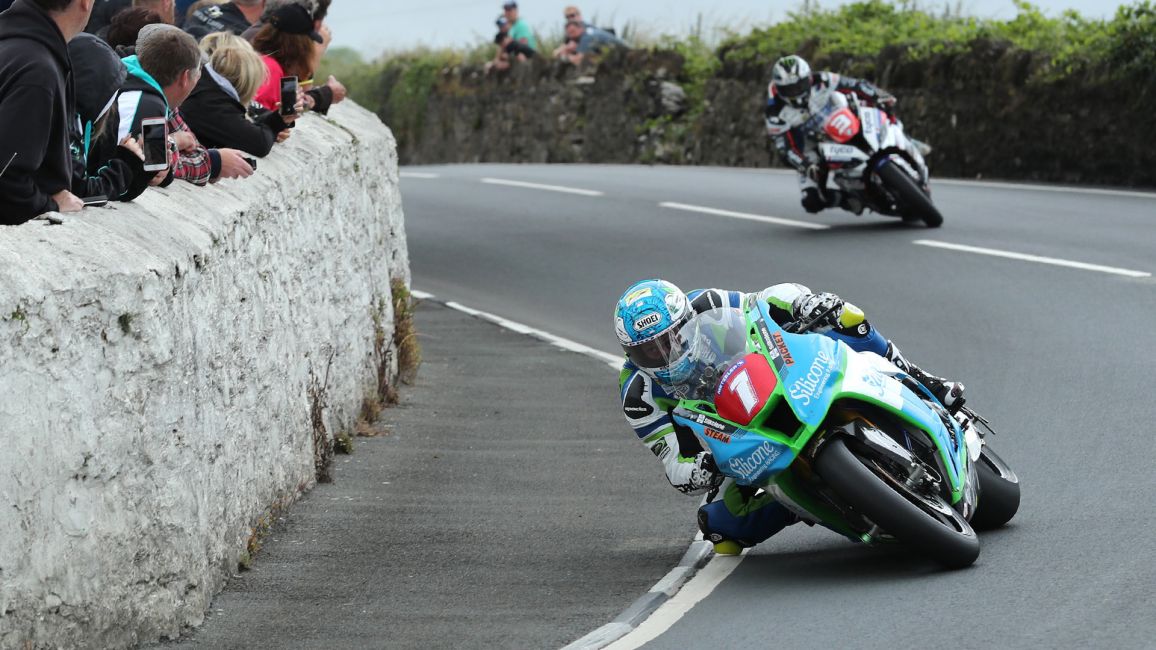 After two wins on the opening night at the Southern 100, Silicone Engineering’s Dean Harrison simply dominated proceedings on Thursday’s main race day as he won no less than four more races including the feature Solo Championship for the third year in a row.

But there was drama with Michael Dunlop’s run of bad luck continuing, as he suffered a massive high-side on the exit of Castletown Corner on the second lap of the opening Senior race. The Tyco BMW ace was conscious, taken to hospital with ‘suspected minor fractures’ and later discharged.

For Dunlop Senior TT winner Harrison though, there were no such problems and he opened his account for the day with victory in the first Supersport race. Like Wednesday evening, it was another closely fought affair as Jamie Coward, none the worse for his spill at Church Bends in the Supertwins race on Wednesday, pushed him all the way.

The PReZ Racing Yamaha rider again set the fastest lap but missed out on the win by just three tenths of a second, the duo comfortably clear of the third-place battle that saw Michael Sweeney come out on top for his maiden Southern 100 podium.

He saw off the close challenges of Michael Evans and Rob Hodson with just half a second covering the trio at the end of the seven laps. Sam West took sixth ahead of Joe Ackroyd, with last year’s Senior Manx GP runner-up Stephen Parsons in eighth. Frenchman Xavier Denis was again the best newcomer in ninth place.

Next up for Harrison was the Senior race which saw Dunlop crash out early whilst giving chase to the flying Kawasaki rider. After Dunlop crashed, Harrison was never troubled as he took win number two on the day and fourth of the meeting by almost 12 seconds from West who, like Sweeney, graced the Southern 100 podium for the first time.

The second Supersport race followed and it again followed a similar pattern to the previous two 600cc encounters with Harrison and Coward enjoying another close battle. The Bradford rider managed to edge away this time with his margin of victory a slightly more comfortable 2.3s.

Sweeney repeated his third-place finish from earlier in the day with Evans again in fourth, ahead of Nathan Harrison and the consistent Ackroyd. West, Hodson, Denis and Parsons filled out the remaining top ten positions.

That just left the nine-lap Solo Championship race and with a fastest lap at an average speed of almost 114mph, no one could stay with the flying Harrison. The 30-year old continually extended his lead on each and every lap before he eventually won by nearly 15 seconds, with Ryan Kneen taking an excellent second place on his BMW.

Kneen just got the better of Hodson, West and Coward, with Sweeney and Ackroyd enjoying an equally good battle and completing their strong week on the island in sixth and seventh. Richard Charlton, Hardisty and Perry took eighth, ninth and tenth respectively.

Meanwhile, the second Supertwins race saw another battle royale between Herbertson and Hodson who, like the night before, were almost inseparable throughout the six laps. Hodson went out on the fifth lap though and that enabled Herbertson to come home almost twenty seconds clear on the Dafabet Devitt Racing machine, with Sweeney taking second and Denis’ excellent debut seeing him take a well deserved third.

It was extremely close though, as he and passenger Mark Wilkes were only half a second clear of 2019 TT podium finishers Alan Founds/Jake Lowther. Indeed, it was a four-outfit battle for the win with Pete Founds/Jevan Walmsley in third and John Holden/Lee Cain in fourth, with just 1.2s covering the quartet at the chequered flag.

The feature Championship race saw drama right at the beginning, as Reeves/Wilkes jumped the start and received a ten second penalty. Whilst they ultimately went out on the final lap, a mistake from Founds/Lowther dropped them down the order.

That paved the way for Founds/Walmlsey to take their first S100 Championship title, but they were made to fight all the way to the end with Holden/Cain crossing the line just a tenth of a second adrift.

Crawford/Hardie took a maiden podium finish in third, with Founds/Lowther recovering in fourth ahead of Harrison/Winkle and regular solo rider Michael Russell who, with Tom Bryant in the chair, had a fine drive into sixth.