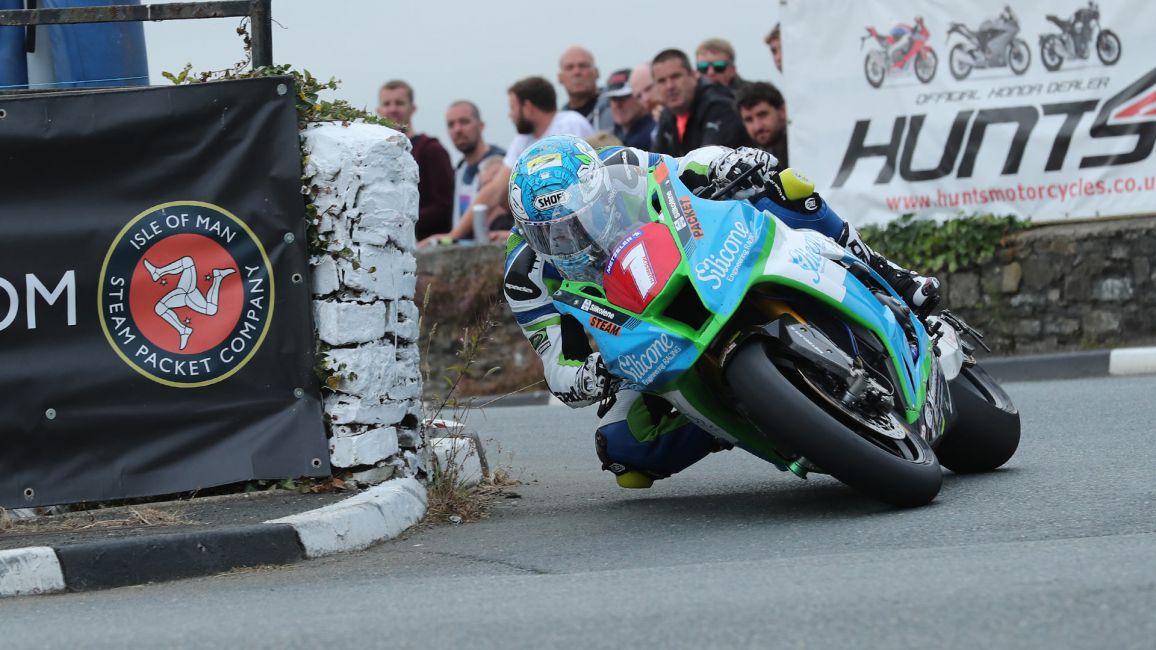 Dunlop Senior TT Race winner, Dean Harrison was in sparkling form on the opening night of racing at the Southern 100, as he took the race wins in the Senior and Supersport categories – the first in comfortable fashion on the Silicone Engineering Kawasaki, the second being a much closer affair.

Harrison opened his account in the Senior race which he dominated and by the end of lap one, his lead over 19-time TT winner Michael Dunlop on the Tyco BMW was almost four seconds. The Bradford rider continually extended his advantage over the course of the seven laps and, aided by the fastest lap of the race at an average speed of 114.019mph, his eventual winning margin was almost 11 seconds.

Dunlop, back in action for the first time since the TT last month, had a slightly sluggish start but once in second place, he was able to pull away from the rest of the field and although he had no answer to Harrison, he pulled comfortably clear of this year’s TT Privateer’s Championship winner, Jamie Coward.

The PreZ Racing Yamaha rider had an equally lonely ride into third but the battle for fourth went all the way to the chequered flag, with former Manx GP winner Rob Hodson (JGH Racing BMW) getting the verdict from local ace Ryan Kneen (Charmers Builders BMW) and Sam West (PRL BMW).

Joe Ackroyd had a fine ride into seventh ahead of Michael Sweeney, Mark Parrett and Dominic Herberston but, having missed the TT due to injury, there was further disappointment for Santon’s Michael Evans who was an early retirement.

Evans had his moment in the 600cc race though, when he finished in a strong third on the Wilcock Consulting Honda, but it was a battle royale between Harrison and Coward throughout the six laps as Dunlop retired early.

Coward led for the first four laps but Harrison nosed ahead for the first time on lap five at Iron Gate, which saw him up the pace considerably, but Coward went with him and going into the final lap there was less than half a second between the two.

Coward set the fastest lap of the race on the final 4.25-miles at 110.304mph, but Harrison prevailed by just 0.416s for his 20th victory around the Billown circuit, whilst Evans just held off expected Manx GP front runner Nathan Harrison.

After finishing second and third in his first two races, Coward looked like he’d get to stand on the top step in the Supertwins race, as he took an early lead but the runner up in this year’s Lightweight TT came off the KTS Racing Kawasaki, fortunately without injury, at Church Bends on the third lap.

That allowed Herbertson and Hodson to dispute the race win and there was nothing between the pairing. But on the dash to the flag, last year’s Locate.im Junior Classic TT winner Herbertson, who was deputising for the injured Paul Jordan on the Dafabet Devitt Racing Kawasaki, got the verdict from Hodson on the second KTS machine.

Jonathan Perry had a great ride into third with Denis doing likewise in fourth, as Dave Moffitt defeated Evans to be the first of the locals home in fifth.

Racing continues today (Thursday), with a 9-race schedule headlined by the Southern 100 Solo Championship Race at 15:30.