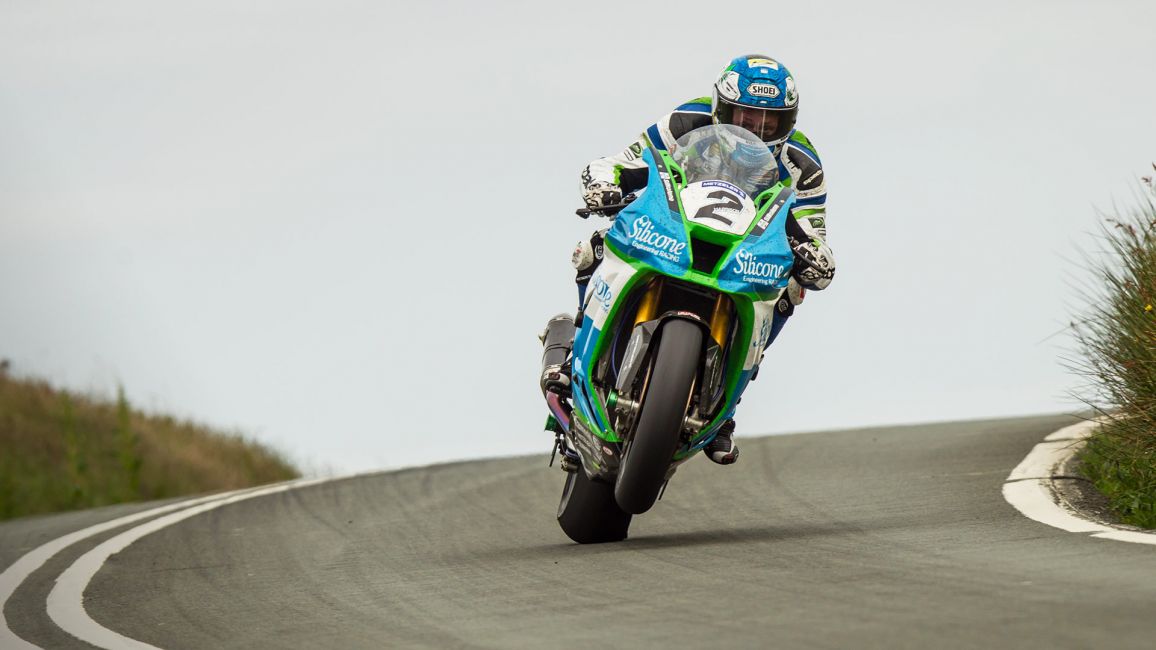 The Smiths Racing BMW rider had opened up a near 18-second lead at two-thirds race distance but he slowed when the bike overheated on the penultimate lap of the Mountain Course which allowed Harrison to sweep through for his third TT victory. Hickman held on for second - 53.062s behind - with Conor Cummins (Milenco by Padgetts Honda) taking third.

With good conditions all around the course, Hickman led from Harrison at Glen Helen first time around but - as expected - it was close with the gap just 0.351s. The duo had already opened up a near six-second advantage over third placed Cummins. Michael Dunlop, Michael Rutter and David Johnson were lying in fourth, fifth and sixth respectively but James Hillier clearly had an issue during the first sector and was down in 21st place.

Harrison nudged ahead at Ballaugh by two tenths of a second but by Ramsey Hickman was back in front albeit by just a tenth of a second. Cummins was now over 11 seconds in arrears and while Dunlop remained in fourth, he was only 0.024s behind the Manxman. Johnson had now overhauled Rutter for fifth with the latter coming under pressure from Davey Todd.

An opening lap of 134.284mph – which proved to be the fastest lap of the race and the meeting - gave Hickman a 2.2s lead over Harrison with Cummins still in third but now over 14s adrift. He only led Dunlop by 0.824s as Johnson maintained fifth but Todd had now moved up to sixth with his first ever 130mph+ lap. Twenty three time TT Race winner John McGuinness retired at the Bungalow while Hillier had clawed his way back up to 11th.

Harrison reduced his deficit to Hickman by four tenths at Glen Helen on the second lap with Cummins pulling away from Dunlop - the gap between the two now more than three seconds. Johnson was ten seconds behind the 19-time TT Race winner in fifth but six seconds clear of sixth placed Todd.

At Ramsey, Hickman had extended his lead to 3.4s and aided by another superb run over the Mountain, a second lap of 134.28mph, which was, amazingly, only 0.022s slower than his first lap, saw the gap stretch to 8.067s. Cummins continued in third although Dunlop closed the gap slightly but Johnson retired at Bedstead which allowed Todd and Rutter to move up to fifth and sixth respectively. It was double disappointment for Honda as Ian Hutchinson retired at the pits.

After the first round of pit stops, Hickman’s lead had grown to ten seconds by the time he got to Glen Helen on the third lap and Cummins had also pulled away from Dunlop in the battle for the final podium spot, the difference now almost 11 seconds. Rutter had closed in on Todd though and they were split by only 1.4s.

By the end of the third lap - half race distance - Hickman had added more time to his advantage and the Burton upon Trent rider’s lead had increased to a formidable looking 13.48s. Cummins was looking safe in third as he now had a healthy gap of almost 16 seconds over Dunlop but although Rutter had got to within a second of Todd at Ramsey, the youngster enjoyed a seven-second gap over his more experienced rival as they headed out onto lap four. Hillier was now running in seventh.

Coming into the second pit stop, Hickman’s lead over Harrison had increased again, up now to 17.6s, after lapping at 133.55mph as Cummins got more and more secure in third. Todd remained in fifth but Hillier was continuing to work his way back up the leaderboard and a near 131mph lap saw him close to within 3.1s of Todd.

The pit stops saw a significant change at the top of the timings though and by Glen Helen on the fifth lap, Harrison had brought the lead down to 7.9s as Hickman went through the first sector over nine seconds slower than his Kawasaki rival. The drama continued and at Ballaugh, Harrison had brought the gap down to just 1.1s with Hickman going through the subsequent Sulby speed trap at just 159mph, 30mph slower than Harrison!

Going through Ramsey for the penultimate time, there was a new race leader as Harrison took the lead for the first time and he now led by almost eight seconds. Hickman was losing seven to eight seconds to Harrison through every sector but although he was now over 18s behind, he continued on to his sixth and final lap.

Harrison pressed on and with an untroubled final lap, he duly took his third TT win by 53.062s but with Hickman’s pace slowing, all eyes fell on whether or not he could hold onto second place. He did it – just – as he held off Cummins by 5.8s.

Dunlop had a comfortable fourth place and it was Hillier who got the verdict over Todd for fifth, the latter setting a personal best lap of 131.49mph on the sixth lap in just his second year at the TT. Michael Rutter, Jamie Coward – who recorded his first 130mph lap – Brian McCormack and Dominic Herbertson completed the top ten.

The race results enabled Hickman to regain the Joey Dunlop TT Championship he last won in 2017 with 111 points, 13 ahead of Harrison (98) with Hillier in third (69). Hickman will receive a Bremont watch from the TT’s Official Timing Partner.

After twice previously finishing second, Coward won the TT Privateer’s Championship with the maximum 125 points after being the top privateer in all five of the races. McCormack (61) finished second with Paul Jordan (58) in third.

Kawasaki won the Manufacturer’s Award with Smiths Racing taking the Team Prize for the third year in a row.