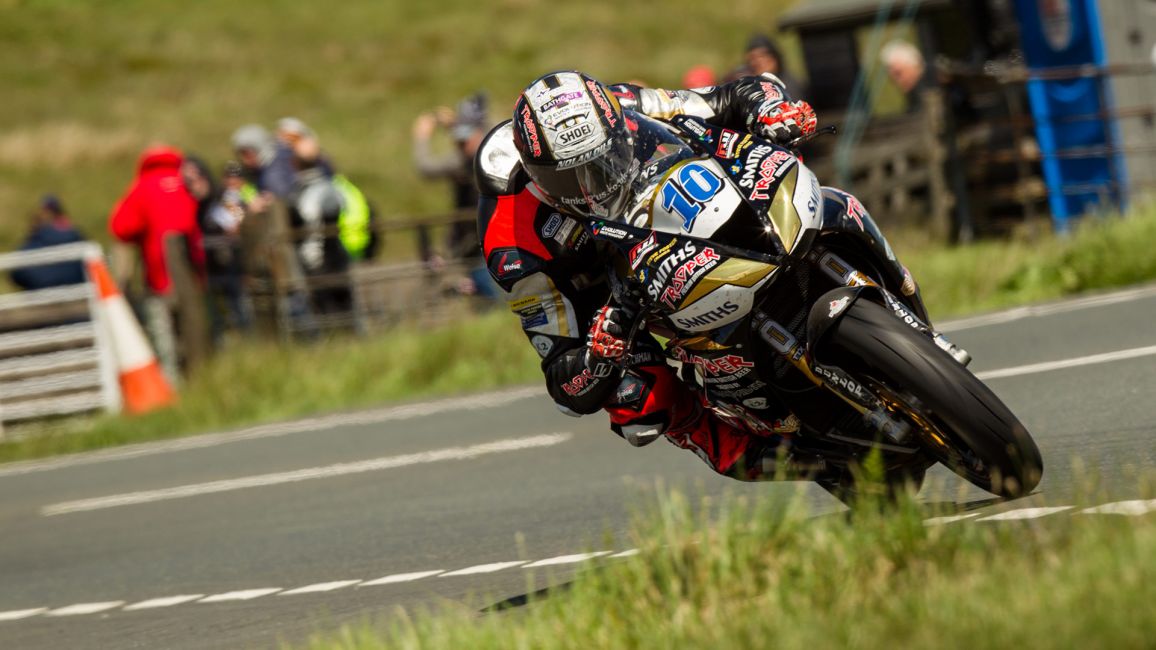 The Trooper Beer by Smiths Racing Triumph rider was locked in battle throughout the two laps with Dean Harrison (Silicone Engineering Kawasaki) but with his now customary charge over the Mountain on lap two, the Burton upon Trent rider edged to a win by 3.3s. James Hillier took third on the Quattro Plant Wicked Coatings Kawasaki.

Having originally been scheduled for 10.45am on Wednesday, the race, cut from four laps to two, eventually got underway at 12.55pm on Thursday and with dry conditions all round the Mountain Course, except for some sight damp patches at Laurel Bank, the Black Dub, Glen Helen, Kerromoar and Ramsey Hairpin, it was Hickman who led at Glen Helen on the opening lap.

However, his lead over Hillier was just 0.06s and it was close across the leaderboard with Harrison, Gary Johnson, Lee Johnston and Jamie Coward filling third to sixth place positions as just two and a half seconds covered the top six. Ian Hutchinson was in trouble though with the Honda Racing rider retiring at Quarter Bridge.

It was all change at Ballaugh as Harrison took over the lead from Hillier and Hickman with the trio separated by only half a second but by Ramsey Hickman moved back to the top of the leaderboard. The gap was only 0.038s as Hillier dropped back to third, one and a half seconds adrift of Harrison.

The trio remained close as they went up and over the Mountain for the first time but an opening lap of 127.21mph gave Hickman a 2.3s lead over Harrison with Hillier just under a second further back in third. Conor Cummins and Coward had moved up to fourth and fifth as Johnston slipped back to sixth.

With no pit stop on this occasion, the riders went on to their second and final lap but Harrison’s strength on the opening sector could again be seen as he turned his deficit into a half second advantage as the riders swept round the left hander at Glen Helen. It looked to be a two-horse race as well as Hillier was now three seconds in arrears of Hickman.

By Ballaugh, Hickman had edged ahead again but it remained extremely tight with Harrison only three tenths of a second behind. Hillier dropped another second but stayed in third over six seconds clear of Cummins as Coward and Johnson completed the top six.

As they arrived at Ramsey for the final time, the gap, amazingly, was almost exactly the same and, just like last year’s Senior race, it was all going to come down to the final run over the Mountain.

Through the Bungalow, Hickman had added another six tenths of a second to his lead and he’d increased it to 1.9s at Cronk ny Mona. Indeed, with the fastest lap of the race, 128.14mph, Hickman clinched victory by 3.302s for his first Supersport TT win.

Harrison had to settle for second with Hillier taking another 600cc podium in third as Cummins finished in a safe fourth. Coward took his best ever TT result in fifth ahead of Dunlop with Davey Todd also having his best ever TT finish in seventh. Gary Johnson, Lee Johnston and David Johnson rounded out the top ten.

Hickman’s victory saw him extend his lead at the top of the Joey Dunlop TT Championship to 13 points and he now leads the way on 66 from Harrison (53) and Hillier (49).

Coward took his third successive maximum haul of points in the race for the TT Privateers Championship and he’s moved onto 75 points ahead of Derek Sheils (47) and Paul Jordan (45) who took 12th and 11th respectively in today’s race.

Matt Stevenson was reported to be off at Greeba Castle and was treated at the scene for a wrist injury.