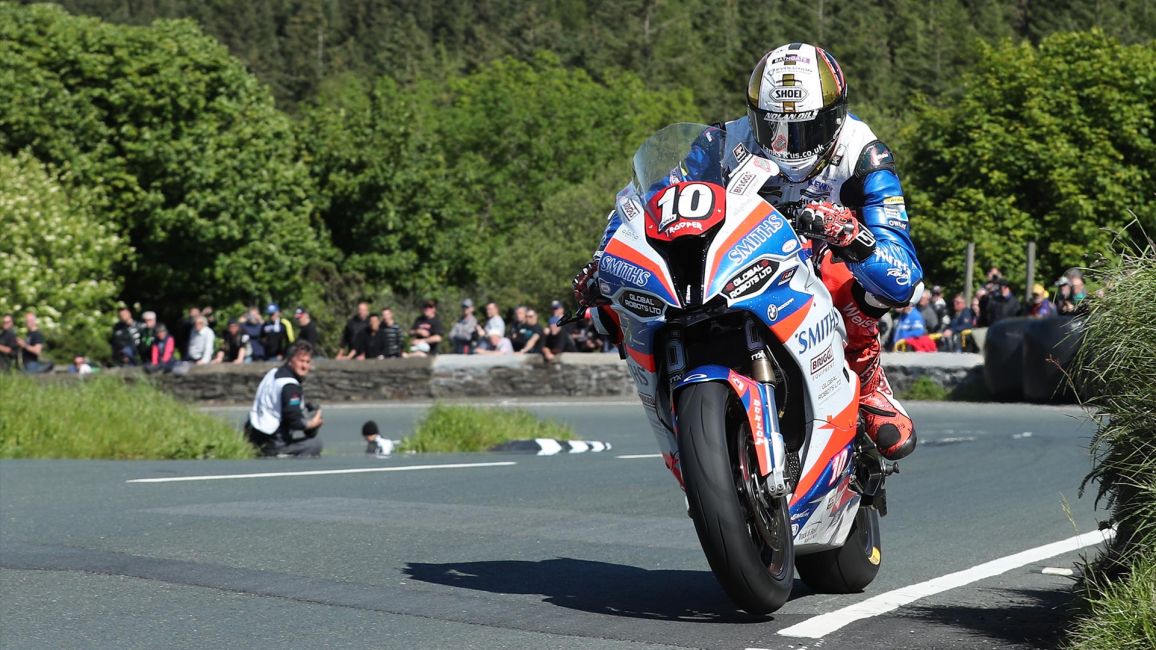 Peter Hickman joined a select group of riders to win two races in a day at the Isle of Man TT Races, fuelled by Monster Energy, when he dominated the RL360 Superstock race to win by 26.045s from Dean Harrison (Silicone Engineering Kawasaki).

The Smiths Racing BMW rider followed up his Monster Energy Supersport success from earlier in the day to take his fifth TT victory – and his third of the week - with David Johnson (Honda Racing) taking his maiden TT podium in third as he got the better of Michael Dunlop on the final lap by just 0.208s.

A superb first sector saw Hickman lead through Glen Helen on the opening lap, - 1.68s ahead of Harrison with James Hillier a similar distance back in third. Dunlop slotted into fourth ahead of Michael Rutter and Davey Todd who was having a storming ride in sixth.

Hickman increased his lead by a further seven tenths of a second at Ballaugh, while Dunlop moved ahead of Hillier for third. At Ramsey Hairpin the Burton upon Trent rider’s advantage had grown to 3.978s. Harrison was now almost five seconds clear of Dunlop with Hillier, Conor Cummins and Johnson occupying fourth to sixth positions.

A brilliant run over the Mountain and an opening lap of 132.02mph gave Hickman a 9.026s lead over Harrison as the riders all made their mandatory pit stop. Dunlop was just over four seconds behind Harrison but 6.7s ahead of Hillier although the Kawasaki rider picked up a 30s pit lane speeding penalty which dropped him down the order. Johnson was now in fifth having overhauled Cummins.

Hickman’s lead at Glen Helen had come down to 5.8s as Harrison made his bid to close the gap and it looked like it was now a two-horse race with Dunlop over eleven seconds in arrears in third. Johnson had moved up to fourth, courtesy of a superb pit stop, from Cummins and Rutter as Hillier went through in ninth.

As the lap unfolded, Hickman began to reassert his authority back on the race once more and the lead was up to nine seconds at Ramsey with Dunlop having lost a further three seconds on the west part of the circuit. Indeed, he was now coming under pressure from a charging Johnson on the Honda Racing machine.

Hickman’s second lap speed of 128.13mph gave him a healthy lead of 16.576s over Harrison as he headed into his third and final lap of the 37.73-mile course. Dunlop was now only 3.2s ahead of Johnson as Cummins and Rutter slotted into fifth and sixth. Hillier had fought his way back up to seventh.

At Glen Helen third time around, Hickman had extended his advantage over Harrison to 18.078s but Johnson had now moved up to third at the expense of Dunlop, although the gap between the pairing was only 0.784s.. Cummins and Rutter remained in fifth and sixth respectively but the battle for third was getting closer with Dunlop having closed to within 0.114s at Ballaugh.

Throughout the final lap, Hickman continually pressed home his advantage and with a final lap speed of 131.38mph, he took the chequered flag by 26.045s to move on to a career total of five TT wins.

Harrison took his second runner-up spot of the day, and third of the week, with Johnson getting the better of Dunlop for third by 0.208s as he overhauled the Ulsterman in the final sector. Cummins and Rutter took fifth and sixth with Hillier, Todd, Jamie Coward and Gary Johnson completing the top ten.

Dean Osborne was reported to be unhurt after coming off at Appledene.