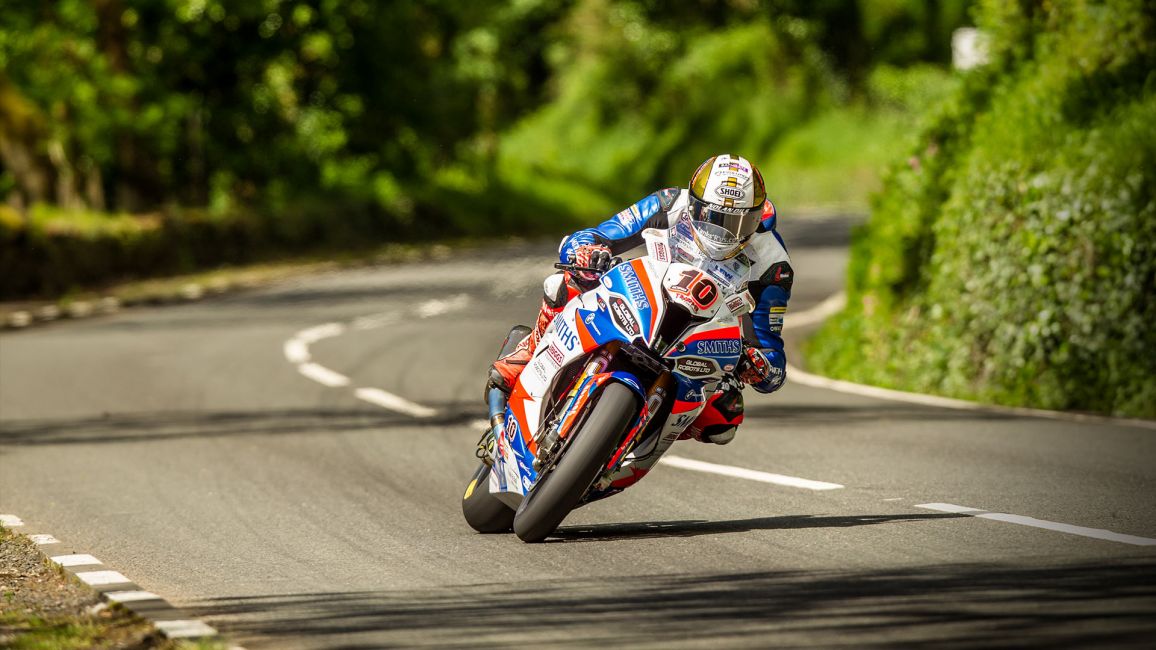 Peter Hickman took victory at the opening race of the 2019 Isle of Man TT races fuelled by Monster Energy when he won a shortened RST Superbike race on the Smiths Racing BMW by 1.782s from Dean Harrison (Silicone Engineering Kawasaki) with Conor Cummins completing the podium in third on the Milenco by Padgetts Motorcycles Honda.

After the weather affected the race programme earlier in the week, the race was scheduled to be held over a reduced four laps but an incident at Snugborough on the third lap brought out the red flag just as the leaders were passing through Glen Helen on the third lap with the result subsequently declared at the end of the second lap.

After a slight delay of twenty minutes, the race got underway at 11.05am with good, dry conditions reported all around the Mountain Course although the competitors would again have to contend with winds of 25-30mph.

Harrison led at Glen Helen on the opening lap - his advantage over Hickman just 1.1s - with James Hillier a further second back in third. Cummins was only a tenth of a second behind the Kawasaki man as Michael Dunlop and Michael Rutter completed the top six. Three of the fancied runners - John McGuinness, Lee Johnston and Ian Hutchinson - were down the order though in 14th, 15th and 16th respectively.

The gap between Harrison and Hickman remained the same at Ballaugh as Cummins moved up to third and by Ramsey Hairpin, it was still close with Harrison’s lead just 1.4s. Cummins was now 3.8s adrift of Hickman but almost eight seconds clear of Hillier.

An opening lap of 132.48mph gave Harrison a lead over Hickman of just one second with Cummins still in third but now 4.8s behind the BMW rider. They were the only three riders to lap at more than 130mph with Hillier, Dunlop and Rutter continuing to fill fourth to sixth places. McGuinness pulled into the pits though with an oil pressure issue whilst Derek McGee also retired.

Harrison eked out another half second on the run to Glen Helen as he and Hickman remained neck and neck and although Cummins still sat in third place, he was now over eight seconds behind the race leader. Hillier still occupied fourth but Rutter had now overhauled Dunlop for fifth.

A superb sector between Glen Helen and Ballaugh enabled Harrison to increase his lead to 4.8s with Cummins a similar distance behind in third. By the time they reached Ramsey for the second time, Harrison led on the road with his advantage cut back slightly by Hickman to four seconds. Manxman Cummins was now 6.3s behind Hickman.

However, Hickman utilised his prowess over the Mountain and although he was still in second place at the Bungalow, he was now only 0.045s behind Harrison. Cummins was leading on the road again as well but by the end of the lap, the Burton upon Trent rider was ahead for the first time, his second lap of 132.947mph giving him a gap of 1.7s over Harrison.

Hillier broke the 130mph barrier to maintain his hold on fourth and he was now almost 13 seconds ahead of Rutter with Dunlop still in sixth. Jamie Coward was up to seventh with David Johnson, Gary Johnson and Davey Todd rounding out the top ten.

After the single pit stop, Hickman still led but through Glen Helen for the third time, the gap had come down again to 0.690s with Cummins a further ten and a half seconds back in third. There was change in fourth though as Hillier dropped back to seventh and fourth to sixth was now Rutter, Dunlop and David Johnson.

However, the red flag came out shortly afterwards with the result declared at the end of lap two giving Hickman his third victory around the Mountain Course with Harrison and Cummins completing the podium positions.

Hillier was awarded fourth ahead of Rutter and Dunlop with David Johnson, Coward, Gary Johnson and Todd completing the top ten.