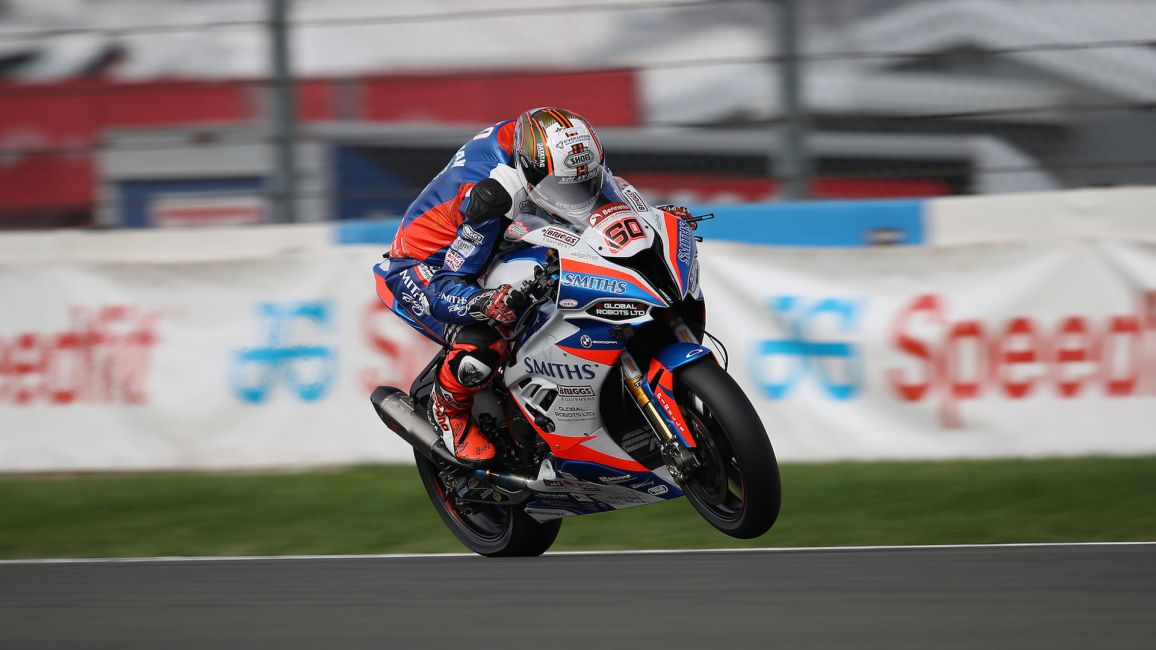 HIGHS & LOWS FOR HICKMAN AT DONINGTON

Outright TT lap record holder Peter Hickman endured a mixed weekend at Donington Park in the penultimate round of the British Superbike Championship when he rode to a strong fourth place in the first race, but was forced out of race two with a mechanical issue.

The weekend started with mixed conditions for free practice on Friday but qualifying on Saturday was run in dry conditions, with Hickman qualifying the Smiths Racing BMW S1000RR in eighth place for Sunday’s first 20-lap race.

The damp weather predicted for race day stayed away and the 2.5-mile Grand Prix circuit was completely dry for the opening race. At the end of the first lap, Hickman had moved up to sixth place and although he briefly dropped back to seventh, he quickly regrouped and moved back up to fifth where he battled with Christian Iddon and Josh Brookes for third place and the final podium position. With just five laps to go, Iddon dropped back allowing Hickman to take a comfortable fourth place, some 3-seconds off the podium.

A fast lap time set in race one meant that the 5-time TT race winner would start the second race from the second row in fifth position. An early period of the race was spent behind the safety car and upon the resumption of racing, Hickman was maintaining his position in fifth. However, lap 13 proved to be unlucky for the 32-year old as a broken chain brought his race to an abrupt end just as another strong finish looked to be on the cards.

Peter Hickman: “Results-wise, it’s been a bit of a mixed weekend but, overall, our pace has been strong throughout. We’ve made more improvements to the bike which has helped us get closer to the front group. In the first race, I made a slight mistake early on when the bike went into neutral at the Melbourne Loop, but I regained the lost places pretty quickly although I didn’t quite have the pace to get onto the podium. Race two was going equally as well and although I had a few slides after the safety car had gone in, the lap times were good, and I felt strong in fifth. I was hanging on a bit to the front group but then the chain snapped which was unusual to say the least but it’s just one of those things and nothing the team could have done so we’ll look to end the season strongly with three strong rides at Brands Hatch."

Darren Jones, Team Co-ordinator: “It’s been another learning weekend and we’ve changed the bike a lot, some changes which have improved things but highlighted weaknesses in others and given us some work to do. The results have been a bit mixed, but we’re really pleased with Peter’s pace and performances and only a technical issue – our first of the year in any race – cost him two top five finishes.”

With three races at the final round at Brands Hatch on October 18-20 and 75 points on offer, Hickman will be looking to end his season on a high and challenge for 4th place in the championship standings.