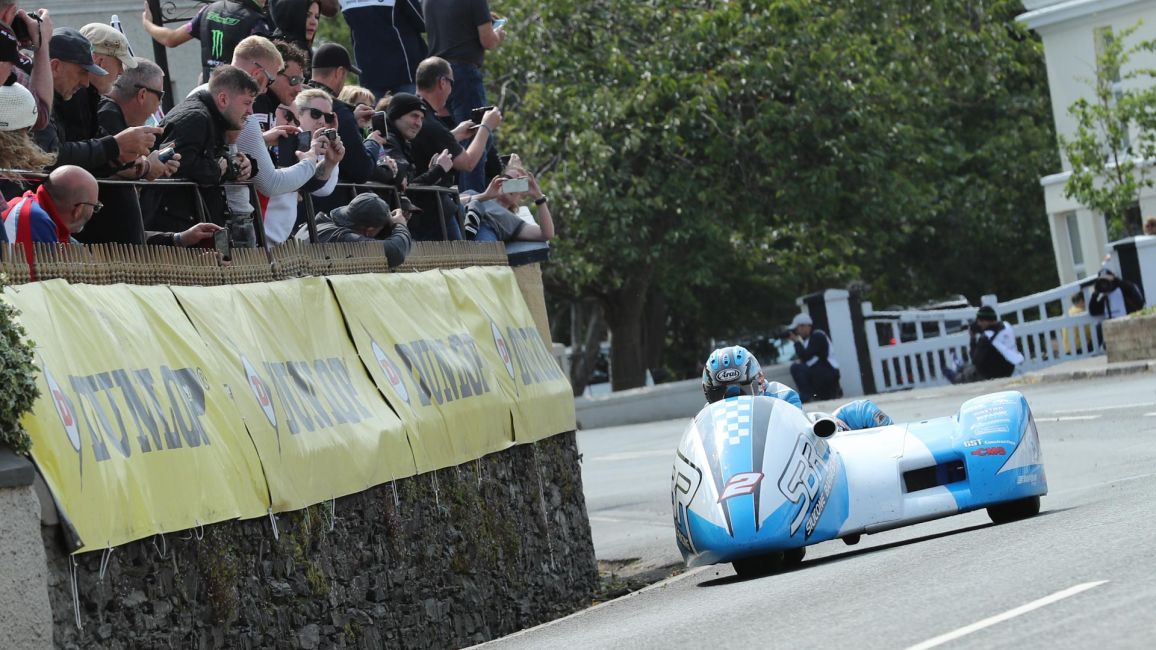 After four full days of inactivity due to the weather on the Isle of Man, the second qualifying session for sidecars at the 2019 Isle of Man TT races, fuelled by Monster Energy, finally got underway on Sunday afternoon.

After four full days of inactivity due to the weather on the Isle of Man, the second qualifying session for sidecars at the 2019 Isle of Man TT races, fuelled by Monster Energy, finally got underway on Sunday afternoon.

The mist on the Mountain cleared sufficiently for the session to take place after a delay of an hour and a half, although there were still damp patches from the earlier rain and strong winds around the course, particularly on the Mountain section.

With bright skies and sunshine at the Grandstand, the Formula Two Sidecars were first to take to the Mountain Course with Ben and Tom Birchall leading the field away, closely followed by Holden/Cain, Tim Reeves/Mark Wilkes, Pete Founds/Jevan Walmsley, Lewis Blackstock/Patrick Rosney and Dave Molyneux/Harry Payne.

Holden/Cain were the quickest to Glen Helen, three seconds quicker than the Birchalls, but newcomers Ryan and Callum Crowe, who set a stunning 109mph lap in their opening lap on Tuesday night, stopped early at Snugborough and although they made adjustments, they were unable to continue. Two of the favourites were also in trouble with Reeves/Wilkes and Blackstock/Rosney retiring at Churchtown and Sulby Bridge respectively.

Holden/Cain continued to set the pace on the Silicone Barnes Racing Honda, overtaking the Birchalls on the road, and they were first to complete the lap with a speed of 114.99mph, which was almost identical to their lap from Tuesday evening.

The Birchalls lapped nearly twenty seconds slower at 113.19mph with Founds/Walmsley on 111.80mph. Founds/Lowther went fourth quickest with a lap of 110.49mph followed by Molyneux/Payne at 109.43mph.

Allan Schofield/Steve Thomas slotted into sixth on the leaderboard with a lap of 107.77mph with Gary Bryan/Phil Hyde and former race winners Conrad Harrison/Andy Winkle also lapping in excess of 107mph.

Second time around it was the Birchalls who were in the ascendancy and with three of the quickest sector times they increased their pace to 114.93mph. Holden/Cain were slightly slower than their opening lap with a speed of 114.30mph but Founds/Walmsley lapped quicker at 113.36mph. Harrison/Winkle (108.24) and Estelle Leblond/Franck Claeys (106.96) also upped their speeds but Molyneux’s second lap was a more sedate 104.22mph.