Michael Dunlop claimed his 20th win at the Isle of Man TT Races on Monday morning with a new lap record of 129.475mph enabling him to get the better of Dean Harrison in the Monster Energy Supersport Race 1.

There was little to choose between Dunlop on his MD Racing Yamaha and Harrison (DAO Racing Kawasaki) throughout the three laps, the gap between the two at one stage was a mere one tenth of a second, but the Northern Irishman edged away on the final lap to become just the third rider after Uncle Joey and John McGuinness to win 20 TT races. 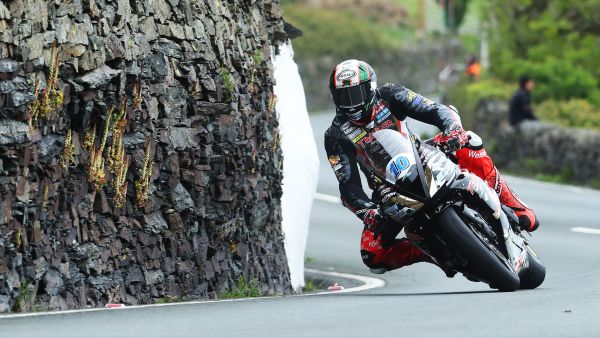 HICKMAN BATTLES WITH JOHNSTON FOR THIRD PLACE ON THE PODIUM

Through Glen Helen on the opening lap, nine miles into the course, and it was Dunlop who led Johnston by half a second with Harrison just a tenth of a second further back. Hickman slotted into fourth, 0.7 seconds behind Harrison, and it was Hillier and Conor Cummins (Milenco by Padgett’s Motorcycles) who rounded out the early top six as less than ten seconds covered the top ten.

Dunlop had extended his lead by the time he jumped Ballaugh Bridge and as he rounded Ramsey Hairpin, where a number of damp patches remained after overnight rain, the gap had crept out to 2.5 seconds. It was now Harrison in second place with his advantage over good friend Johnston a slender 1.2 seconds. It was getting close for third though as Hickman was now less than a second adrift of Johnston. Hillier and Cummins were holding station in fifth and sixth.

All riders made their mandatory pit stop at the end of the opening lap and a speed of 126.92mph meant Dunlop continued to lead – Harrison had reduced it to 1.8 seconds at the Bungalow but Dunlop responded and at the Grandstand, it was back up to 3.2 seconds. Johnston was only 1.5 seconds behind Harrison and he, in turn, had eked out a gap of 2.1 seconds over Hickman. Hillier and Cummins were still in fifth and sixth with Coward giving chase in seventh. 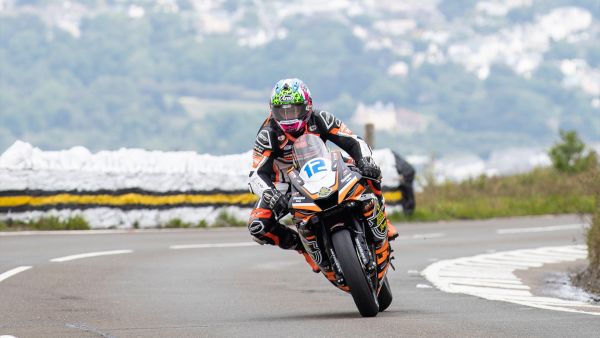 COWARD CONTINUED ON THE TALE OF MANXMAN CONNOR CUMMINS

Paul Jordan was going well in tenth with James Hind 13th, Michal Dokoupil 14th and Mike Browne 15th but Jordan was then hit with a penalty for speeding in pit lane.

As always, the pit stops had an effect on the positions and although Dunlop still led at Glen Helen, the gap over Harrison was back down to 1.6 seconds. Hickman and Hillier had both moved up a place to third and fourth respectively and it was Johnston who suffered most as he slipped back to fifth.

Harrison was doing all he could and at Ballaugh, he’d managed to reduce Dunlop’s advantage to less than a second but Dunlop responded and added another half second to his lead as he rounded Ramsey Hairpin for the second time. They were more than 11 seconds clear of third which was now occupied by Hillier with the Yamaha man having overhauled Hickman to the tune of 1.2 seconds.

The gap between the leading two riders remained the same at the Bungalow and as they started their third and final lap it was only 1.2seconds. The battle for third was even tighter with just a tenth of a second between Hillier and Hickman! Johnston and Cummins were holding onto fifth and sixth but Coward was closing in on the latter and was only 2.8 seconds adrift. 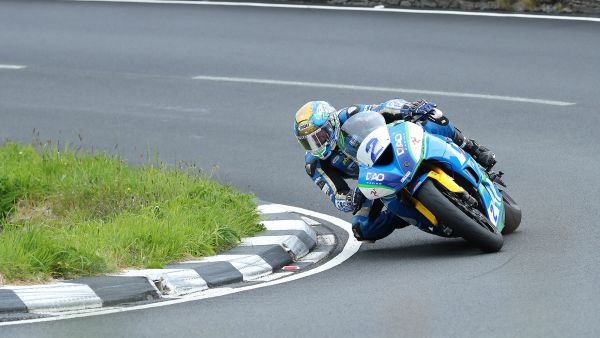 The race was now essentially a one-lap shootout and at Glen Helen it was down to a miniscule 0.14s, Dunlop continuing to hold sway – Hickman was back up to third though, having turned his deficit to Hillier into a 2.4 seconds advantage.

Dunlop added two tenths of a second to his lead over Harrison as he leapt Ballaugh Bridge and the race for third was now a three-rider battle with less than six seconds covering Hickman, Hillier and Johnston. Coward had also cut the gap to Cummins to 0.4s in the battle for sixth.

All eyes were on Dunlop and Harrison though and the Ulsterman had stretched his lead to 2.6s at Ramsey having had the better run through the bumps after Ginger Hall so could he hold on as he made the Mountain climb for the last time?

The answer was yes and a final lap speed of 129.475mph, a new lap record, enabled him to get the win by 5.6s, and it was Hickman who prevailed for the final podium position, 3.5 seconds ahead of Johnston with Hillier having to settle for fifth.

Coward got the better of Cummins for sixth to continue his good start to this year’s TT and it was Cummins, Davey Todd, Dominic Herbertston and Ian Hutchinson who completed the top ten. Jordan took 11th with James Hind having a great ride into 12th ahead of Rob Hodson, Michael Sweeney and Mike Browne.

WATCH LIVE AND ON-DEMAND ON TT+