HICKMAN'S THIRD WIN OF THE WEEK

Peter Hickman claimed his third win of the 2022 Isle of Man TT Races fuelled by Monster Energy, and his eighth in total after taking victory in Wednesday afternoon’s Bennetts Supertwin TT Race, his first ever victory in the class.

Riding the VAS Engine Racing Paton, Hickman had been locked into battle with the similarly mounted Michael Dunlop for the first two laps but when the Ulsterman went out a third of the way into the final lap, he had a clear run to the end eventually winning by a clear 1 minute 40 seconds from Lee Johnston (Ashcourt Racing) with Paul Jordan (PreZ Racing by Prosper2) taking his first ever TT podium in third. 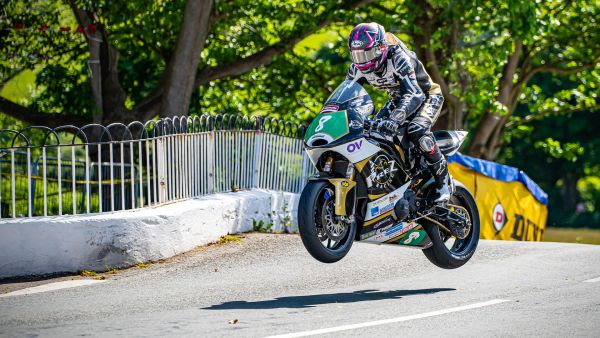 With bright sunshine at the Grandstand but damp patches remaining in the north of the Island, particularly Kerromoar, Glen Duff and the Ramsey Hairpin after heavy overnight rain, Dunlop led through Glen Helen on the opening lap with Hickman just 0.8 seconds behind.

Jamie Coward (KTS Racing powered by Steadplan) was only a further 0.9 seconds adrift and they were followed by a flying James Hind (Team ILR/Mark Coverdale), Johnston and Frenchman Pierre Yves Bian on the second VAS Engine Racing Paton.

Taking the jump at Ballaugh Bridge for the first time, Hickman had turned his deficit into a 0.8 second advantage and the two Patons had opened up a 5.2 second gap over Coward, who in turn had opened up a similar distance to Hind. Johnston and Bian remained in fifth and sixth but Gary Johnson (Dafabet Racing) was out having retired at the famous landmark.

At Ramsey Hairpin, Dunlop had cut Hickman’s lead down to half a second and it looked to be a two-horse race with Coward now 8.2 seconds in arrears. He was more than 11 seconds clear of Hind though with the latter coming under pressure from Johnston with just 1.3 seconds covering the two riders.

Dunlop edged ahead at the Bungalow by just 0.08 seconds and an opening lap of 120.303mph meant he led Hickman by 0.6 seconds as the riders made their mandatory pit stop at the end of lap one. Coward was now 13.7 seconds further back in third with Johnston having overhauled Hind for fourth and Bian holding station in a good sixth. Jordan, Rob Hodson, Michael Rutter and Stefano Bonetti occupied seventh to tenth. 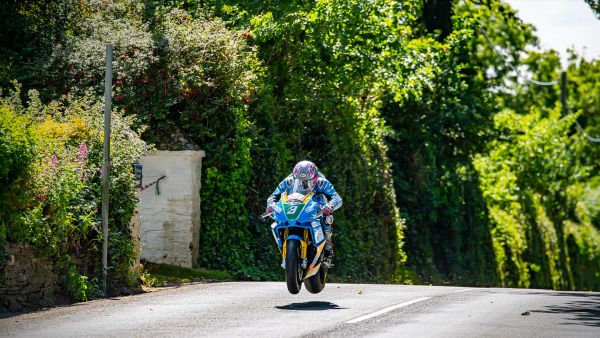 Coward had the quickest pit stops of the leading contenders at 29.7 seconds but whilst he continued to lead on the road, he was still in third at Glen Helen on lap two and he was now 16.9s behind second placed Dunlop with Hickman back in front albeit by only 0.8 seconds . Further back, Bian had overtaken Hind to move up into fifth.

As the lap progressed, there remained nothing between Hickman and Dunlop and the latter led at Ballaugh by the tiny margin of 0.04 seconds, a gap that had stretched at Ramsey Hairpin but only up to 0.8 seconds. That was halved when both riders crossed the tramlines at the Bungalow for the second time.

However, Coward was out with the Kawasaki having expired just after the 11th Milestone and that promoted Johnston into third and the final podium position – albeit almost a minute behind the race leader – with Bian, Jordan and Hind now the running order behind him.

Back at the front and as the riders flashed along Glencrutchery Road to start their final lap, there’d been yet another leader change with Hickman back ahead of Dunlop, the gap between the two still only half a second. Johnston was now 1 minutes 10 seconds behind Dunlop but the Aprilia man was in a safe third being more than 20 seconds ahead of Bian. Jordan moved up to fifth and had closed to within 3.8 seconds of the Frenchman.

Drama soon came though with Dunlop slowing through Laurel Bank and Hickman’s lead at Glen Helen was a whopping 57 seconds, the Englishman having overtaken his rival on the road. Johnston and Bian were still in third and fourth but now had Dunlop firmly in their sights, on time at least. 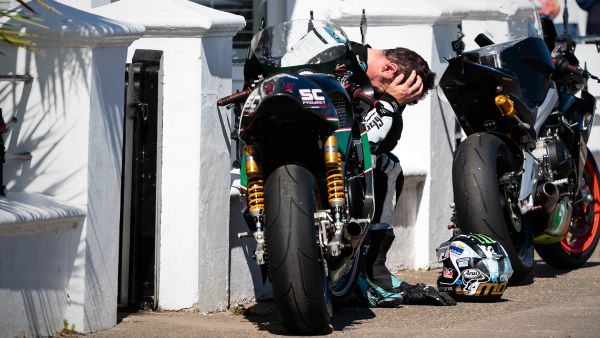 DESPAIR FOR DUNLOP, RETIRING FROM A CLOSE BATTLE WITH HICKMAN

Dunlop was then reported to have stopped to make adjustments only to be black flagged and whilst Hickman had a huge lead over Johnston, third place was still anyone’s with just a handful of seconds covering Bian, Jordan, Hind, Hodson and Rutter.

Hickman had no issues going up and down the Mountain for the final time and, with the fastest lap of the race, 121.293mph, cruised to his third win of the week, taking the chequered flag 1 minute 49 seconds clear of Johnston. A delighted Jordan took the third position from Ramsey, holding on until the end for a debut TT podium finish.

Fourth was still a superb result for Bian in his first TT and Rutter and Hodson followed him home with Hind, Dominic Herbertson, Michael Evans and Xavier Denis completing the top ten. For the latter two, it was their best ever TT results.