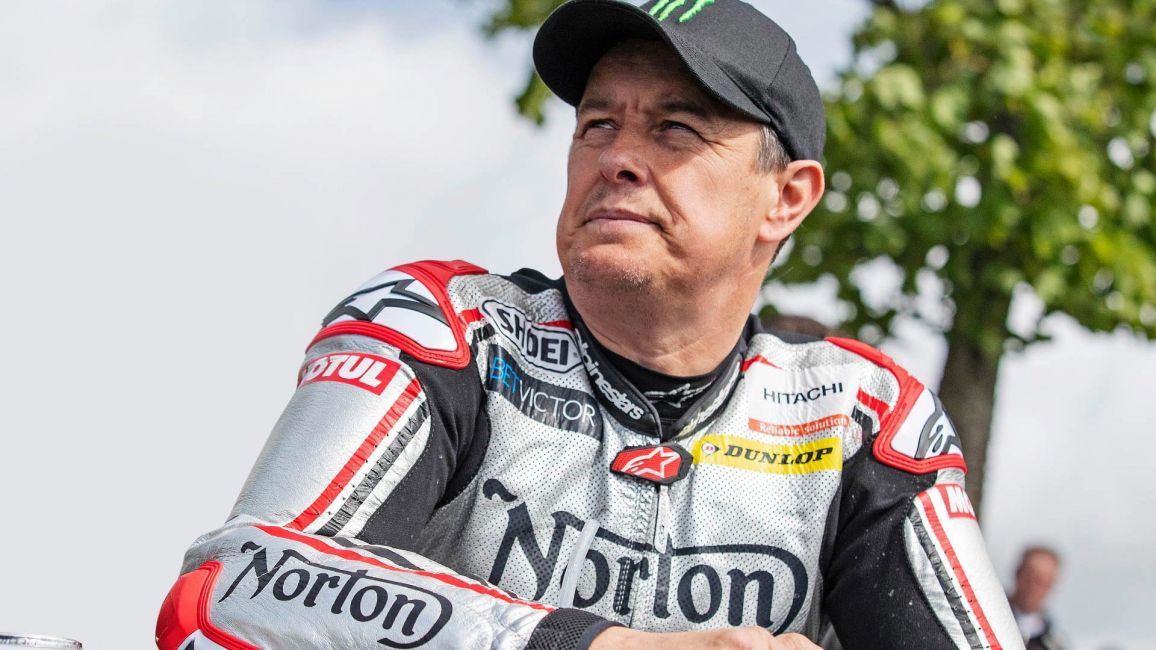 MCGUINNESS YET TO CONFIRM PLANS FOR NEXT YEAR

23-time TT Race winner John McGuinness has yet to confirm who he will ride for and what he will ride for the 2020 season as he remains under contract with Norton, but enjoyed a successful outing on the Paul Bird Motorsport Ducati V4R at the Macau Grand Prix in November.

Speaking alongside Michael Rutter and Steve Plater at Motorcycle Live 2019, McGuinness remained tight-lipped but said his plans for next year’s road racing season were still to be confirmed.

“I can’t really say too much at the minute, I’m still under contract with Norton so I’ve got to get around the table with them to see if we’re going to go forward with that or not” he said.

McGuinness sensationally signed with the British-marque for the 2018 season but was forced to pull out of that year’s TT at the eleventh hour after re-breaking the leg he originally broke in a career-threatening incident at the North West 200 in 2017.

With a further 12 months of rehabilitation, McGuinness and Norton made their TT debut together at the 2019 Isle of Man TT Races but a weather disrupted fortnight compounded technical issues and he retired the Norton SG7 from both the RST Superbike and Dunlop Senior Races and didn’t complete the Bennetts Lightweight Race on the new Norton Superlight.

It’s unclear whether Norton will return to the TT in 2020 having always stated that racing around the 37.73-mile TT Course was a means of developing a road bike to go on sale to the public. With this task now complete and the Norton V4RR road bike now in production, Norton have yet to announce whether they will line up on the TT start line next year.

While there is uncertainty over whether Norton will race in 2019, McGuinness was full of praise for the Ducati V4R that he rode in Macau and that dominated this year’s British Superbike Championship.

McGuinness said: “The V4 Ducati was sensational, I really really enjoyed it. I didn’t really know what to expect, I was a bit nervous as they were big shoes to fill with it being the [British] Championship winning bike! It would have been nice to do a little test with it but the first time I rode it was straight out of the pit lane at Macau, but I gelled with the bike straight away.”

“[Paul Bird Motorsport] run a great team with a great atmosphere and the bike was just awesome apart from in the race where it let me down!”

When pressed about riding it at the TT he said, “It’s funny, every single bike I ride I always think ‘what would it be like around the Isle of Man?’ and I would be confident to go down Bray Hill tomorrow on that Ducati, that’s for sure. I don’t know, it looks right! It’s got wings on it! I don’t know if that’s good or bad for the TT but I’d be confident to ride it.”

While Ducati have been out of favour at the TT for some years, McGuinness has experience with the Italian brand. The then 31-year old took a second and third place finish in the 2003 Senior and Formula 1 TT Races whilst riding the MonsterMob Ducati 998 for the same Paul Bird Motorsport team he rode the Ducati V4R for in Macau.