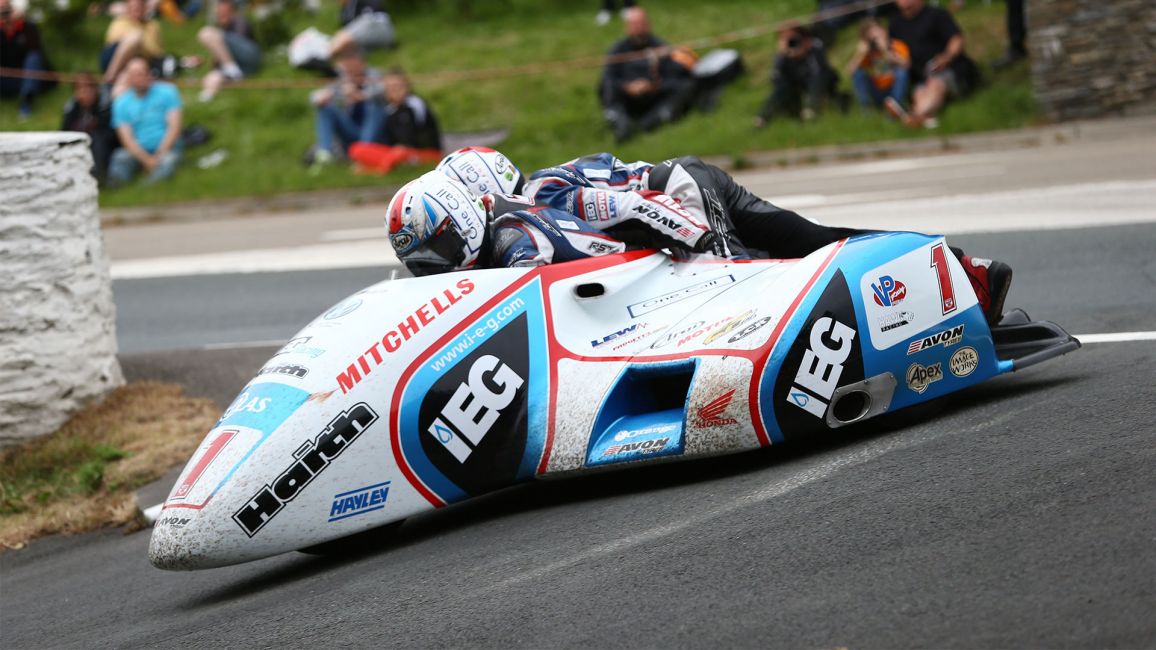 The entry for the two Locate.im Sidecar encounters at the 2019 Isle of Man TT Races fuelled by Monster Energy will again see the world’s best drivers and passengers do battle on the Mountain Course. With almost 50 entries having been accepted, the competition in each of the three lap affairs will certainly be fierce.

This year sees five former race winners in the field, with no less than 29 victories between them, whilst 13 of them have already lapped the Mountain Course at more than 110mph. There’s strength in depth throughout the field and although only the top ten drivers are seeded, no less than thirty of them have already lapped at more than 105mph, further indication of the quality that will be lining up on Glencrutchery Road Start Line in June.

Having won the last five TT Sidecar Races and being the current lap record holders, Ben and Tom Birchall are undoubtedly the team to beat. The Nottinghamshire brothers took a resounding double victory last year where they also beat their own lap record, upping it to 119.250mph. With a total of eight wins now under their belts, it’ll take a brave man to bet against the current World Champions who will again lead the field away at number 1.

John Holden and Lee Cain of the Silicone Barnes Racing Team have been the nearest rivals to the Birchalls in recent years, taking the runners-up spot in each of the last five races. Last year they lapped at an impressive 117.878mph to become the second fastest Sidecar team of all time. Holden was the last driver other than the Birchalls to win a Sidecar TT Race, taking victory in the opening race of 2016. Starting at number 2 once more, he’ll be looking to take his third TT win and Cain to his first.

Moving up the order to number 3 from number 5 last year are Tim Reeves and Mark Wilkes. The Kent duo excelled in 2018 with a brace of third place finishes and a new fastest lap averaging 117.729mph around the TT Course – almost 3mph quicker than they had gone before. With this being their third TT together, they’ll be hoping to progress even further and take the challenge to the Birchalls.

Starting at number 4 for a second successive year are Alan Founds and Jake Lowther. The pair took fourth and fifth finishes last year and are one of only six crews to lap the TT Course at an average speed in excess of 115mph.

Ten seconds later at number 5 is Alan Founds elder brother Pete. He and passenger Jevan Walmsley continue together for the fourth successive year. The pair have three top six finishes to their names in the last three years and, having taken a brilliant second place three years ago, will be looking to get back onto the podium this time around.

Seeded riders for the first time, Lewis Blackstock and Patrick Rosney start at number 6. With fourth and fifth place finishes in the last two years and a best lap at an average speed near 114mph, the Lancashire pairing will be confident of improving further and grabbing their first TT podium in 2019.

17-time winner Dave Molyneux and new passenger Harry Payne will start a little further down the field, with bike number 7. 2019 marks 30 years since Molyneux took his first victory in 1989 – three years before Payne was born! After more than two decades of making his own chassis, Molyneux will use the favoured LCR chassis at the TT for the first time as he bids to get back to winning ways. Payne is with him for the first time after an encouraging debut last year, when he lapped at more than 109mph with another Manxman, Michael Jackson.

Number 8 for 2019 will be the evergreen pairing of Conrad Harrison and Andy Winkle. The Bradford driver is the fifth former winner on the entry, with father and son duo Steve and Matty Ramsden next to follow them away at number 9.

The seeded drivers are completed at number 10 by Gary Bryan and Phil Hyde. The pairing finished seventh and ninth last June when they lapped at close to an average speed of 112mph.

The starting order for the rest of the field will be determined by their fastest laps set during practice week. Amongst them is Estelle Leblond, who became the first – and only – female sidecar driver to lap the 37.73-mile circuit at an average speed in excess of 110mph, on her way to ninth place in last year’s second race. Darren Hope and Paul Bumfrey, Gary and Daryl Gibson, Wayne Lockey and Mark Sayers, Gary Knight and Daniel Evanson, and the returning Rob Handcock/Ken Edwards all feature in a strong Sidecar line up for TT 2019.

Local man Michael Jackson will line up for his second TT with Sarah Stokoe in the chair, whilst the overseas challenge is swelled by the likes of Australians Mick Alton and Daryl Rayner, German Mike Roscher and Frenchman Francois Leblond – father of Estelle.

The complete top ten is as follows:

The news comes after the top 20 seeded riders were revealed for the 1000cc solo classes at last weeks Official TT Launch.