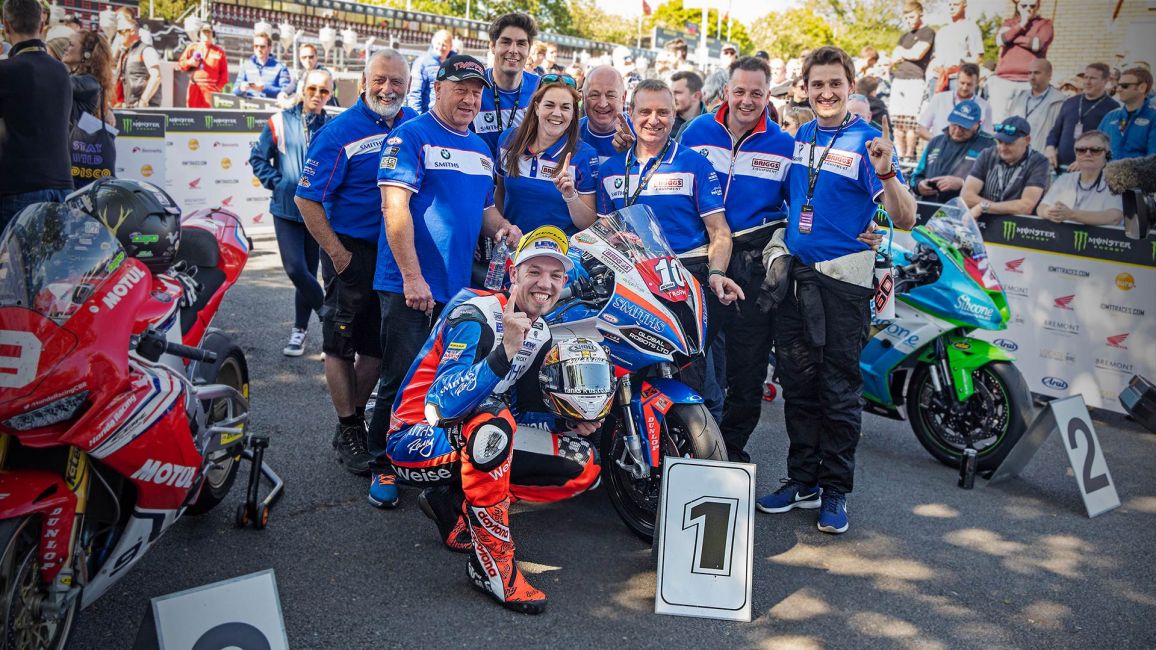 2019 has been another standout year for the 32-year old, bringing his tally of TT victories to 5 with two victories on-board the BMW S1000RR in the RST Superbike and RL360 Superstock Races and further glory on the Smiths Racing Trooper Triumph in the second Monster Energy Supersport Race. Hickman was denied a second consecutive Senior TT victory at the end of the week when he was forced to relinquish a 17-second lead at the midpoint of the race due to a cooling issue, ultimately nursing the bike home to a second place finish behind Silicone Engineering’s Dean Harrison.

Hickman and the Smiths team kicked off their 2019 road racing season in fine style with victory in the first Superstock race at the North West 200 – only two days after their all-new BMW first turned a wheel. The rest of the meeting was disrupted by weather and the team opted to sit out a number of the remaining races, but it proved to be a successful shakedown ahead of the hat-trick of victories at TT 2019.

The team then continued their fine run of form at August’s Ulster Grand Prix where Hickman proved unbeatable, winning all seven of the races he contested and creating history as the first rider ever to do so.

Hickman concluded his road racing season at the Macau Grand Prix and looked favourite to take a fourth victory in five years on the MGM by Bathams-backed Smiths Racing BMW. However, a series of incidents resulted in the race being red-flagged twice and ultimately abandoned, with a result somewhat controversially declared with Michael Rutter as winner.

The news that Hickman and Smiths Racing will be the official BMW Motorrad International Road Race team comes as a great reward to the family-run team that has achieved such great successes in a relatively short period.

Speaking about the news, Peter Hickman said: “I’m really excited that BMW Motorrad have rewarded myself and the Smiths Racing team with the official status for the International Roads in 2020. The team deserve this reward after all their efforts these last few years and it’s an exciting time ahead for us all. I can’t wait to get testing in the New Year and be even more competitive than this year!”

Darren Jones, Team Manager, added: “I’m really proud that BMW have chosen Smiths Racing to be the official team on the roads for 2020. The team have come a long way in a short space of time and achieved so much as a group of professional people and in my opinion, it’s what they all deserve. Alan and Rebecca [Smith] have put so much into the sport and the BMW Motorrad brand. We had a good year with the all-new BMW S1000RR and I’m confident with BMW Motorrad behind us and some winter testing, we can push the boundaries even further.”

He continued: “Peter is a big asset to all of us and his speed just keeps on impressing. I’m confident that there is more to come…”