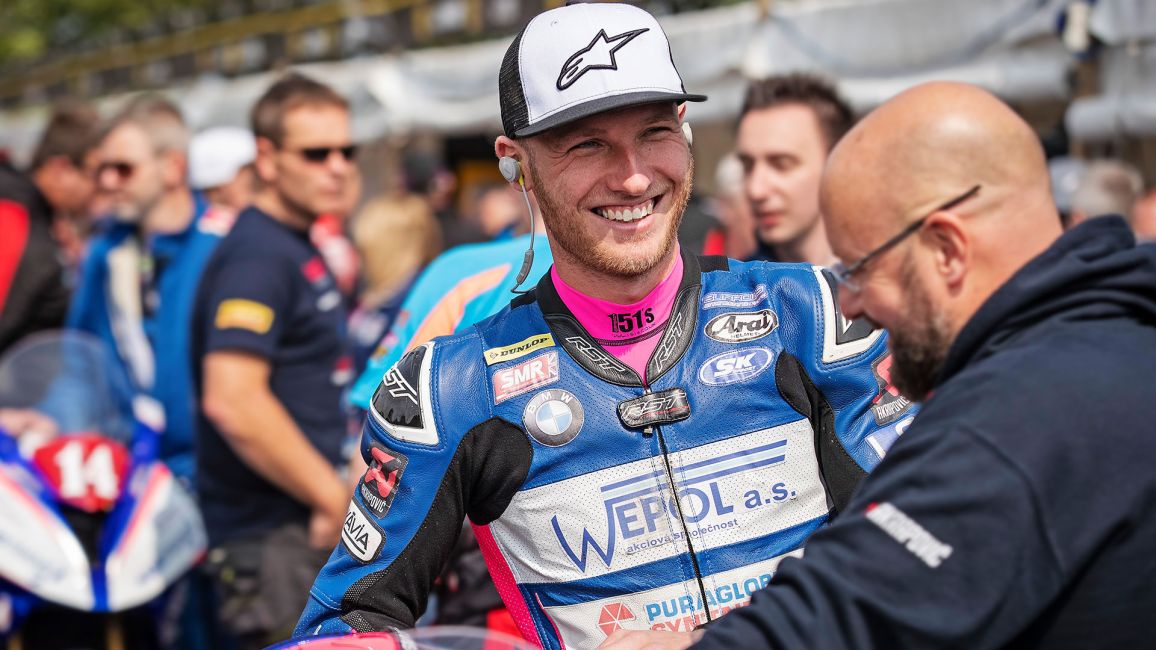 Davey Todd put the frustrations of missing out on riding the Honda Racing Fireblade down Bray Hill this year behind him to storm to the top of the leaderboard with the fastest outright time in the second of the four race days for the Virtual TT powered by Motul.

The Saltburn rider, who enjoyed a similar meteoric rise to his TT career with a fastest actual lap of the TT Mountain Course of 131.491mph in only his second year of racing, confessed to ‘feeling the pressure’ ahead of his lap.

However, he put nerves behind him with a near faultless display – a spill at Hailwood’s Height and Hillberry aside - and a series of blistering splits, using every inch of the track, covered his mistakes to stop the clock at a remarkable 146.52mph (15:45) in the game version.  After switching off his console, Davey Todd revealed: “I only just beat Jamie Coward in last year’s Senior so it was good to stay ahead of him."

Davey, the second fastest ever newcomer to the TT, was ably supported by his teammate Sam Tipper from the Isle of Man who posted the fastest ‘gamer’ time to date and Team Todd’s combined aggregate time of 140.216mph/ 32:29 gave them a comfortable lead at the top of the table.

The first competitors on the grid in last night’s heat saw Spain’s Raul Torras Martinez team up with gamer Aaron Hislop, son of legendary 11-time TT race winner Steve Hislop.  Raul elected to electronically fire up his own Yamaha while Aaron reset the digital clock with his father’s iconic Norton on which Steve so memorably won the 1992 Senior TT.

Aaron, already sporting a broken arm from a spill in real life, somehow passed the pre-race medical.  He soon came a cropper on the exit at Glen Helen and also clipped kerb on the run into Ramsey and although he regained his composure, a couple of further slips, just after Signpost Corner, cost him vital seconds.  He eventually finished in a highly respectable 124.933mph/ 18.12 although he later bemoaned the lack of power from the ‘White Charger’ compared to the modern bikes.

Raul was quickly on the pace away from the grandstand and was nine seconds ahead of Jamie Coward’s time from the first heat at the opening split at Glen Helen. However, he misjudged the racing line at May Hill on the exit of Ramsey which cost him five seconds, and another mistake at the slowest point on the course – Governors Dip which he blamed on ‘a lack of focus’ saw him ultimately finish a second outside Coward’s lap time with 138.205mph/16.38.

The team’s aggregate time of 131.234mph/34.50 briefly moved them to the top of the leaderboard and left them praying for an electric rain storm, before Team Todd stormed through in the second heat to finish over two minutes ahead of Team Martinez.

The ‘Virtual TT powered by Motul’ features eight TT heroes in four ‘race day’ heats getting to grips with a new challenge, by tackling the familiar course from the comfort of their own homes via the newly released game, TT Isle of Man: Ride on the Edge 2.

Each professional rider has teamed up with an experienced gamer from around the world to complete one lap of the famous course on the TT game. The team’s aggregated lap time will be their leaderboard score as they go ‘head-to-head’ with the other teams to decide who will be crowned ‘Virtual TT 2020 Champions’.

The next Virtual TT teams to step up to the console are Team Toniutti (Julian Toniutti/Darrell Grundy) and Team Cummins (Conor Cummins/Louis Porter) who will be going in heat three on Wednesday at 8pm on iomttraces.com and via the TT social media channels @ttracesofficial.

The edited highlights including interviews with the competitors and full lap coverage from the first four heats are now available on the Official digital channels - iomttraces.com and @ttracesofficial YouTube, Facebook and Twitter.