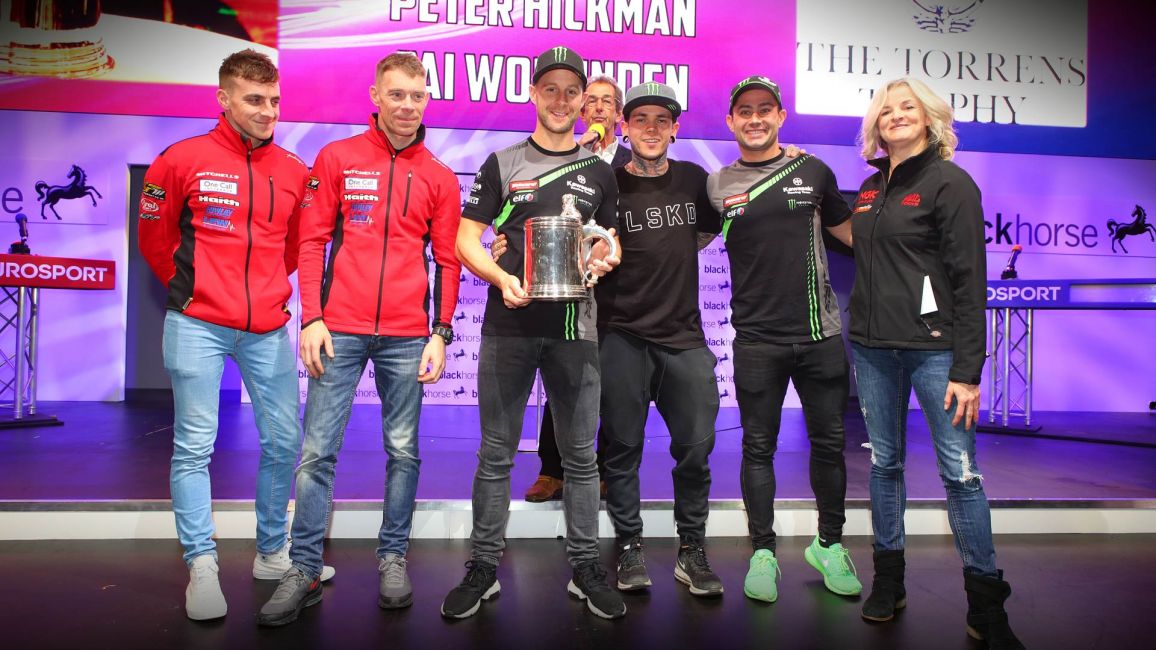 TT Stars Peter Hickman and Ben and Tom Birchall have been shortlisted for the prestigious Torrens Trophy. The trophy is awarded to the individual or organisation who is considered to have made an outstanding contribution to motorcycling in Britain.

The Royal Automobile Club, organisers of the Trophy, announced the shortlist, featuring the Birchall brothers and Peter Hickman, as well as 2018 BSB winner Leon Haslam and World Speedway title winner Tai Woffinden at the Motorcycle Live show at the NEC in Birmingham. The overall winner will be announced at the Club’s Pall Mall Clubhouse in early 2019.

Ben and Tom Birchall crowed a stunning 2018 season by clinching the 2018 FIM World Sidecar Championship at the final round of the season in Germany. With only one point separating the Birchalls and fellow TT stars Tim Reeves/ Mark Wilkes coming in to the seventh round, the championship saw a thrilling showdown. The win gave the Birchalls a third world title and second championship victory.  This followed their spectacular TT which saw them set a new outright lap record for the class of 119.250 (18:59.018) – the first sub 19 minute lap of the TT Mountain Course – as well as winning both Sidecar races on the Isle of Man this year.

Peter Hickman’s nomination came on the back of  a breakthrough TT year that saw him win his maiden TT win - in the Superstock class  - which was a precursor to a sensational PokerStars Senior TT when the Lincolnshire rider set a new outright lap record of 135.452mph, overhauling Dean Harrison on the last lap to win by a couple of seconds.

The Club's Torrens Nominations Committee consists of Chairman and ex-bike racer Barrie Baxter, Royal Automobile Club Chairman Ben Cussons, well-respected motorcycle journalist and TT winner Mat Oxley, commentator and former racer Steve Parrish, Club member Richard Bourne (son of motorcycle journalist, Arthur Bourne, in memory of whom the Trophy is awarded) and Maria Costello MBE who is the current president of the TT Riders Association and previously featured in the Guinness World Record for being the fastest woman to lap the Isle of Man TT course.

The Royal Automobile Club has always had a close association with the motorcycling world and the Isle of Man. The Club formed the Auto Cycle Club in 1903, which went on to become the Auto Cycle Union in 1947.  The first motorcycle race was held on the Isle of Man in 1905 for cars - two years before the first Tourist Trophy for motorcycles.

The Torrens Trophy was first awarded in 1978 in memory of Arthur Bourne, a motorcycling journalist who wrote a column under the name Torrens. Arthur Bourne was also a Vice-Chairman of the Royal Automobile Club. It has only been awarded 11 times in its history and only when the Club feels that the achievement justifies it. Previous winners include Ian Hutchinson who was awarded the Trophy in 2015 in recognition of his return to the top step of the TT podium in 2015 following injury.