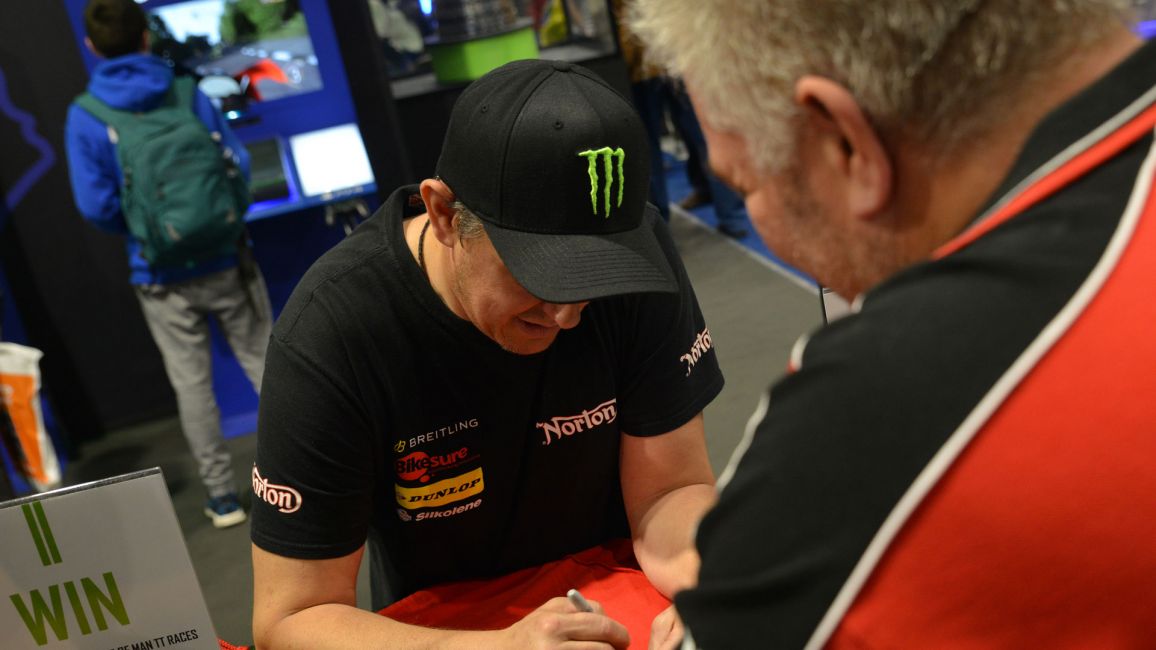 The TT Stars will be taking centre stage this weekend at Motorcycle Live at the NEC in Birmingham, including the now traditional ‘TT Day’ on Sunday 25th November and you can meet the headline makers on the TT stand.

The record-breaking year that the TT enjoyed in 2018 will be reflected by the fact that some of the fastest men in TT history will be appearing at the show.

Led by Superbike lap record holder Dean Harrison and outright lap record holder Peter Hickman, who also holds the Superstock class lap and race record, the pair of aces who thrilled TT crowds this year as they went head to head in virtually every race, will be meeting fans and talking through their epic battle, which culminated in Hickman’s incredible Senior TT win, in a series of chat shows over the weekend with James Whitham and Steve Plater.

Multiple race winners John McGuinness and Ian Hutchinson, who between them have 39 TT Race wins, will be sharing their thoughts on injuries and comebacks as they look to remind people that they remain a threat despite recent struggles.

Three sidecar winning crews will be at the show this weekend – Ben and Tom Birchall, Tim Reeves/Mark Wilkes and John Holden with new passenger Lee Cain. The Birchall Brothers have undoubtedly taken sidecar racing to a new level with their double TT victory in 2018 and outright lap record and it will be fascinating to hear the thoughts of the other two crews as they look to close the gap.

Other solo competitors confirmed to appear this weekend include James Hillier and Conor Cummins, who both enjoyed podiums this year and newcomer Davey Todd, the RST Star of Tomorrow award winner,

Visitors to the TT stand this weekend will also get the chance to get the unique sight of how to tackle the TT Mountain Course from TT Rider Liaison Officer, and former Race winner, Richard Milky Quayle as he commentates on a high definition, big screen on board lap.

You’ll also see some of the bikes that made the headlines at this year’s TT on the TT stand and can inspect the roll of honour on the Senior TT Trophy, while you may even get the chance to go experience what it’s like to head down Bray Hill for yourself as the hugely realistic multi-platform TT game ‘Ride on the Edge’ will be on the stand with two playable kiosks available for visitors to try and beat the legends.

And if all of this whets your appetite to go to the TT next year and witness the next chapter in the event’s great history, you can talk to TT organisers about planning a trip and can book your front row seats for the World’s Ultimate Road Race.