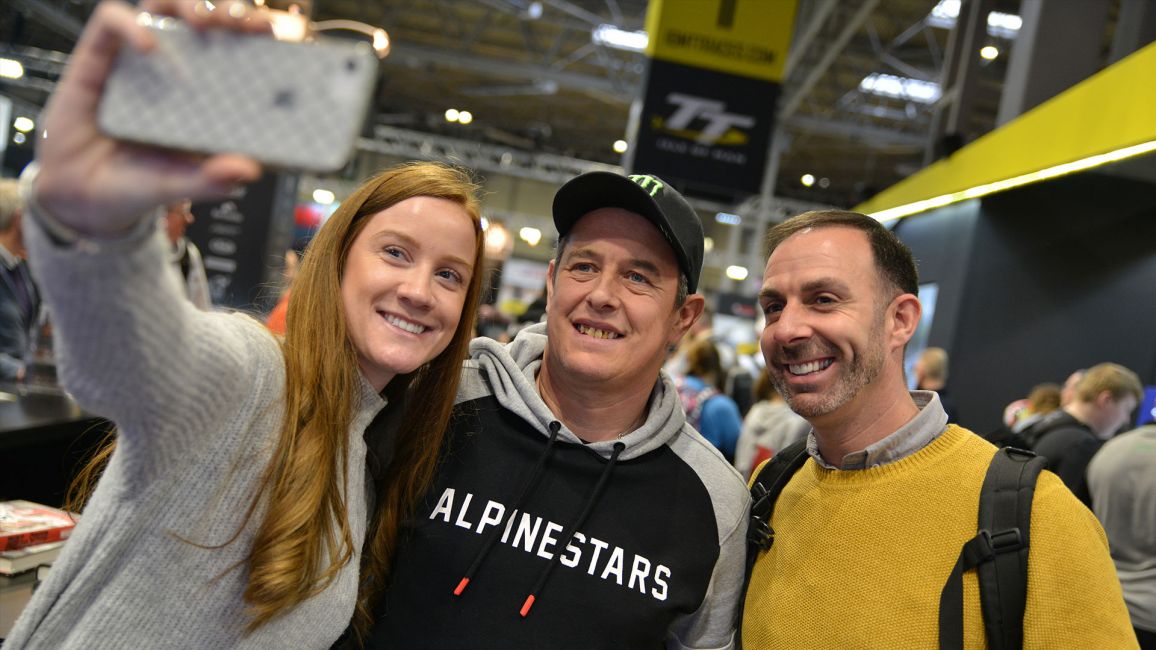 TT FANS OUT IN FORCE AT MOTORCYCLE LIVE

The TT Races topped the bill at the Motorcycle Live show in Birmingham last week, with thousands of TT fans meeting their heroes and taking in the stunning displays on the TT Stand.

Many of the leading riders dropped into the show to meet fans and sign autographs including 3 time 2019 TT Race winner Peter Hickman and Dean Harrison, who won the 2019 Dunlop Senior TT.

Others at the show included Davey Todd and TT debutant Glen Irwin who made the headlines when they announced that they will be representing the Honda Racing team at next year’s TT while Michael Dunlop, Conor Cummins, James Hillier, Bruce Anstey, Jamie Coward, Adam McLean Ben and Tom Birchall, Dom Herbertson, John Holden and Lee Cain and Ian Hutchinson also made appearances.

Michael Rutter, fresh from the top step in Macau, dropped into the TT stand and signed copies of his new book – ‘the Life of a Racer’ while John McGuinness, the most successful TT rider in the modern era, also hot footed it from Macau to appear at the show.

Fans also enjoyed a unique collection of record breaking machines with the ‘Modern Milestones’ display that featured six of the most important TT machines from the past two decades including the fastest machine ever to lap the TT Mountain Course – Peter Hickman’s 2018 Smiths Racing BMW on which he set the outright lap record of 135.452mph. Other milestone marking bikes that fans had the chance to view close up were Michael Dunlop’s first sub 17 minute lap bike – the Hawk Racing BMWS 1000RR – from 2016 and David Jefferies 2000 Senior TT Race winning V&M R1 Yamaha– the first bike to lap the Mountain Course at over 125mph.

As well as the headline making race bikes, the stand featured four front running bikes from the 2019 event – complete with full kit from the riders who raced the bikes as part of a collaboration with TT Sponsors RST and Arai.  Conor Cummins’s Milenco by Padgett’s Motorcycle Honda Superbike, Ian Hutchinson’s Honda Racing Superbike, Jamie Coward’s Prez Racing Yamaha and Lee Johnston’s TT winning Ashcourt Racing R6 Yamaha were all be on the stand along with Ben and Tom Birchall’s double sidecar TT Race winning machine.

Another popular feature on the stand was Milky Quayle’s commentary of some of the fastest on board laps as the Manx former TT Race winner, and current TT rider liaison officer, shared his intimate knowledge of racing the Mountain Course while many fans also took the opportunity for their own personal picture with the RST Superbike TT Race trophy which was making a rare trip off the Isle of Man for the show.