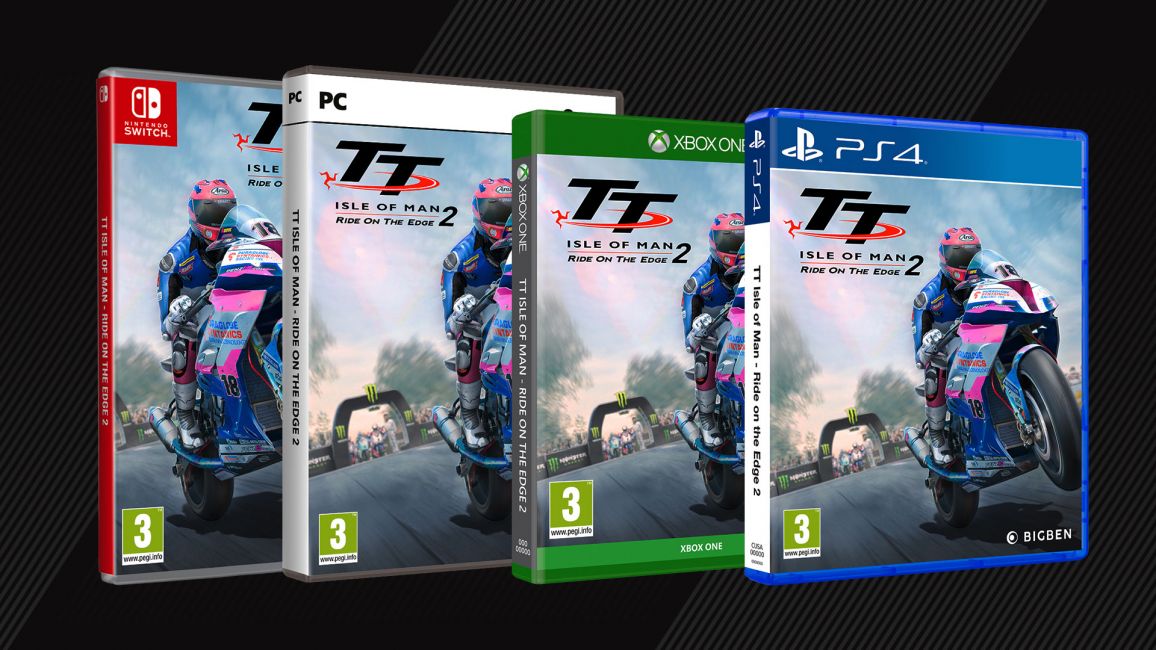 Bigben and KT Racing will be returning to the TT Mountain Course with technical improvements to their TT game - TT Isle of Man – Ride on the Edge 2.

Thanks to meticulous work of the KT Racing team, fans now have the chance to take to the road on the iconic TT Mountain Course with ‘TT Isle of Man’ – Ride on the Edge 2 which offers players an unprecedented motorcycle racing experience at home.

The bike physics have been rebuilt from the ground up to create ultra-realistic behaviour. The gyroscopic effect is now completely integrated for more precise steering, and speed wobbles have been added to alert riders that a fall could be imminent. The brakes and shock absorbers have also been redesigned. They now respond to all bumps in the road and create a riding experience that is much more faithful to what a real motorcycle racer experiences on the iconic TT Mountain Course.

From the handlebars of your bike, shave valuable seconds off your time by using your opponent's slipstream to pick up speed, and find the best line in the run in to corners to maximise your bike's grip. Managing wear and tear of parts is also part of the game experience: the brakes, suspensions, engine and tyre temperature all need to be monitored for the best ride and to reach the finish line of the 60km circuit, especially if you complete all six laps of the race!

To provide players with the most realistic simulation possible, the KT Racing studio turned to one of the best up-and-coming riders, Davey Todd, and the fastest French rider on the Isle of Man circuit, Julien Toniutti.

The 23 year old Davey Todd already has an impressive track record in his short career to date. In 2018, while preparing for his first Isle of Man TT, Davey decided to practise on his brother's console for two months so he could perfect his knowledge of the iconic 60km circuit. As a result, he was ranked 2nd in the game's worldwide leaderboards and subsequently became the second fastest newcomer of all time in the real race. In 2019 he proved his riding talents in his second appearance at the TT by finishing in the top 8 in all categories and achieving 6th place in the Senior TT Race.

2020 represents a new year full of ambition for Davey, who is also the TT Isle of Man - Ride on the Edge 2 ambassador and the face of the game.

Like Davey Todd, Julien Toniutti collaborated on the game's production by sharing his experience and impressions with the developers to help them create a strikingly realistic simulation and optimise all aspects of the riding physics.

"Competing in the TT is the ultimate dream of any rider. In TT Isle Of Man - Ride on The Edge 2, the aim is to reproduce the sensation of speed and adrenalin, as well as the concentration and control required for any Tourist Trophy rider, while the player sits comfortably in their chair, risk free," said Julien.

Julien Toniutti is an experienced rider who has taken part in the TT three times. In 2018 he beat the all-time fastest lap record for a French rider on the Isle of Man circuit and subsequently received the "Fastest French Road Racing Rider" award at the Paris Motorcycle Show.

In the next few weeks, you can experience the fruit of these collaborations and the resulting improvements by picking up a controller.

TT Isle of Man - Ride on the Edge 2 will be available in March 2020 on PS4, Xbox One, PC and later on Nintendo Switch.