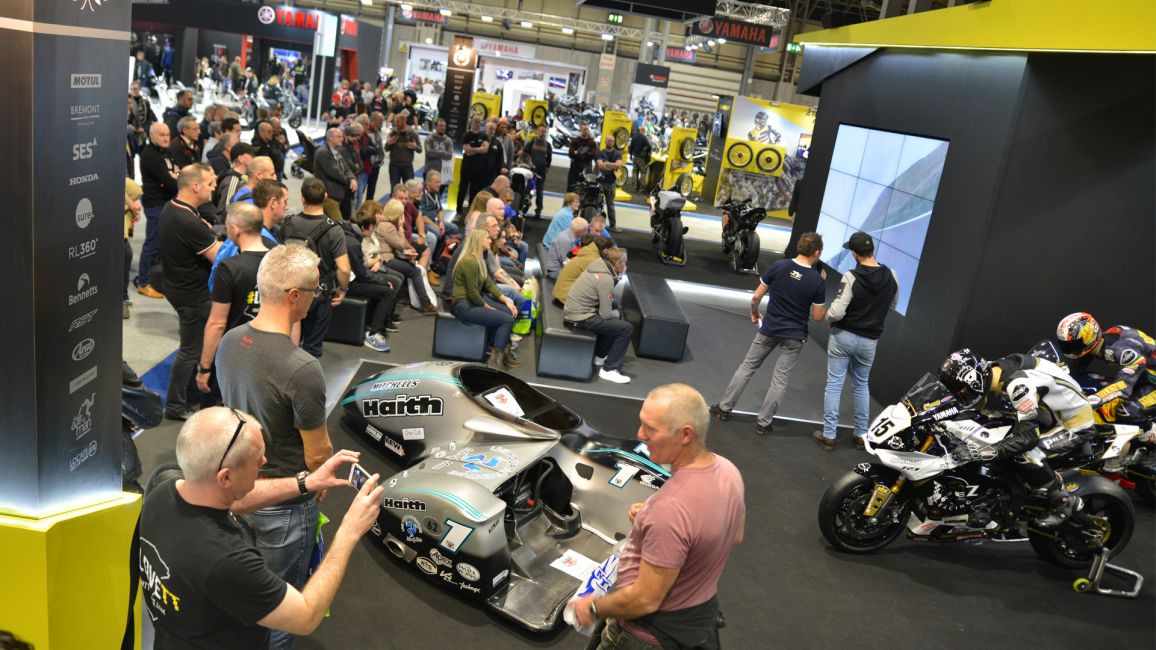 The leading TT stars are set to take centre stage this weekend at the Motorcycle Live show in Birmingham with the final day of the show – Sunday – declared ‘TT Day’ by the show organisers.

Leading the way, as he did at the TT this year, is Peter Hickman, who added 3 Race wins to his name following his double Mountain Course victory in 2018 while his closest challenger, Dean Harrison, who won the 2019 Dunlop Senior TT, will also be in attendance to meet fans and sign autographs.

Davey Todd and TT debutant Glen Irwin made the headlines this week that they will be representing the Honda Racing team at the TT in 2020 and the pair will be making their first public appearance  since the announcement was made, on the TT stand where fans will have the chance to ask them about their 2020 plans.

Michael Rutter, fresh from the top step in Macau, will be dropping in to the TT stand over the weekend while John McGuinness, the most successful TT rider in the modern era, will also be around to meet fans throughout the weekend and ITV4’s Steve Plater, a double TT Race winner, will be chatting to all of the riders in a series of intimate 1 to 1 interviews on the TT stand.

A unique collection of record breaking machines that have defined an era, and your chance to follow in the footsteps literally of some of the greatest riders and create your own TT race podium – and be pictured with the actual Superbike TT Trophy - are just two of the features fans can look forward to on the Isle of Man TT stand this weekend.

Race fans can also secure the best seats in the Official Grandstands for next year’s event with a show exclusive 10% discount. Simply visit the stand to secure your tickets on the much in demand tickets.

Fans can also see a ‘Modern Milestones’ collection on the stand featuring six of the most important TT machines from the past two decades – bikes that have dominated the headlines and ripped up the record books over the last twenty years at the TT including the fastest machine ever to lap the TT Mountain Course – Peter Hickman’s 2018 Smiths Racing BMW on which he set the outright lap record of 135.452mph. Other milestone marking bikes that fans will be able to view close up are Michael Dunlop’s first sub 17 minute lap bike – the Hawk Racing BMWS 1000RR – from 2016 and David Jefferies 2000 Senior TT Race winning V&M R1 Yamaha– the first bike to lap the Mountain Course at over 125mph.

Two leading modern competitors will be represented by bikes that they raced early in their career when they were establishing their reputation - Bruce Anstey’s 2003 Valmoto Triumph Daytona 600  from 2003 when he won chalking up Triumph’s first TT win for 28 years and John McGuinness’s Superbike and Senior double TT race winning HM Plant Honda Superbike, on which the ‘Morecambe Missile’ so memorably set the first 130mph lap of the course in the centenary TT in 2007.

Another modern day legend Ian Hutchinson’s Padgetts Honda Superbike that the Yorkshire racer rode in winning the first and fifth race wins in that historic week in 2010 will also feature in the definitive collection.

As well as the headline making race bikes, the stand also features four ‘front running bikes from the 2019 event – complete with full kit from the riders who raced the bikes as part of a collaboration with TT Sponsors RST and Arai.  Conor Cummins’s Milenco by Padgett’s Motorcycle Honda Superbike, Ian Hutchinson’s Honda Racing Superbike, Jamie Coward’s Prez Racing Yamaha and Lee Johnston’s TT winning Ashcourt Racing R6 Yamaha will all be on the stand as will Ben and Tom Birchall’s double sidecar TT Race winning machine.

You can also see highlights of all of last year’s action via the big screen, which will also be showing some of the fastest on board laps talked through at the show by TT legend Richard ‘Milky’ Quayle who will be sharing his intimate knowledge of racing the Mountain Course.

This year’s on stand competition offers TT fans the chance to win a VIP trip to the TT while there is also the opportunity to play the latest version of the ‘Ride on the Edge’ TT game on Playstation consoles on the stand.