Crutchlow is also one of only two of those riders that hasn’t won an Isle of Man TT race. The other is Sheene, who famously disliked the TT, not so much because it holds all the usual perils of street circuits (because he won races on street circuits throughout Europe) but because its 37¾ miles make it the territory of the circuit expert.

Sheene contested the 1971 TT but never had his heart in it. Crutchlow has never contested the TT but has a huge love for the event and for the circuit. The 35-year-old has lived on the Isle of Man for more than a decade, allowing him to get closer to the event and the people that make it happen, from the riders to the organisers.

‘I love living on the Isle of Man, especially when the TT is on because it’s such an amazing event,’ says Crutchlow, winner of three MotoGP races. ‘People ask me all the time, which MotoGP race should I go to? Which is the best? I always say, Mugello is fantastic, Barcelona is great and Aragon, if you want it quiet. Then I always finish by saying, save your money and spend a week at the TT because there’s no spectacle like it on Earth.

‘Ever since I started living here, I’ve loved the TT even more, because I’m able to go out and watch all the time. There’s MotoGP on the TV pretty much every weekend in the summer, but with the TT you’ve got practice week and race week, once a year, so it’s like nothing else.

‘I live in Ramsey, so I love walking up from our house to watch at Waterworks. You hear them screaming out of Ramsey, then it all goes quiet at the hairpin, then they come screaming towards you. It’s fascinating, because you wouldn’t believe how close they get to the wall coming out of there. It’s definitely nothing like MotoGP. 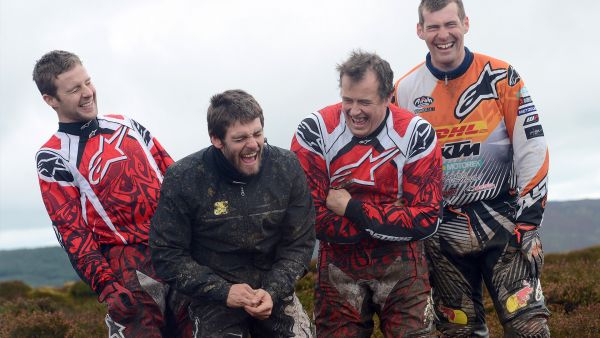 ‘My favourite thing is riding my trials bike from the house to watch the guys up on the Mountain, riding through the fields on the inside of the circuit to see how they tackle different parts of the course.’

Crutchlow made his first visit to the Isle of Man with his racer father, Dek, about 20 years ago. ‘My dad used to do some of the roadraces in Europe, like Chimay, Mettet and Hengelo,’ he says. ‘Although he never did the TT, we flew over in his little plane to have a look. I was 15 or 16, so I was already racing. First thing we did was stand in the fields by the school at the top of Bray Hill. I loved it immediately.’

Did Crutchlow ever consider contesting the TT? ‘I was very close to doing the NW200 [often a warm-up roadrace for riders contemplating the TT] in 2006,’ answers Crutchlow, ‘but I was leading the British Supersport championship at the time, so we decided not to. If I think back now, I don’t think roadracing would’ve been the best choice for me. But absolutely, if I sit down and have a think, I’m like, yeah, I’d love to do the TT, but for two things: I haven’t got the balls to do it and I’d be divorced if I did, simple as that.’

Crutchlow has raced the world’s greatest motorcycle racers of the last decade or so - Valentino Rossi, Marc Marquez, Casey Stoner, Jorge Lorenzo and the rest - but he has a special respect for TT riders, especially those he watches around the course, like Peter Hickman, John McGuinness and Michael Dunlop.

‘Any of those MotoGP guys would be fast at the TT,’ says Crutchlow firmly, ‘but I don’t believe they’d go out and be as fast as Hicky and the other guys. It’s a totally different mindset. I have so much respect for all the riders that have done it and that do it now.

‘I think the TT is about loving motorbikes, loving riding bikes and loving the Isle of Man. It’s the kind of racing I wish I was in: no bullshit, just ride and enjoy it. Of course, it’s run brilliantly, but it’s so different to the world of MotoGP.’ 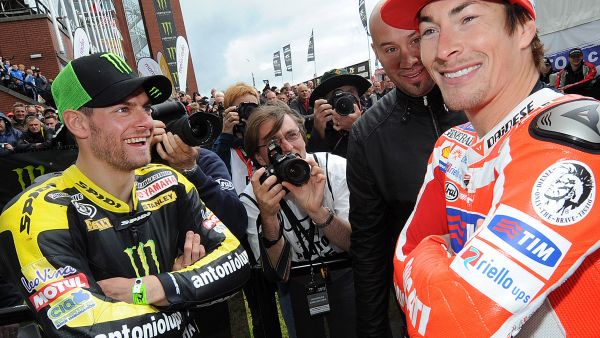 Cal and Nicky Hayden at the TT in 2011, picking over their lap with some amusement

Although Crutchlow has never raced the TT he has ridden the course on closed roads on several occasions. He rode the race-week Parade Lap in 2011, 2013 and 2014, with MotoGP stars including Mick Doohan and Nicky Hayden. And he never rode slowly.

‘I know the TT Course because I’ve cycled around it a million times,’ adds Crutchlow, who is into cycling as much as he’s into motorcycling. ‘But you have no perception of how fast the circuit is until you ride it on closed roads. It’s just an incredible adrenaline rush and I can see why people do it and I can see why they love it.

‘The thing is that whenever I’ve done the Parade Lap, I’ve set it up with ‘Milky’ Quayle [a former TT winner who now helps TT newcomers learn the course], because he knows I want to push on a bit. I go slow for the first bit, then hammer it.

‘The one thing I can’t believe whenever I do it is how much tunnel vision I get. Somewhere like coming onto Sulby Straight, through the trees, it’s like the trees are closing in on you. It’s so different from MotoGP, where everything is so open. I don’t go slow around there and the sense of speed you get at the TT you get nowhere else. The MotoGP guys who’ve never seen roadracing can’t believe it when they actually ride around the course.’

Crutchlow has had a few near-misses during his Parade Laps, most memorably at Bedstead, a medium-speed left-hander half a mile from the finish. ‘I went into Bedstead a gear too high because I thought it was way faster than what it is,’ remembers Cal. ‘Boom! Up the kerb, hit the bush, back out into the road and hit the bank on the other side. Surreal. I shit myself, no doubt about that.’ 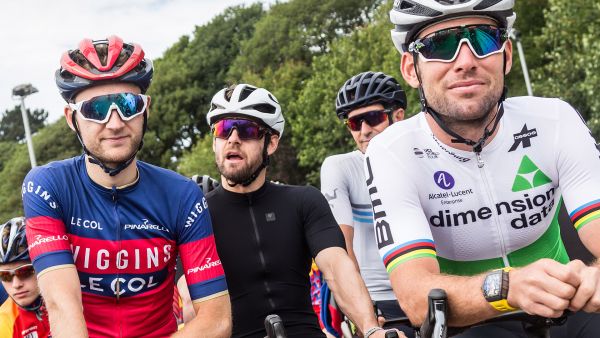 Relaxing at home? Cal wondering what he’s just got himself into, lining up with pro-tour cyclists Mark Christian and Mark Cavendish

Crutchlow retired from full-time MotoGP competition at the end of last year. He is currently Yamaha’s MotoGP test rider, helping the factory develop its YZR-M1 and occasionally contesting races, which gives him more time to relax at home in Ramsey and look forward to the 2022 TT.

‘We’ve all really missed the TT these past couple of years, so I know that next year’s races will be more special than ever. And even though no one’s raced here since 2019 they’ll definitely be going faster. I can’t wait!’