‘When you go round that course, you have no idea how long it can actually take, how tricky it is, and how exhilarating it feels going past all those iconic landmarks. That was an awesome experience that I’ll never forget.’

Remembering his first lap of the mighty TT Course, Carl Cox sounds like any other fan. But, of course, that’s exactly what he is. After all, boasting some celebrity status does not mean you’re any more immune from falling in love with this sport - or the TT. In fact, it makes perfect sense when we consider the millions of people who follow motorsport. Some of those are even A-list film stars, like Keanu Reeves, so why not an A-list music producer and DJ?

But like Keanu, Carl isn’t content with sitting in front of a television screen or simply prowling around the paddock. His is a passion that is only really sated by getting behind the wheel or twisting the throttle. They are hardly alone either. Famously, Steve McQueen came close to winning the gruelling 12 Hours of Sebring in 1970, albeit thanks to a stunning display from his team mate, Peter Revson. But comparable to McQueen, Carl has a more guttural and instinctive ‘need for speed’, and it is one that has grown from a surprisingly low-key introduction: British television in the 1980s.

If you’re of a certain age, or grew up in Margaret Thatcher’s Britain, you’ll well remember Grandstand and World of Sport – those iconic sports magazine programmes that pre-dated satellite TV and hogged two of four domestic channels on a Saturday afternoon. Fronted respectively by Des Lynam and Dickie Davies - two suavely moustachioed presenters - kids all around the country discovered a new set of sporting heroes, not least Big Daddy, Giant Haystacks and Kendo Nagasaki, who would bounce off one another in the wrestling ring.

However, there was also a fresh smorgasbord of motorsport to sample, served from iconic venues such as Brands Hatch in the UK and Bathurst in Australia. Often accompanied by the enthusiastic tones of one Murray Walker, it proved a high-octane mixture that young Carl found irresistible. Carl would later enter the explosive world of drag racing - even joining the fabled ‘five-second club’ – but it was sidecar racing that made the biggest impression on the young man from Oldham.

‘I loved Saturday afternoons and World of Sport,’ remembers Carl. ‘When I was a young lad, I would watch rallycross, stock car racing, drag racing, motorcycling - all that sort of stuff. I liked watching the bikes, but the sidecars had two guys, or maybe two girls, one was hanging off while the other was tucked in and twisting the throttle. I just loved the sidecar racing and I followed it as much as I could.’ 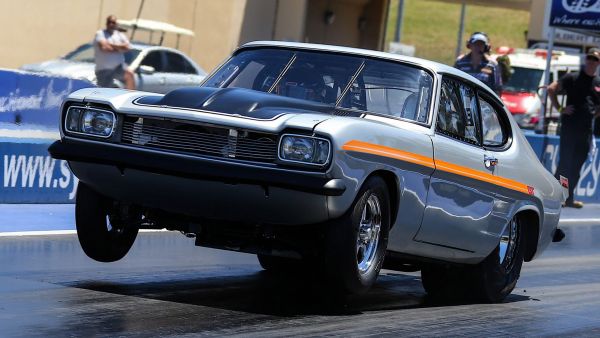 “I was into drag racing as a kid. I used to get bangers that looked like crap on the outside but went like hell. I would buy anything and race it… and I haven’t grown up yet!”

One of the most charming DJs in the business, Carl Cox is also one of the music industry’s biggest draws. As Carl’s music career took off, however, he found it harder and harder to keep abreast of all the sport he wanted to, even giving up his own interest in racing cars.

‘I already had two jobs,’ explains Carl. ‘Drag racing costs money and I was spending most of what I was making in the building trade on my music. Meanwhile, every weekend I would break something on the car drag racing and end up back at the breakers yard. Music or racing? I couldn’t do both so one of them had to go. I also needed a more sensible car! I missed out on a lot of racing, but I’m playing catch up now.’

Carl’s certainly been doing a lot of catching up and his patience has really paid off, with success in the music industry gifting him the means to really indulge his passion for motorsport – first, via his own participation in a number of disciplines, but also through the support of other talented competitors, from grassroots level upwards.

‘I never really set out to have a motorsport team, it’s just something that happened,’ says Carl. ‘The whole thing started in New Zealand. It was 2013 and I had an idea of getting into motorsport via a sidecar pairing called Smith and Shorter Racing. They needed financial backing to compete in the New Zealand series. Barry Smith got injured and couldn’t race, so Robbie Shorter was paired with Colin Buckley and that was the pairing we took to the TT in 2015 and 2016. We finished 11th for two consecutive years, which was amazing, but there was no real structure to it.’

Carl wasn’t quite as ‘green’ as Buckley and Shorter, however, having travelled to the island a couple years before the team’s debut. It was trip that was a long time in the making, but with his music still a priority, he had always found it difficult to create the time, believing also that following the event on television would be a satisfactory substitute. His friends, however, were adamant that it was time for Carl to travel to the island and discover the TT for real.

‘I was always too busy to visit the TT and the only way I could catch it was on television,’ he says. ‘I had mates who were avid bikers and they would all talk about it religiously. They were so passionate about it and they would tell me you’ve got to be there to really feel it and understand it. 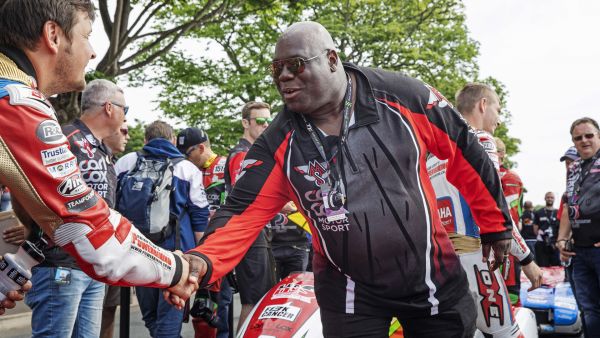 Always gifting time for fans and fellow competitors, Carl is a popular presence at the Isle of Man TT, pictured here wishing Alan Founds the best of luck.

‘The first time I got to see a race for real, I was sitting trackside ready to film with my phone. A bike sped past incredibly quickly and I looked over to the other spectators as if to say, damn that was fast! One raised an eyebrow and told me it was just a marshal checking the track, which I could barely believe. Watching the actual competitors was a true wakeup moment. Only then did I really understand the endurance aspect of the event and just what these guys go through.

‘I also remember the first time I toured round the TT Course with my friend Brian, who would go to the Island to marshal. I was trying to take pictures of all the famous course signs because they were always a firm favourite of mine - what with all the history behind those names. That’s when it hit home; I was finally on the island!’

Planned or not, Carl Cox Motorsport has grown and flourished since Carl’s first steps on the Isle of Man. The superstar DJ continues to support the Kiwi racing scene, in particular, and has established a grassroots race series for youngsters whilst also keeping involved locally with the Bruce McLaren Motorsport Park. Meanwhile, Carl’s love of sidecar racing means support for three pairings. Indeed, it was the sidecar class that led Carl back to the Isle of Man, this time providing the sidecar for Tim Reeves (8 x World Sidecar Champion) and Mark Wilkes, with the team securing a brace of podiums at TT 2018.

With such eye-catching results, Carl was soon helping to advance more racing careers, and today we don’t have to look too far to find riders sporting the red and black logos of Carl Cox Motorsport. Two such competitors are Damo Rees and Shane Richardson, whom Carl describes as “Kiwis on walkabout”. Racing in the Superstock class amongst the British Superbike Championship regulars, Damo and Shane are exactly the sort of rider Carl likes to support, with the motorsport fanatic proving adept at identifying up-and-coming talent whom he can help move up to the next level. 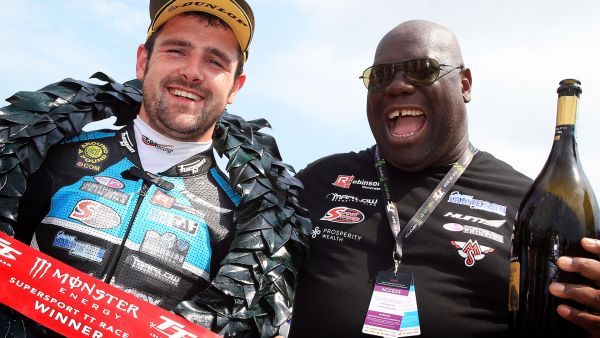 “This is good, I’m getting to watch an expert up close and understanding what it takes to perform at his level.”

One rider at the pinnacle of the sport, however, is Michael Dunlop, with 19 TT wins to his name already. So how did Carl - a man who clearly values grassroots racing - come to work with one of the biggest names in the sport? ‘Michael showed interest in our sidecars,’ he says, matter-of-factly. ‘He had an idea of contesting the sidecar class at the TT. It never happened, unfortunately, but he and I got on really well and there was an opportunity there to support him. Michael was doing plenty of winning and I thought, this is good, I’m getting to watch an expert up close and understanding what it takes to perform at his level.’

The tie up was yet another example of Carl allowing instinct and opportunity to guide his decision making. It’s a way of working that has allowed Carl to do much of the aforementioned “catching up,” delivering a great deal of success along the way. But there’s also real satisfaction for Carl and his team in the knowledge that their input at amateur level is contributing to the health of the sport as well as the advancement of many of its participants.

Perhaps it becomes something of a drug to see first-hand how a little help and support can make such a difference. It would go some way to explaining the team’s ever-expanding race programme, which today boasts some four-wheeled motorsport too - including a foray into Australian Supercars with an exciting young driver, Cameron Waters.

But let’s not forget, it was Carl’s own racing that he put on hold nearly three decades ago to concentrate on his music career. Was that the singular most important decision Carl’s ever made? It’s hard to see it any other way. Yet, via a seemingly strange turn of events, prioritising his music has meant the once amateur racing driver now oversees one of the most intriguing motorsports team on the planet. It’s also led to a place in time where Carl can truly indulge his own ‘need for speed’, racing historic muscle cars and establishing himself as a professional drag racer of some repute.

Carl’s personal best at drag racing is 5.9 seconds for the quarter mile at 251mph. This gifts a person an invaluable understanding of the physics and forces at work when travelling at high speed. It’s something Carl only appreciates more whenever he’s at the TT.

‘It’s one thing watching on TV,’ says Carl, ‘but when a bike is going past at that speed, it literally takes your breath away. Being trackside at the TT and getting that close gives you a much better awareness of what’s really going on there. The energy created from the bikes travelling at those speeds is phenomenal. It attacks the senses and that’s what I go back for.’ 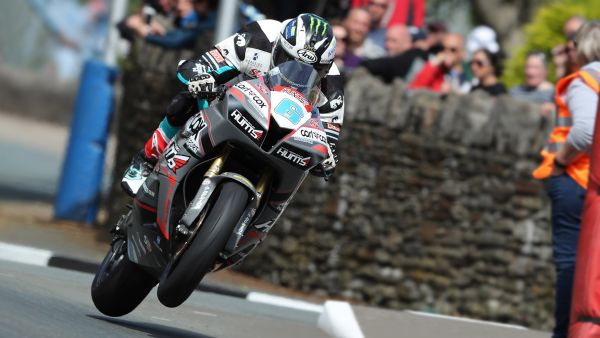 Michael ‘attacking the senses’ as he flies through St Ninian’s Crossroads on his Carl Cox Motorsport-backed Supersport machine.

A popular presence in the TT paddock, Carl displays a love and understanding of motorcycling that the racing fraternity are quick to acknowledge. The way he values amateur racing too is something that chimes with road racing fans, in particular, who continuously follow the career paths of the freshest faces. But it’s a two-way street and, whilst taking a little more time than many to finally disembark on ‘Mona’s Isle’, this ‘celebrity’ fan is as smitten as anyone with the island and its biggest event.

‘There’s no place on earth that has the same ability as the Isle of Man does to make you feel at home,’ says Carl. ‘Even during a major event like the TT, with people from all over the world descending on the island, the hospitality on display by the residents who live there is simply outstanding and I love it.’

With thanks to Noah Bovenizer