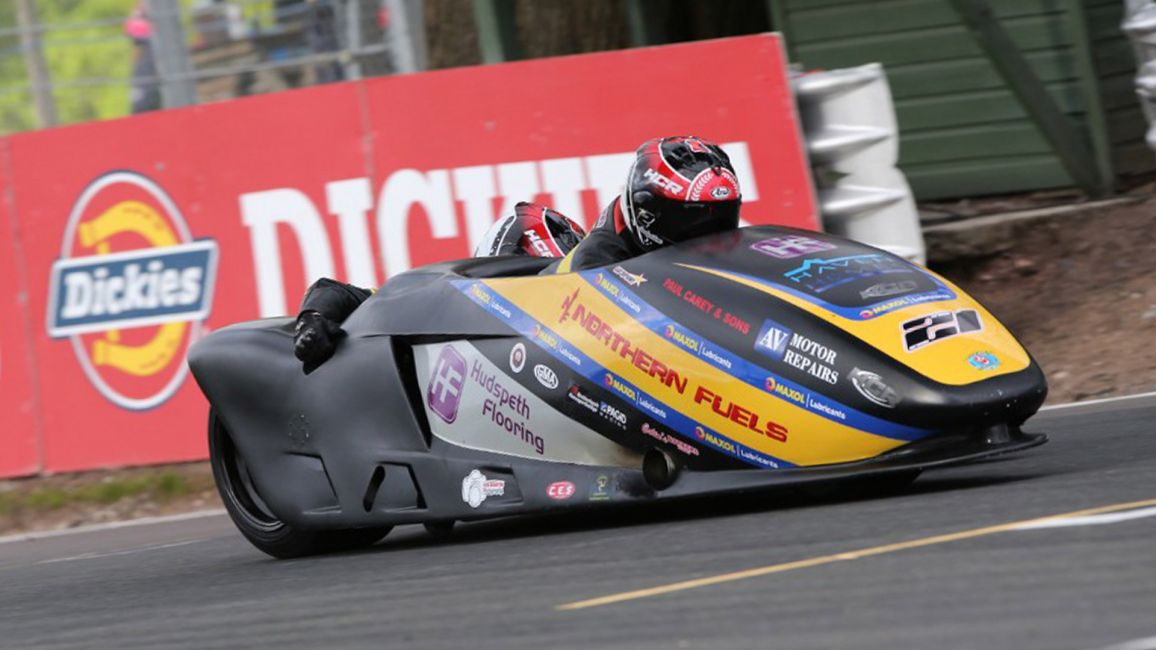 Manx brothers Ryan and Callum Crowe made their debut in the opening round of the 2019 British Sidecar championship at Oulton Park over the May Day Bank Holiday weekend, but an impressive run came to a premature end as they were forced to retire after just three laps.

In a high-class field of outfits featuring a host of World Championship crews, the Crowe brothers rode well during free practice and qualifying to start their race from a seventh-row grid position as the thirteenth fastest pairing.

But going into the third lap, they pulled over when they encountered a problem with the outfit.

Ryan explained: “We think the engine dropped a valve so pulled off to prevent further damage. It’s disappointing to have to retire as we were going well. But we have learned a lot from riding in such a high-class field and will take that experience with us to the next round at Brands Hatch in June, and to the TT in a couple weeks’ time!”

The brothers are to make their TT debut at the 2019 Isle of Man TT Races fuelled by Monster Energy in the two Locate.im Sidecar Races.

Originally intending to debut in 2018, the brothers had to postpone their plans by twelve months as younger brother Callum had yet to acquire the required licence in time for last year’s event. Nevertheless, the additional preparation time puts them in a much stronger position both in terms of their experience and the performance of their outfit.

Ryan said: “It’s 10 years since Dad last competed at the TT so it’s quite appropriate that Callum and I will make our debut this year and ever since I was a kid, competing at the TT is all I’ve ever wanted to do. A lot of hard work has gone in to getting us here but we feel ready now for the challenge that lies ahead. With Dad being both a former driver and passenger, he’s in quite a unique position so has been able to give the two of us a lot of advice and although the Triumph isn’t a widely used machine, the engine’s very strong and has run faultlessly last year so we can’t wait.”

Callum added: “It’s always nerve-racking for any newcomer but I’m really looking forward to it and although we wanted to do the TT last year, I think it’s a good thing that we’ve waited another year as we’re a lot more prepared this time around. I’ve been getting plenty of advice off my Dad in terms of where to be on the outfit and how it will feel like, while TT Rider Liaison Officer Lee Cain has been a great help as well. We’ve done a lot of development work on the bike and while I’d love to be the fastest newcomers, we’ll do what we can and enjoy it.”