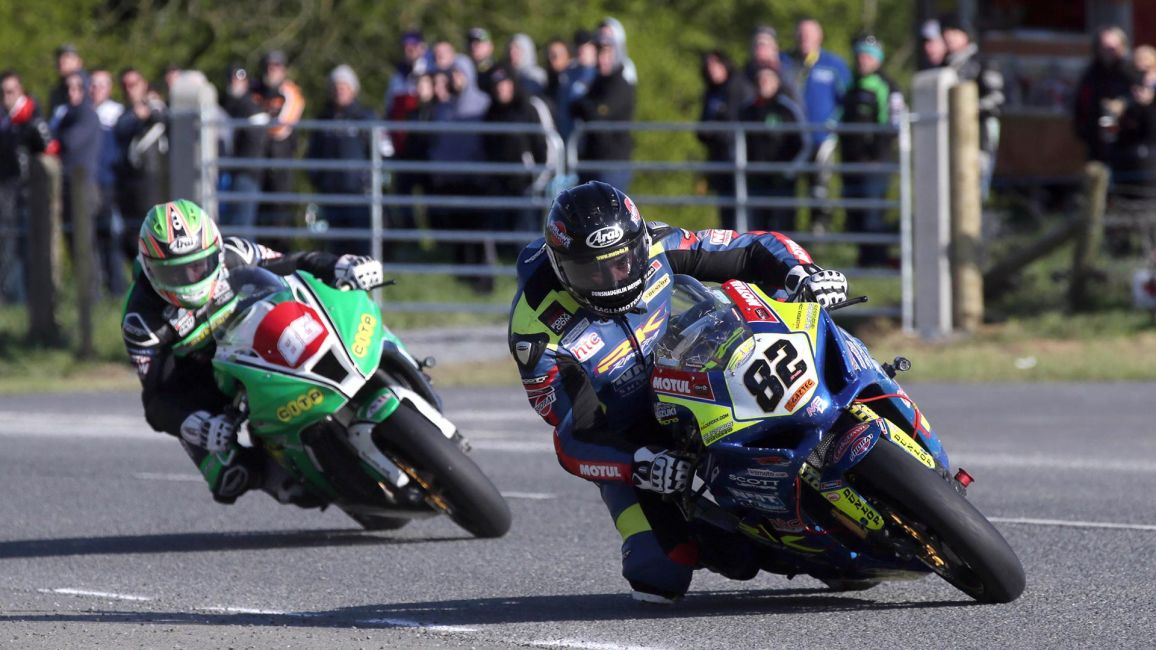 There was more success for the Burrows Engineering/Richardson Kelly Racing team at the Tandragee 100 in County Armagh on Saturday, as Derek Sheils won the Open Superbike race – his second victory of the season on the Suzuki GSX-R1000.

Sheils, who won the corresponding race at the Cookstown 100 the previous weekend, also finished a close runner-up in a thrilling Tandragee 100 Superbike event, missing out on the win by only 0.195 seconds after a race-long battle with Derek McGee.

In the Open race, Sheils sat behind McGee before making his move on the final lap, hitting the front and opening a small advantage which he held to the finish to sew up another Irish National Road Racing victory. He was in contention for a Superbike double in the final race of the day, swapping places with McGee for the full race distance. At the end of their race long battle it was McGee that edged it, taking a narrow win over Sheils.

The team’s second rider, Tom Weeden, was a newcomer to the undulating Tandragee course. The former Senior Manx Grand Prix winner had a best finish of 14th place on the Burrows Engineering/RK Racing Yamaha in the Supersport race, as he continued his preparations for the 2019 Isle of Man TT Races fuelled by Monster Energy.

The team now head to the North West 200, in final preparations for the Isle of Man TT which gets underway in less than three weeks’ time.

Team Principal, John Burrows said: “It was nice to win again with Derek in the first Superbike race. Derek was a close second in race two and it would have been the icing on the cake to win it, but fair play to Derek McGee because it was a fantastic race that could have gone either way. For Tom, it was another big learning curve at the weekend. It’s difficult to be on the pace straight away at an Irish National Road Race, but Tom took a big chunk of time out of his times from qualifying on Friday, which showed good progress. I am happy enough with his approach because he is being sensible and not trying to force things too much. His focus is primarily on the Isle of Man TT but before that, he has the North West 200, where he has raced before.”

Derek Sheils: “I felt I had the pace in the second Superbike race but I couldn’t get a free run at the front because every time I got past Derek McGee, he was snapping right back at my heels. It stopped me from getting into my rhythm and I might have been able to pull a gap if I stayed ahead of him for lap, but he hit straight back every time. I’m not too disappointed because it was a great race in front of big crowds, and it’s always nice to be involved in a race like that.”

Tom Weeden: “I enjoyed Tandragee and I was able to get more time on the bikes compared to Cookstown because it’s a much longer track. It’s like a mini TT really and it was a mega place to race around. I’m just learning the bikes all the time and trying to get used to the extra power of the Suzuki GSX-R1000, because I don’t have much experience on a thousand. For me, the main events are the North West 200 and Isle of Man TT, so it’s been in the back of my head not to do anything stupid and risk injuring myself at this point in the season. The Supersport class is probably my best class at the moment but I improved my times every time I rode the bikes at Tandragee, which is a positive. I missed the North West 200 last year but I’ve been there before, so it shouldn’t take me too long to get back up to speed and it will be more good testing time on the bikes before the TT.”