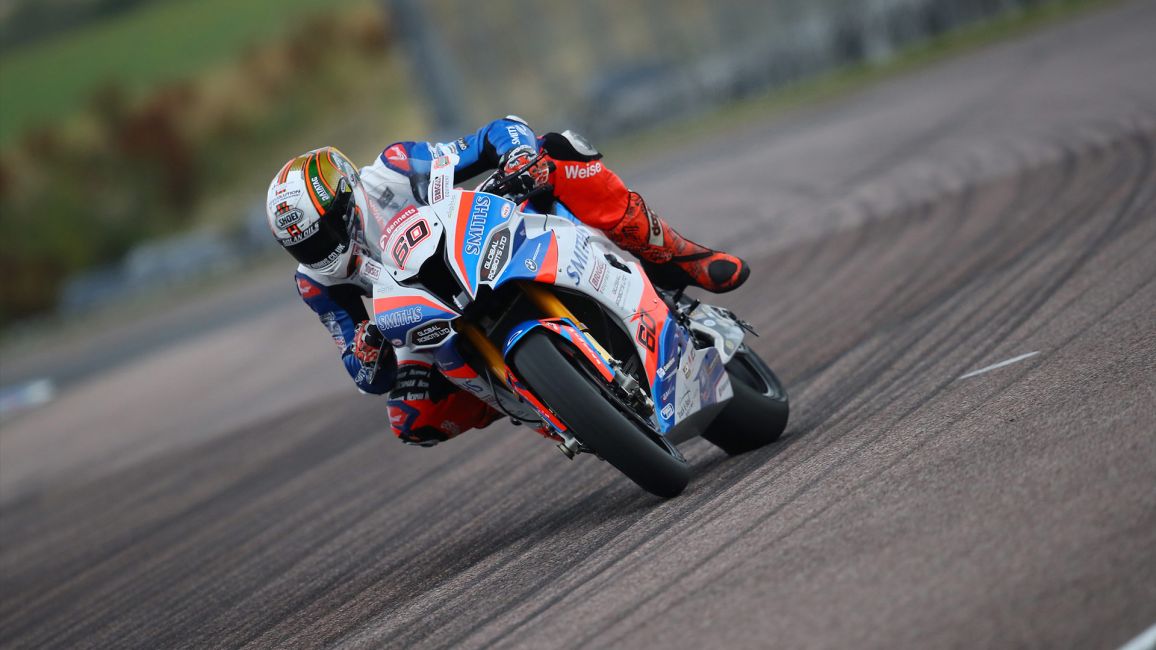 PODIUM FOR HICKMAN IN THRUXTON BSB

Round seven of the 2019 Bennetts British Superbike Championship saw Smiths Racing BMW in action at their local round at Thruxton and it proved to be a highly successful meeting for the team as TT lap record holder, Peter Hickman took his and the team's first podium of the season.

With four podiums from the last four races at the high-speed Hampshire venue, Hickman was firmly aiming for a big haul of points and he signalled his intentions from the word go and, after topping the timesheets in both of Friday’s free practice sessions on the Smiths BMW S1000RR. His strong form carried through to qualifying where he qualified in an excellent third place for Sunday’s opening race.

Hickman was subsequently in a confident mood heading into Sunday’s races and the first 20-lap affair saw Hickman in the leading group and battling throughout the race whereby he ended up in fifth place.

With lap times extremely close and the race two grid determined by fastest laps from race one, Hickman lined up in eighth place and in the middle of the third row.

After a strong start and once the field had settled, Hickman found himself just half a second behind race leader and former Norton rider at the TT, Josh Brookes, but on lap nine the race was stopped due to spots of rain falling. Re-started over the shorter distance of 13 laps, Hickman was running in fourth position when the red flag came out again – this time for an oil spillage from Tyco BMW’s Glenn Irwin.

The eventual race restart came down to an eight-lap sprint, with Hickman running in the top four throughout and after a race long battle with paint exchanged on a number of occasions, he ultimately took third place to give the 2019 Smiths BMW S1000RR its first BSB podium of the season.

The results saw Hickman end the day in eighth overall in the championship standings, now just 16 points adrift of sixth place and the final Showdown position.

Peter Hickman said: “We’ve been fast all weekend and have been quick right from the very first practice session so it’s good to end the weekend with a podium as it’s the least we all deserve. Race one didn’t quite go to plan as I got pushed onto the kerbs at the chicane near the end which although I clawed back the ground I lost; I ran out of time to get into the top three. Race two was a lot better but it was hectic and there was a lot fairing bashing between myself and Andrew Irwin whilst I was also down a bit on speed with the stock engine. It was hard to overtake so third is a great result and it’s great to be back on the podium.”

Darren Jones, Team Co-ordinator, added: “It’s been a pretty good weekend overall and Peter started it strongly on Friday and was fast straight out of the box which is always a good sign. We were a bit apprehensive coming here as we knew the stock engine would be down a bit on top end, but we made some improvements to the bike in a number of areas which helped considerably. Our race pace was good but a coming together at the chicane lost him some time and fifth was the end result. Race two was exciting to say the least but he got stuck in and it was great to be back on the podium and give BMW their first BSB podium with the new Smiths BMW S1000RR.”

Hickman and the team now head to the Ulster Grand Prix with practice getting underway around the 7.4-mile Dundrod road circuit on Wednesday 7 August, followed by the next round of the Bennetts British Superbike Championship at Cadwell Park.