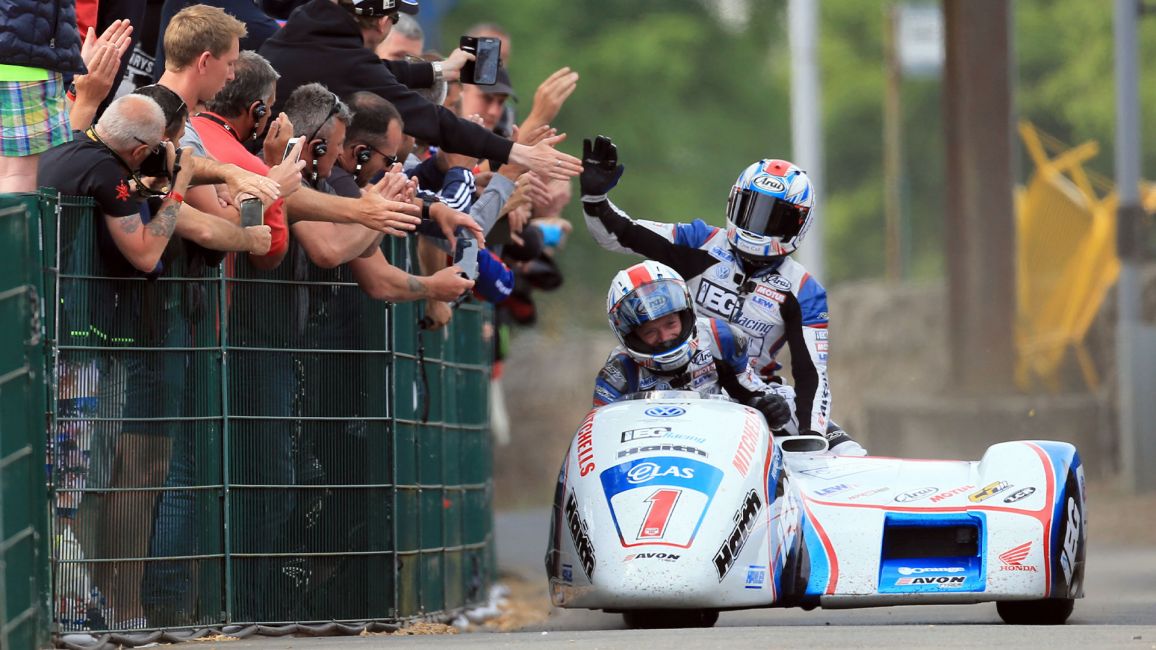 With five straight wins and the outright lap record, Ben and Tom Birchall will again start as clear favourites on their Haith/Live Your Adventure LCR Honda in the two Locate.im Sidecar Races at the 2019 Isle of Man TT Races fuelled by Monster Energy.

Having dominated the opening round of the British Sidecar Championship, the Birchall brothers will be looking to maintain their form from recent years around the 37.73-mile circuit and add to their impressive haul of eight TT wins.

The usual suspects are queueing up behind them in an attempt to knock them off their perch, with John Holden and Lee Cain of Silicone Barnes Racing, and Tim Reeves and Mark Wilkes of Tim Reeves Racing having almost broken the 118mph barrier twelve months ago in their pursuit of the Birchalls.

The duo are both LCR Honda mounted, similar machinary to the Birchall’s, but know they have to up their game even more and increase their lap speeds considerably if they are to get the better of the Nottinghamshire brothers.

Manx legend Dave Molyneux (DMR/A&J Racing) will also be firmly aiming for the top step in 2019 after a couple of relatively lacklustre years by his high standards. He hopes a switch to an LCR chassis, along with new passenger Harry Payne, will complete the ingredients he needs to take an unprecedented 18th TT win. Molyneux celebrates 30 years since his first TT win in 2019 and starts at number seven, the number he had for that first success in 1989.

Chasing their maiden victory are the Cheshire brothers, Alan and Pete Founds, with Jake Lowther and Jevan Walmsley respectively in the chair. Lewis Blackstock and Patrick Rosney are another pair looking to challenge for the podium, following a strong showing in 2018.

All three pairings have been in the ascendancy in recent years, with the Founds brothers having already stepped onto the podium. But the young pairing of Blackstock and Rosney are definite ones to watch as they come into their fourth year at the TT. Finishing third in the first British Championship round at Oulton Park, the pair arrive on the island in confident mood.

Harrison and Winkle are, of course, former race winners with Ramsden and Bryan having both previously achieved top four finishes.

One driver hoping to get amongst the top six this year will be the fastest female driver ever around the Mountain Course, Estelle Leblond. Having lapped at more than 110mph for the first time in 2018, she’ll be hoping to go even better this time around with new passenger Frank Claeys. There’ll campaign the Optimark Road Racing Suzuki.

Other teams more than capable of getting in amongst the top ten include former European Champion Gary Knight with Dan Evanson in the chair, Wayne Lockey and Mark Sayers, the returning Rob Handcock and Ken Edwards, rapid locals Darren Hope and Lenny Bumfrey, and veteran Greg Lambert partnered this time by Ben McBride.

Michael Jackson, last year’s best newcomer, has Sarah Stokoe alongside him for his second TT campaign. The father-and-son combination of Gary and Darryl Gibson will look to break the 110mph barrier this year having been just a whisker away in 2018.

As always, there’s a strong overseas contingent looking to make their mark including Australians Mick Alton and Stephen Bonney, and Darryl Rayner and Wendy Campbell, plus the French pairing of Francois Leblond and Marlene Couillard. Newcomers getting their first taste of the TT in 2019 include the Irish pairing of Mark Codd and Liam Gordon, Kevin and Steve Morgan and Manx brothers Ryan and Callum Crowe – sons of former five time winner Nick Crowe.

Meanwhile, leading solo competitor Maria Costello will tackle the Mountain Course for the first time on three wheels with the experienced Julie Canipa in the chair.