BSB ROUND ONE ROUND UP

Some of the TT's biggest names were back in racing action for the Round 1 of the British Superbike Championship and its support classes at Donington Park. Find out how they all got on below.

It was a tough opening weekend for TT lap record holder Peter Hickman, who’s return to action in the Bennetts British Superbike Championship was hampered by persistent braking issues around the Donington Park circuit. 12th and 11th-place finishes were the best a frustrated Hickman could achieve.

However, Glenn Irwin, who was poised to make his TT debut at the 2020 event prior its cancellation, had a far more productive weekend with his new Honda Racing team, with three 2nd-place finishes leaving him top of the standings after round one.

For a full round up of the Superbike class, click here. 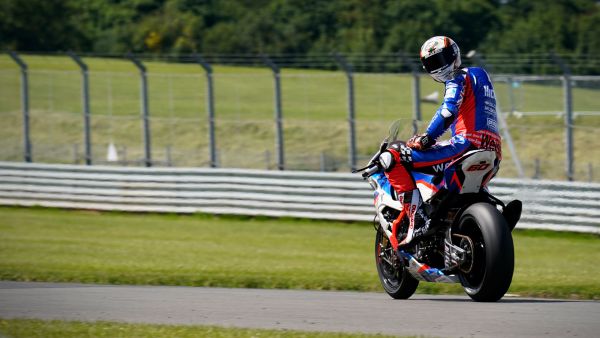 Peter Hickman was left looking for answers as set up issues under braking cost him places at the opening round.

The highly competitive 1000cc Superstock class saw a bumper entry of 42 riders take to the grid, with seven of the TT’s front runners lining up at the 1.95-mile Donington Park National Circuit.

The stand out performer in the production-based class was Honda Racing’s Davey Todd, who took his all new Honda CBR1000RR-R Fireblade to 9th and 10th place finishes in the weekend’s two races, having not raced at national level since competing in the 2016 Supersport series.

After the weekend, Todd said: “In all honesty if someone had said at the start of the weekend a top-10 for my first races back, I would have taken it, but as we've worked through the weekend I knew a lot more was possible, so I thought we were going to be more competitive. We need to work on a few things but we're making progress with the Fireblade and making progress with me, most of all, but we'll be strong at the next round” 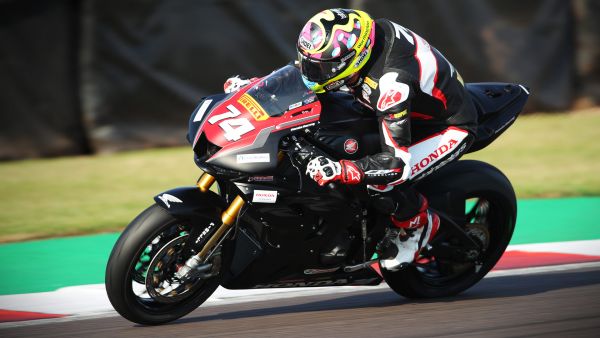 After his Silicone Engineering Racing team opted not to contest 2020 Superbike Championship due to the COVID-19 crisis, 2019 Senior TT Race winner Dean Harrison made his first appearance in the 1000cc Superstock Championship, running his own Kawasaki ZX-10R under his own Harrison Engineering banner.

Qualifying in 31st place, Harrison progressed to 20th position in race one, but didn’t take to the grid for the second race on Sunday. 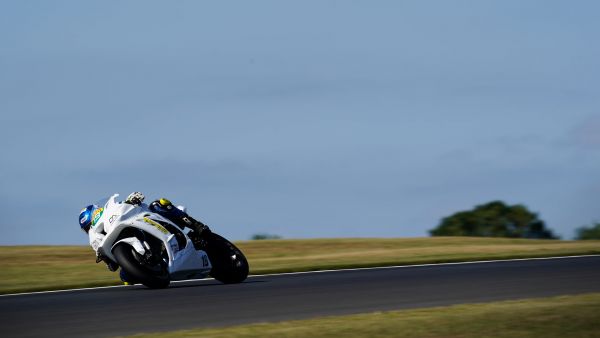 A first appearance in the British Superstock Championship for Dean Harrison, riding his own Harrison Engineering Kawasaki

19-time TT race winner Michael Dunlop, who was due to contest the 2020 TT Races with the VisionTrack Ducati team, lined up onboard a Suzuki GSX-R1000 for the Hawk Racing team. The Dunlop-Hawk pairing have a distinguished history at the TT Races and it’s a team the road racing legend has an excellent relationship with.

Qualifying in 33rd position, Dunlop enjoyed a strong opening race to finish in 22nd place and improved further in race two when he crossed the line in 20th. 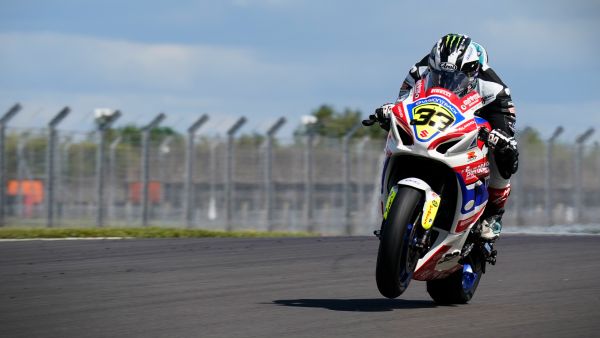 After two years with Honda, 16-time TT race winner Ian Hutchinson was back onboard a BMW for the Edwards 1902 team. Hutchinson qualified in 16th position but dropped to 17th at the flag for the opening race, before opting to sit out the second race at the end of the day on Sunday.

Craig Neve of CN Racing finished 16th in race one but crashed out in race two, while Rob Hodson, who was making his first appearance for the Dafabet Devitt Racing Team failed to finish race one and finished race two in 23rd place. 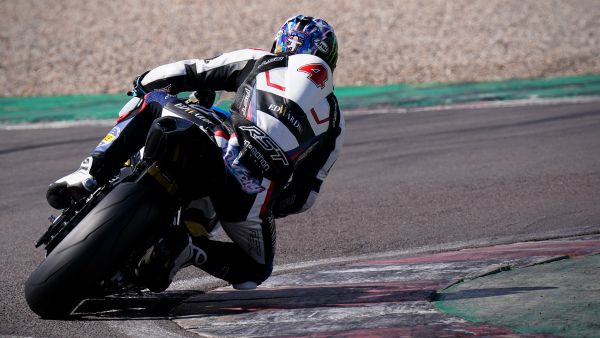 Ian Hutchinson in his debut appearance with the Edwards 1902 team

The joint 600cc Supersport and GP2 field saw Ashcourt Racing’s Lee Johnston as the sole TT competitor in the opening round of the Supersport class. Last year, Johnston used the championship as an opportunity to get dialled in with his then-new team and he did so to great effect, taking multiple top-6 finishes and finding superb form that took him to a maiden TT victory in the 2019 Monster Energy Supersport Race 1.

However, the Ulsterman endured a tough weekend at Donington Park, struggling with arm pump throughout the weekend which was likely brought on by the lack of racing action during the COVID-effected season. Johnston qualified in 13th position for the opening race and climbed up the leaderboard to 11th by the chequered flag. The arm pump persisted for the second, longer race and, after fighting his way through to a best position of 7th, Johnston retired on lap 11.

In the GP2 class, Joey Thompson, who was due to make his return to the TT in 2020 after a two-year absence, made his debut with the Spirit Motocorsa team. Qualifying 19th overall, came home in 15th position after race one and 12th position for race two, 6th and 5th in class respectively. 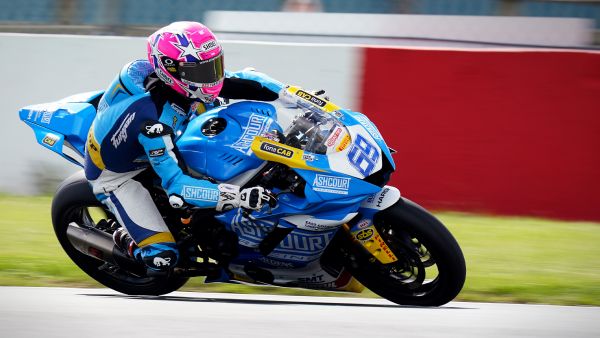 The Ducati TriOptions Cup saw the long-awaited return of 23-time TT winner John McGuinness to British Championship racing, as he lined up on the 955cc Ducati Panigale V2 for the Lund Group team, established by friend and former Speedway ace, Andre Compton.

After a strong showing at the 2019 Macau Grand Prix onboard the 1000cc, 4-cylinder Ducati V4R, McGuinness was tipped for a good result in the single manufacturer series and quickly settled in to the more relaxed nature of the Ducati Cup Championship.

Qualifying 7th, just over a second off the front row, the 48-year old couldn’t quite match the pace of the leading quartet but was comfortably the strongest of the chasing pack, coming home in 5th place. Despite setting a faster lap time in race 2, McGuinness crossed the line in 7th.

After the weekend, McGuinness said: ‘It’s been a long time since I’ve competed on the UK short circuits but it felt really good to be back and I’ve really enjoyed the weekend. We have some iconic circuits in Britain so it feels good to be part of the scene again and I’ve learnt a lot over the course of the three days both in terms of the bike and the competition.’

‘There’s some good, fast lads in the championship with some impressive results on their respective CV’s and every domestic support series is extremely competitive so to finish with a fifth and a seventh is very pleasing. Every day’s a school day with the bike but I didn’t make any mistakes in either race and got two, solid finishes under my belt. It gives me plenty to build on so we’ll roll on to the next round and see if we can get closer to the podium.’

Lincolnshire’s Craig Neve also made his Ducati Cup debut at the opening round, qualifying just ahead of McGuinness in 6th position onboard the CN Racing machine. Unfortunately, an electrical issue halted his progress in the opening race and the 29-year old finished in 11th place. But Neve and the team regrouped to put in an excellent performance for race two, setting the fastest lap of the race and securing a 3rd place finish. 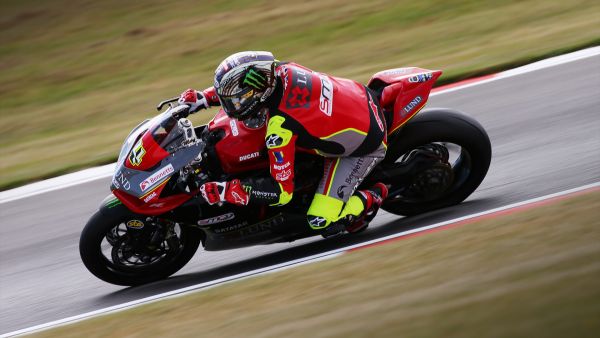 John McGuinness had an excellent first showing in the Ducati Cup - his first British Championship race in 10 years. (Image courtesy of Bonnie Lane)

After a lengthy layoff following an accident at the 2019 Tandragee 100 where he sustained multiple injuries, Adam McLean made his racing return with the Binch Racing team in the Superstock 600 class.

McLean, who took a third place finish in the class at Brands Hatch in 2018, joins David Binch’s team with whom he took an impressive second place in the 2018 Classic TT Lightweight Race onboard a 250cc Yamaha.

Qualifying in 14th position, McLean got a poor start in the one race of the weekend and was relegated to 30th and last place. An encouraging fightback saw the 24-year old climb back up the leaderboard in a highly attritional race, and he ultimately crossed the line in 13th position.

Enjoyed this article? Subscribe to the TT Races Newsletter for the latest news delivered straight to your inbox!