Our virtual tour around the TT Paddock continues with a look at the history and success of Michael Dunlop’s MD Racing team.

Although Dunlop had run his own team before, the first time MD Racing officially appeared on the TT entry list was in 2013 - the year Michael rode for the Honda TT Legends team alongside John McGuinness and Michael Rutter in the Superbike and Senior Races. He upstaged both to win the Superbike TT before taking second behind McGuinness in the Senior.

However, for the Superstock and two Supersport Races, Dunlop would ride for his own, newly-formed MD Racing team using Honda CBR1000RR and CBR600RR machinery in the two classes. He did so to devastating effect, winning all three races. 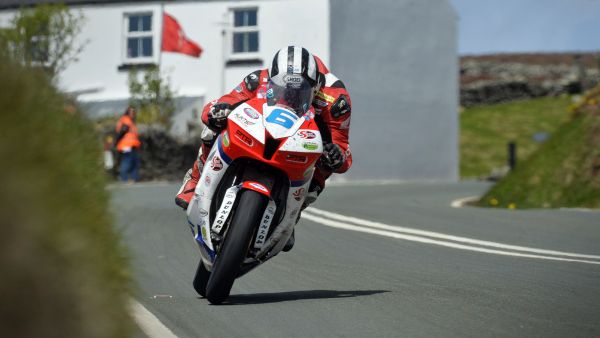 2013: The first official outing of the MD Racing team at the Isle of Man TT. Dunlop took victory for the team in both Supersport Races and the Superstock Race, with another race win in the Superbike Race for the Honda TT Legends team

The outfit was a continuation of the relationship between Dunlop and Irish businessman Gary Ryan who, alongside Martin Marlow of Marlow Construction, played a pivotal role in establishing Dunlop’s road racing career, but it was also the first year of a new relationship with the PTR Honda World Supersport 600 Team.

Riding a World Supersport specification Honda CBR600RR, which ran with sophisticated electronics including traction control which was permitted at the time, Dunlop won both Supersport Races setting a new lap record of 128.667mph – a record which stood until 2018 when Dunlop broke it himself. 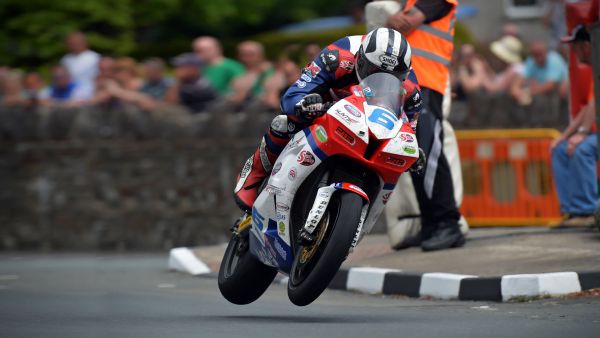 2013: Dunlop was dominant in the Supersport class, setting a new lap record of 128.667mph that stood for five years

The Superstock Race that year was equally rewarding for Dunlop and MD Racing as he not only won but also set a new lap record of 131.220mph, a lap and ride that TT Legend McGuinness recently declared as one of the best ever performances in the class.

For 2014, Dunlop left the Honda TT Legends team to begin a new chapter with BMW. While the Hawk Racing team prepared his Superbike and Senior machine, his BMW S1000RR Superstock and Honda 600 Supersport bikes were run under the MD Racing banner.

The opening Supersport Race was not a vintage performance for Dunlop, finishing third behind Gary Johnson and Bruce Anstey. In a determined mood, Dunlop went into the following Superstock Race and looked comfortable from the start. He caught Anstey, who had set off ten seconds earlier, on the road and monitored his pitboards to keep a hard-charging Dean Harrison at bay to take victory by 20 seconds. TT win number five followed soon after for MD Racing, as Dunlop led from start to finish to beat Anstey by 10 seconds in the second Supersport Race of 2014. 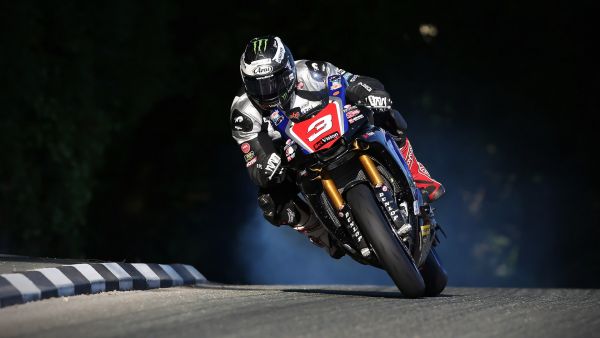 2015: Dunlop and the MD Racing team ran Yamaha's, but only until Thursday of Qualifying Week...

The following year would be a far more trying occasion for the Dunlop and the MD Racing team. A big move to Milwaukee Yamaha to pilot the new YZF-R1 fell apart during practice week, with Dunlop walking away from the team just two days before the opening Superbike Race.

An eleventh-hour call to the Hawk Racing team and Dunlop was back on the previous year’s BMW for the Superbike, Superstock and Senior classes. However, the lack of practice and a crash at The Nook in the opening Superbike Race severely blunted his perfromances throughout TT 2015. Dunlop was able to record another podium with a second place in the Superstock Race on the MD Racing BMW, but it wasn’t a match to the 4 victories previously taken in both 2013 and 2014. 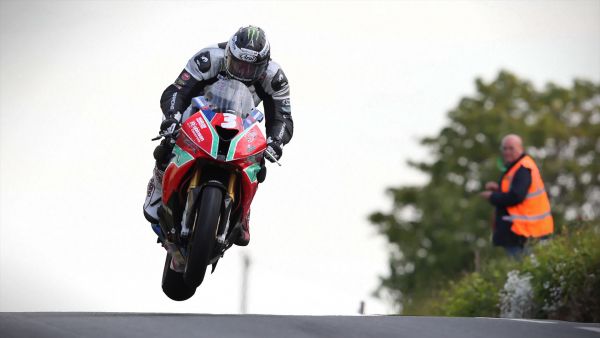 2016 saw Dunlop continue with Hawk Racing BMW in the Superbike and Senior classes and he romped to a ‘big-bike’ double, increasing the lap record to a speed of 133.962mph as he became the first person to ever lap the TT Course in under 17 minutes.

Dominance with Hawk Racing in the blue-riband classes couldn’t be matched by the MD Racing team in the Supersport and Superstock classes though. Dunlop crossed the line second in the opening Supersport Race only to fall foul in the post-race technical inspections when it was found the cam buckets of his Yamaha R6 had an illegal coating. The coating had been legal two years earlier when the enginie had been built, but new-for-2016 rules meant that Dunlop was excluded from the results. 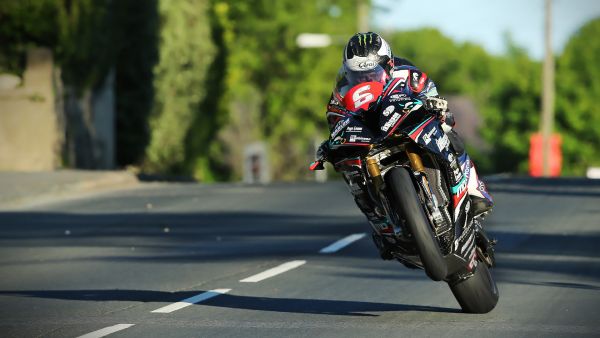 2016: Dunlop did the Superbike-Senior double for Hawk Racing, but didn't get the same results on his MD Racing Superstock and Supersport machines

A retirement followed in the Superstock Race when the gear shifter broke on the MD Racing BMW, but some honour was restored with a second place in the second Supersport Race using a new engine loaned to Dunlop by the Appleyard Macadam British Supersport team.

Another TT and another manufacturer for Dunlop in 2017 when the Hawk Racing Team switched to the new Suzuki GSX-R1000 and the MD Racing outfit followed suit.

A weather-disrupted TT meant a revised schedule with only one Supersport Race that year, and Dunlop used all of his race craft and experience to overhaul James Hillier in slightly damp conditions and give MD Racing their sixth TT win. The underdeveloped Suzuki, however, proved to be uncompetitive in the four-lap Superstock Race with Dunlop rolling in sixth.

Needless to say, Dunlop switched back to BMW for 2018 where the MD Racing team was now enjoying support from Carl Cox Motorsport, with the renowned DJ stepping up his sponsorship within the sport. He was immediately rewarded too as Dunlop won the first Supersport Race in record breaking style, beating his own five-year lap record with a speed of 129.197mph. 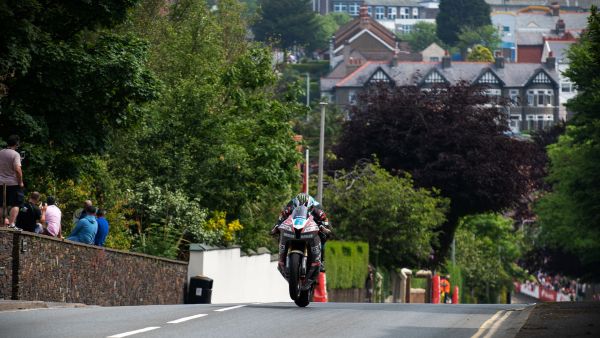 2018: Back on a PTR-prepared Honda, Dunlop set a new Supersport lap record of 129.197mph on the way to victory in Supersport Race 1

He was back on a 600cc PTR Honda for the event and although a pit lane speeding penalty meant he couldn’t replicate the result in race two, finishing fifth, another podium had been taken in the Superstock Race where he finished a close second to Peter Hickman.

2019 would prove to be a more challenging meeting for a variety of reasons. A broken wrist sustained in a testing crash leading up to the event was compounded by inclement weather throughout the fortnight and although Dunlop did win the Lightweight Race for the first time with the factory Paton team, he was unable to add to MD Racing’s run of success with a best result of fourth coming in the Superstock Race.

Nevertheless, with a total of seven wins and eleven podiums since they first took their TT debut in 2013, there can be no doubting the success already achieved by MD Racing around the TT Mountain Course. 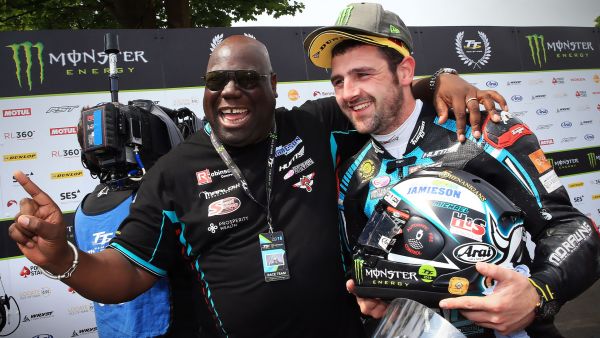 2018: Superstar DJ Carl Cox has been title sponsor of the MD Racing team since 2018